MacRumors Forums, the discussion boards for the MacRumors family of sites, has reached another milestone: four million forum posts.

The 4,000,000th post was made by member MisterMe at 9:53 AM EST on Saturday, August 4, 2007, in a thread named It's not great viewing photos in the Finder, is it? in the Mac OS X forum. Congratulations, MisterMe, and congratulations, MacRumors!

MacRumors.com opened on February 24, 2000, as a site to consolidate interesting Apple news and rumors. The current forum system opened in April, 2001. The MacRumors forums now have over 100,000 members and over 300,000 threads, with thousands of posts each day about Apple news, speculation and rumors, questions and answers, special topics such as design and graphics, and general discussion. 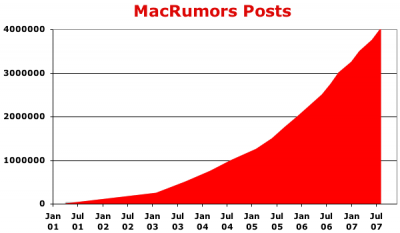 We thank those who visit the MacRumors sites, participate in the forums, and make MacRumors the popular web destination and daily news stop for so many.

We'd also like to thank our staff for all their hard work:

Congratulations,
Nice exponential growth too!
A

you're one in a million, yeah that's what you are

Well done! Thanks to all the who keep the site going for the past, current, and future contributions to keeping this one of the best mac destinations on the net.
R

I'm sure I speak for many when I raise my glass of Tequila and say thanks to all the administrators, moderators, etc. for the hard work done to make this site the excellent destination that it is.

I've found no other forum site on the web that has such a community spirit and is so well run. The forum software delivers the impression of a rock solid and bulletproof environment and the moderators seem to cut just the right amount of slack to keep the forums interesting with the feeling that one has freedonm to speak one's mind.

Thanks to All and lets look forward to Five Million!
M

I listened to that very track this morning! Sweet

Congrats and thanks to Arn and the MacRumors team for providing a great place to stop by for mac news and for trading useful information.
A

Congratulations from one of the old timers! (I remember the One Million Posts avatar contest, plus many other happy times spent here.)

By far one of the contributing factors to the huge upswell in viewership and contributions has to be the iPhone. The last time I remember being so rabidly involved in a Mac product / rumor was the first redesign of the iMac. Thousands haunted the boards looking for news on that machine - had to be one of the most anticipated Stevenotes in history.

Kudos to MacRumors, "staff" and contributors for making this THE classiest and BEST Apple news-related site on the web, bar none.
T

Here's a special treat for everyone in comemmoration of this joyous event.

w00t! Nine months is pretty ridiculous for a million posts... It's great to see us growing so much. I've been reading MacRumors since about ought three, just wish I decided to start posting back then...

I can see this only accelerating, (as with iTunes downloads), as more people buy Macs and iPhones. I've certainly noticed more and more traffic here recently. Just hope we can cope.
T

Wow, lots of posts, and for good reason!

rijiMacDij said:
The forum software delivers the impression of a rock solid and bulletproof environment
Click to expand...

We've used the vBulletin forum software since 2001 and we've been pleased with how it has supported our growth.

There are always a few people who complain when there are news stories about MacRumors itself. But once every million posts we deserve to boast a bit.

I guess I was here pretty early on - 3 months later - considering the Forums didn't start until April 2001.
D

Doctor Q said:
But once every million posts we deserve to boast a bit.
Click to expand...

Indeed!!! I, for one, am incredibly grateful to everyone involved in running the site - Thanks! You've done a fantastic job! -, and would like to thank all the knowledgeable contributors who take some of their time to explain technical aspects of the rumors that I would never have a clue about otherwise. Thanks, everyone, for making macrumors what it is: The best Mac resource on the net.


Doctor Q said:
We've used the vBulletin forum software since 2001 and we've been pleased with how it has supported our growth.

There are always a few people who complain when there are news stories about MacRumors itself. But once every million posts we deserve to boast a bit.
Click to expand...

Which topic, here, received the fewest negative votes (either actual # or percentage)?

Great work all!!
My one stop site for Apple chatter.

Let me take this opportunity to once again thank the Admins, Mods and Editors for creating such a great community here at MacRumors. It is informative, fun, very well maintained and overall a very "quality" site. I enjoy participating on MacRumors for various reasons and plan to always continue that trend.

It also makes me feel proud to be a contributor to this great site, as I feel MacRumors is truly deserving of it. I get so much from it I have no problems whatsoever in giving something back. And trust me, there are few sites out there which make me feel that way - MacRumors is in the minority in that respect.

So keep up the great work everyone and let's keep growing!

Yes, but how many of those 4,000,000 posts are actually worth reading? These days it seems most posts are useless "me too" or "I'm getting out my credit card" posts. Usually, out of a 10 page thread there are only 3 or 4 intelligent posts. It's getting so bad that I'm starting to skip reading the threads entirely.

I think part of the problem is the insanely high post count required to change status here. People are just posting any crap that comes into their head just to raise their post counts.
J