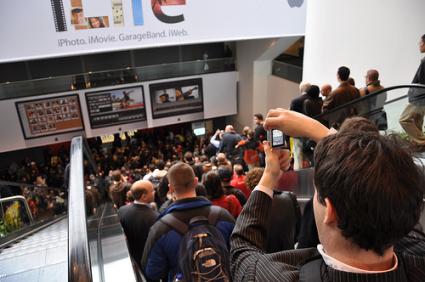 Macworld Expo 2009 officially ended on Friday, and media and attendees have since scattered back to their respective locations. Beyond the product announcements themselves, we certainly enjoyed meeting up with readers and other Mac personalities from around the world. Delicious Monster sponsored a meetup for our readers and the following companies provided giveaway prizes: Dr Bott, Speck, Beejive, Iconfactory, Just Mobile, and Ten One Design. Thanks to them.

The fight for 2010 seems to be on as CNet has confirmed that CES is organizing a Mac-themed area next year and is actively recruiting Mac exhibitors. Meanwhile, IDG/Macworld has already opened expo-pass registration for Macworld SF 2010 and appears to be offering free floor passes at this early date (normally $25-$45).

I look forward to seeing Apple at CES 2010
Comment
Z

amac4me said:
I look forward to seeing Apple at CES 2010
Click to expand...

i still think that apple should attend larger media events so that consumers can compare their devices to competitors ones.
Comment

DARKJ3DI said:
i still think that apple should attend larger media events so that consumers can compare their devices to competitors ones.
Click to expand...

Here's hoping Macworld can find a way to go on and be successful for many years in the future. It's a worthwhile event that deserves to continue.
Comment

KingYaba said:
I think that's what they don't want.
Click to expand...

but why would they not want that though? it shows consumers that there are alternatives to windows pcs and blackberries.
Comment

To clarify people - CES is not open to consumers. It is an industry/press trade show only. The general public cannot get in.

This makes it even less likely, in my opinion, that Apple will go to CES next year.

To me this makes CES sort of pointless, after all, surely it doesn't matter if the press like your product, it matters far more if consumers like it and want to buy it. It can have all the good reviews in the world, but if it doesn't sell, its a flop.
Comment

Yeah, Apple at CES would make sense. That would be a good way to show Mac newcomers why they are so much better than pc's.
Comment
T

sgntscrawn said:
To me this makes CES sort of pointless, after all, surely it doesn't matter if the press like your product, it matters far more if consumers like it and want to buy it. It can have all the good reviews in the world, but if it doesn't sell, its a flop.
Click to expand...

You do not make sense. If I release a product I want full coverage from the media. Why do I care if the people think if the product is good or not... it is already released!

I believe Apple want to compete frontally "in their own ground" against other brands and no play safe on its "own side". They want to reach another market, no reinforced their image on the same people over and over again.

If they come up with a keynote at the CES THAT will call the attention... who knows... probably even with Jobs.
Comment
K

the vj said:
Why do I care if the people think if the product is good or not... it is already released!
Click to expand...

So it sells well?

Just because it is "released" and is an Apple product, doesn't mean it automatically becomes a winner with everyone. The hands on that Macworld provided for consumers is a big deal - especially when it is Joe Bloggs who will be telling us what is good or bad about it.
Comment
W

Out with the old. MacWorld will be relegated to an annual dinner party at a pool hall / restaurant combo with a few dozen mac dorks surfing on their mb airs and listening to itunes while scarfing down their dinner.
Comment
B

Isn't it strange that Macworld wasn't called AppleWorld? There's the Mac, iPods, iPhones, and AppleTVs. Only one of those things is Mac. Maybe they'll just change the name to the Consumer Electronics Show Apple Edition.
Comment
F

Apple (and a few other biggies) will go to CES for any early January press announcements they want to make. The public (fans) will go to a smaller MacWorld to see all the new goodies from the rest of the Mac related industry.

iPod Touches, iPhones, and AppleTVs run Mac OS. It's about the software platform these days.

CES could cost as much as Macworld did and still not fit in Apples "product lifecycle."

I would imagine Apple will NOT have a presence at CES beyond minimal.
Comment
I

It's more that "Macworld" predates all those other devices by many, many years and IDG never had a reason to change the name.

Who knows, maybe they'll change the name next year, but I don't think they will unless they change the focus from Apple products (for one thing, they are allowed to use "MacWorld" with their current agreements, they couldn't use AppleWorld or iPhoneWorld without Apple's permission).

Personally, I don't think Apple wants to share the limelight with others at CES, so they'd never do CES in a big way. now that they aren't doing MacWorld, they might have a presence at CES, but they won't do anything big there.

As for getting press attention... all they have to do is schedule an event and the press shows up these days. The real problem will come when Steve is no longer there, will they still be able to draw the press like they can now? That's when they'll need a "MacWorld" again, IMHO.
Comment

KingYaba said:
I think that's what they don't want.
Click to expand...

amac4me said:
I look forward to seeing Apple at CES 2010
Click to expand...

I don't because I won't be able to attend CES as I am "not in the industry". I will, however, make the 50 mile trek to San Francisco for Macworld 2010 (already got my free expo hall pass) to see what is going to be exhibited and to see what kind of show specials there are.
Comment

I plan to visit Macworld SF again in 2010. Personally, I don't really like to see Apple be part of the CES family. Keep the PR itself, Apple.
Comment
T

Maxington said:
CES could cost as much as Macworld did and still not fit in Apples "product lifecycle."

I would imagine Apple will NOT have a presence at CES beyond minimal.
Click to expand...

What I believe is that Apple felt forced to release a product by the dates of Mac World and that does not full fills their agenda, again, "beating a dead horse". Apple obviously has mayors goals than reinforcing their already won fans.

With the release of the iPhone and the success of the iPod, Apple feels confidence to penetrate other markets and leave their "confort zone". And consider this, having the Mac World so close to the CES I bet they chose to explore the CES better, they can not release new products in both events.

I do feel Apple is being more agressive with their marketing to capture more people now that they are in the mouth of EVERYONE. I mean, I am in Venezuela and 3 years ago just people who were graphic designers and musicians knew Apple products. Today EVERYBODY has an Apple product, an iPod or an iPhone. 3 Years ago there were 3 Mac stores in Caracas, today we have about 10 and one or two in mayor malls. I mean, that is like having a Ferrary dealers every where all of the sudden.


They can not and are not solenly around their Mac Pros anymore, specially when they are expensive and when soon or later the Mac OS will be very popular among PC hardware. They have to expand based on the popularity they have now, specially having such solid ground, period. from that perspective being in Mac World is a waste of time with the CES as a new target. The CES is the best place to run over competition.
Comment

the vj said:
The CES is the best place to run over competition.
Click to expand...

*yawn* if apple presents at macworld or CES, it'll all be the same. software updates, no hardware. both shows conflict with their natural/preferred release timelines. so, who cares. precedent of macworld or a new spot in CES. no matter. blah. just release the sh*t people want and all will be good, apple.
Comment
You must log in or register to reply here.
Share:
Facebook Twitter Reddit Email Share Link
Register on MacRumors! This sidebar will go away, and you'll see fewer ads.
Sign Up
Top Bottom