Over the course of the last week or so, multiple Warner Bros movies that were previously available in 4K have reverted to HD, a change that applies to new purchases from iTunes as well as previously purchased movies.

There are complaints about the change both on Twitter and on the Blu-ray forums, as highlighted by 9to5Mac this afternoon. There are quite a few titles that have reverted from 4K to HD, including all of the Harry Potter movies. 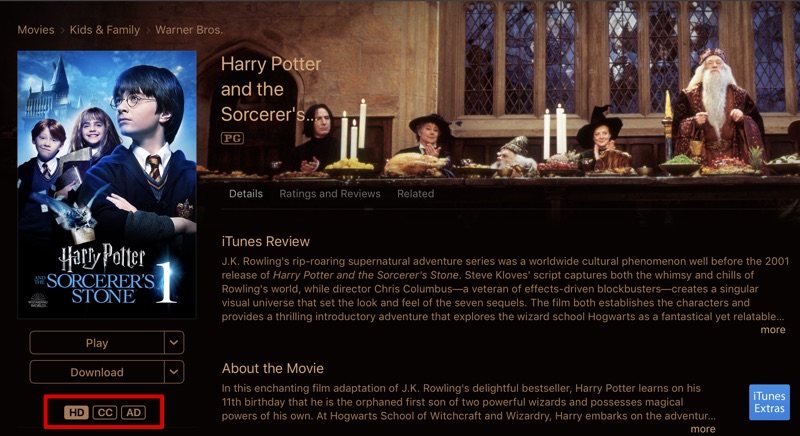 A Blu-ray forums user compiled a list of the known titles that have recently been downgraded from 4K to HD.

It's not clear why these movies are no longer available in 4K, but there have been instances where movies are downgraded to HD and then are later made available again in 4K, so we'll need to wait to see if that's the case here.

Apple has been offering 4K movie titles from a range of different movie studios since the launch of the Apple TV 4K.

Update: This issue may be resolved as it appears many of the movies that were downgraded to HD are once again available in 4K.

Article Link: Many Warner Bros Movies Have Reverted to HD Instead of 4K on iTunes and in User Movie Libraries [Update]

If this is intentional and Warner Bros intends to leave customers with a downgraded version of what was advertised and purchased, this is a lawsuit.
Reactions: pke, Keniutek, CriticalVoice and 32 others

And THIS is why you should still buy movies on disc -- no one can downgrade your 4K UHD Blu-ray disc.
Reactions: baconbuddie, dcslacker, Zenithal and 78 others

Hopefully this is sorted out soon. I can't imagine they would be selling 4K movies and then downgrade them for customers who bought it when it was already 4K. Doesn't make any sense and makes them liable in a lawsuit. Seems like a glitch.
Reactions: poe diddley, Oblivious.Robot, TheDemogordon and 9 others
B

And give you subpar sound. I’d rather have the disc to make sure I’m getting the uncompressed audio.
Reactions: pier, ssgbryan, Robnsn2015 and 9 others

My Harry Potter collection I purchased in 4K is downgraded to HD I just checked. Beyond furious right now
Reactions: flimpy, cbaca51, pmore and 3 others
D

sputnikv said:
If this is intentional and Warner Bros intends to leave customers with a downgraded version of what was advertised and purchased, this is a lawsuit.
Click to expand...

Agreed. If you buy as advertised then get swindled out of the feature promised, you are entitled to at LEAST a refund
Reactions: york2600 and fonzy91
J

Bait and switch. Only question is: Whodunit? Apple or WB?
Reactions: poe diddley, 341328 and apolloa
D

I'd imagine this is a glitch. But it still highlights the problem with digital movies and the associated "rights" you are actually purchasing. You don't really own these movies.
Reactions: pke, iSimx, The Captain and 7 others

There are reports this is impacting movies from multiple studios, so hopefully it is some type of bug and will be re-mediated.

I vaguely recall we have seen this bug happen before (4K to HD or HD to SD).

This is why you should always buy a 35mm print of any movie you want to own. They can't downgrade it to 16mm when it's in your projector!
Reactions: ConvertedToMac, baconbuddie, grs and 38 others
M

I really don't like that digital streaming purchases can be removed all together as well. I need to get a player of some sort and build out a physical library. I just gagged a little... =\ I only rent digital, well I purchase tv series with the mindset it's a rental.

Does Apples TOS authorize them to replace your 4K content with a lower quality copy? Probably. Why is this any different than an iPhone X being replaced by an iPhone 8, or an iMac Pro being replaced with a standard iMac?

I mean. Do you favor a clutter free collection that won’t get damaged. Or not torture your eyes with 1080p instead of 4K in the rare instances. Hmm...
Reactions: BODYBUILDERPAUL
A

Seems like it’s a mistake, or I’d imagine there would of been a warning. Or, I’m naive.
Reactions: BODYBUILDERPAUL
E

Good thing I own all of these on VHS already.
Reactions: LiveM, NightFox, Objectivist and 4 others
2

JetTester said:
Bait and switch. Only question is: Whodunit? Apple or WB?
Click to expand...

WB or whomever the distributor is. iTunes is just a store that sells products from other retailers.

FWIW: Much earlier in 2019, "2001: a space odyssey" was downgraded from 4K HDR to standard HD. Within a couple of weeks, it was back to being 4K HDR again. There was also a brief period of time where "Dr. Strangelove" completely disappeared from the iTunes Store, only to return again later. I called Apple about both of these issues and the reps I spoke to were useless. You can call them if you like to complain about this, but Apple treats most of these people like mushrooms -- they keep them in the dark and feed them sh*t.
I

And this is why I still purchase physical copies for my collection. 9/10 times it comes with a digital copy so I get the convenience of streaming and the video/audio quality provided by disks when I want it.

Often it’s cheaper than the iTunes copy as well. Win win.
Reactions: sjjones, Marekul, The Captain and 6 others

Space is a premium for many people. Think of the dozens of VHS tapes and DVDs you have piled somewhere that you'll never touch again. It's true that owning a physical disc is better, but that too will become just another antiquated medium collecting dust.

There are no perfect options, just what's most convenient in someone's lifestyle or circumstance.
Reactions: Marekul, NightFox, LV426 and 3 others
A

Wow, that’s pretty big, wonder if anyone will own up to it and why? Especially after the way it was promoted.

4jasontv said:
Does Apples TOS authorize them to replace your 4K content with a lower quality copy? Probably. Why is this any different than an iPhone X being replaced by an iPhone 8, or an iMac Pro being replaced with a standard iMac?
Click to expand...

What? If anything, Apple upgrades users to a newer/better version of the hardware vs. downgrading.
Reactions: smoking monkey and dingle19

Mikey44 said:
What? If anything, Apple upgrades users to a newer/better version of the hardware vs. downgrading.
Click to expand...

That was my point. If I buy a 4K copy of a movie and it’s not 4K when I go to watch it, than there is an issue. If my hardware is defective and they replace it with an older model than we have an issue. I see no difference between the two.
Reactions: dhruveonmars, Mikey44 and clayj
You must log in or register to reply here.
Share:
Facebook Twitter Reddit Email Share Link
Register on MacRumors! This sidebar will go away, and you'll see fewer ads.
Sign Up
Top Bottom