Mattress company Casper today revealed its first non-bedding product, called the "Glow" lamp. The device is a 5-inch tall by 3 inch wide HomePod-shaped smart light that connects to your iPhone, allowing you to set sleeping and waking light patterns and encouraging a more restful sleep. The Glow lamp does not support Apple HomeKit. 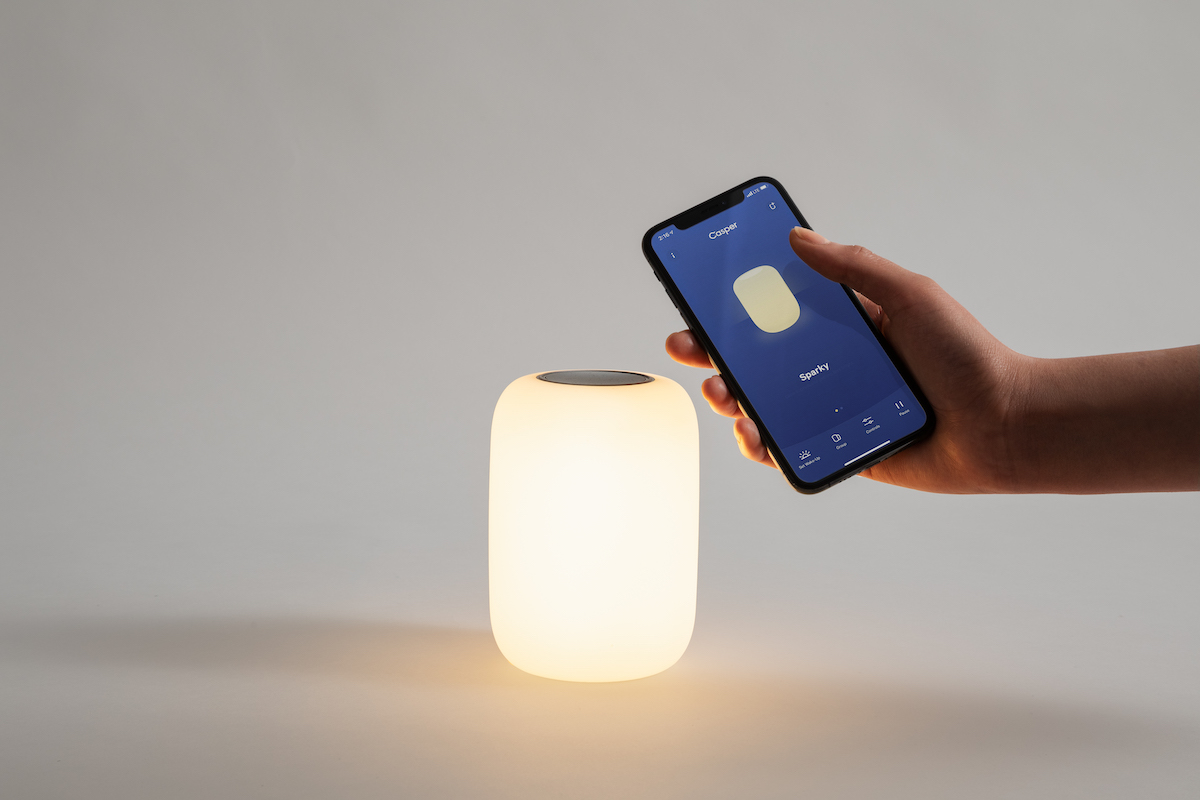 The Glow charges on a wireless charging pad, allowing you to pick it up and move it around freely. Casper says that it was designed to be used when you're the most sleepy, so it has no top side or bottom side, allowing you to place it in any orientation. Flipping it switches the Glow on, rotating it increases or decreases the brightness, and wiggling it will turn on a small amount of light.


Similar to Night Shift on iOS and macOS, the Glow was built to ensure that the user doesn't face any harsh bright lights right before bed, which could disrupt sleep patterns. The default mode on Glow is a 45 minute cooldown that gradually dims the light until there is none, and in the morning it will gently wake you up by filling the room with soft light. 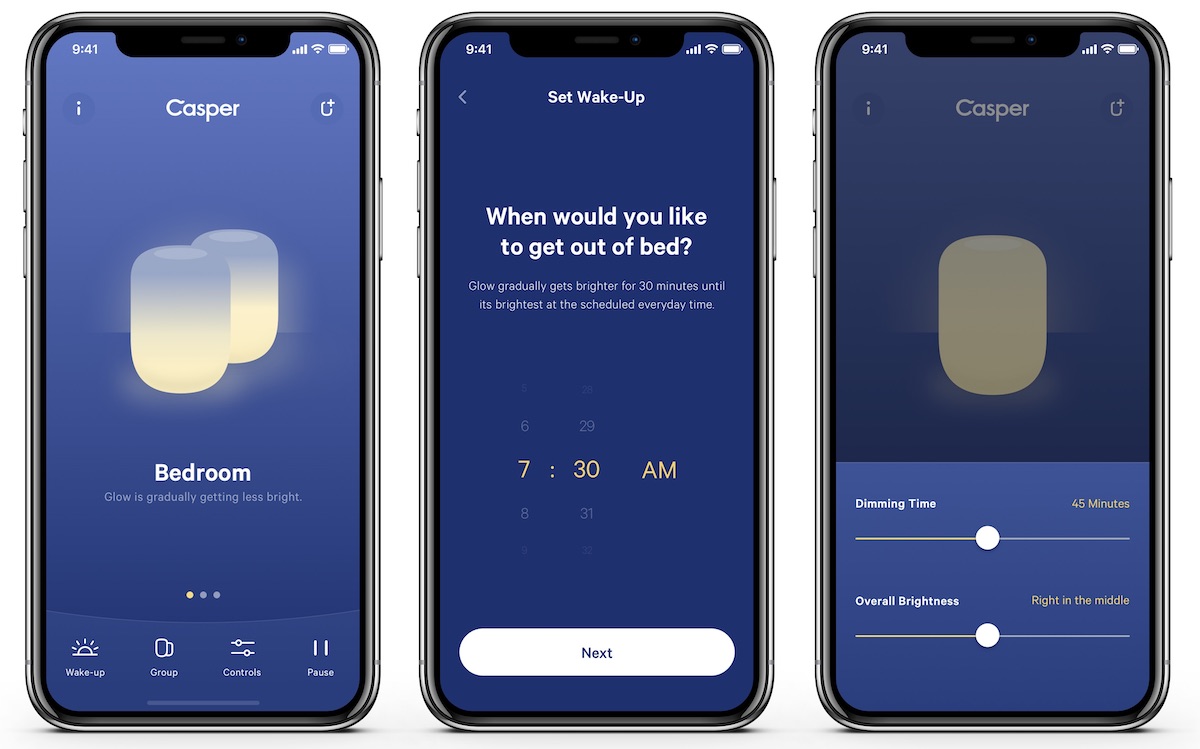 Multiple Glows can be synced in one bedroom, so that when one is controlled they both adjust light to match one another (up to six can be connected via Bluetooth). You can buy the Glow today for $89 in a single pack or $169 in a double pack.

Not supporting HomeKit is the kiss of death for this. Why would I want to download another app just to control a night light? I have other lights in the bedroom that are all HomeKit compatible so they all work in unison.
Reactions: EedyBeedyBeeps, JonnyBlaze, Eneglan and 16 others
T

Ah man, they had me thinking this looks pretty nice. Then start reading "The Glow lamp does not support Apple HomeKit", then it's a no go for me. I don't need another item using it's own app to do stuff. I want everything under one location.
Reactions: JonnyBlaze, Eneglan, skys15 and 4 others

Welp, the HomePod Jr. is adorable.
Reactions: skys15, 0s and 1s, GrumpyMom and 5 others

MonstaMash said:
Not supporting HomeKit is the kiss of death for this. Why would I want to download another app just to control a night light? I have other lights in the bedroom that are all HomeKit compatible so they all work in unison.
Click to expand...

100%. Is it that hard to make it HomeKit compatible? Why do so many vendors not support it?
Reactions: Eneglan and skys15

I still have no idea what this product does.
Reactions: Asarien

Some are missing the point of this lamp, regarding HomeKit.

The interaction with the app seem minimal. Once set, pretty much in hand functions are the preferred choice. Speaking about innovation, well thought out.

Here's a similar looking lamp, with HomeKit support, and a good deal lower price, but no motion control: https://homekitnews.com/2018/12/28/mi-bedside-lamp-2-review/

A nicer alternative to this that has HomeKit support is...

I have one and it’s amazing! Cheap too! You can control it from the device itself.
L

2 points:
1. No HomeKit. Doh!
2. It's important to work with both sides of the sleep cycle: warm, soft light in the evening AND cool, bright light in the morning. Both are important parts of circadian rhythms.
Reactions: JonnyBlaze, skys15, chfilm and 1 other person

Yes, I would love this to be able to integrate with homekit. Also an important question is how bright it will be in the morning actually.
About homekit, sure it would be nice, but the biggest issue so far is that homekit doesnt support airplay. So this would only make sense to be integrated if it could be linked with playing a wake up playlist through airplay on a homepod for example. As long as that's not possible the whole usecase is a bit silly.
Reactions: skys15

Philips Hue Go is cheaper ($79), HomeKit compatible (when paired with Hue bridge), a bit brighter (300 lumens vs 280 lumens), can display millions of colors, and the app is far more flexible with new routines added all the time.

And if you prefer alternate styles, there are also Philips Hue Wellner and Philips Hue Wellness, both white ambience only, wired power only, much higher brightness (over 800 lumens vs. 300 lumens) and retailing at $99.
Last edited: Jan 29, 2019

Connects to your iPhone.
Looks exactly like a HomePod.

npmacuser5 said:
Some are missing the point of this lamp, regarding HomeKit.

The interaction with the app seem minimal. Once set, pretty much in hand functions are the preferred choice. Speaking about innovation, well bought out.

I think you are missing the point of HomeKit. It's not just being able to have voice control. I have a few buttons in my house, one by my bed, and one by the front door. These run automations to shut down the house (thermostat / lock doors / lights off / make sure garage is closed). Having components missed is a bummer. I like to be able to in one single button or event shut everything off in my house. Also, being able to check in one central location if things were left on is convenient. And any other automation you want to set. For instance turning the lights on when you walk in the bedroom.
Reactions: ZZ9pluralZalpha, juniormaj and nutmac

Looks cool but at $89 a pop and no Homekit. Sorry, I'll pass. Too expensive for what it is.
Reactions: skys15 and BigMcGuire

npmacuser5 said:
Some are missing the point of this lamp, regarding HomeKit.

The interaction with the app seem minimal. Once set, pretty much in hand functions are the preferred choice. Speaking about innovation, well bought out.

The biggest point of HomeKit is standardization. Using only HomeKit and nothing else, you can replicate much of Casper Glow functionality with any HomeKit switches/lamps with dimming bulb.

Granted, Glow is more than just a battery powered lamp. It has a nifty charging base and hand gestures for adjusting brightness.

But HomeKit would've meant it could be used without proprietary app and gestures. For instance, HomeKit would let it integrate with other devices (e.g., motion sensor, remote control), more advanced automation rules (e.g., turning on only when someone is home, turning on when smoke detector goes off, vacation mode), and yes, voice commands when you don't feel like reaching out to control the light.

At $89 and a design that is highly influential of HomePod, I think it's inexcusable for Glow to not support HomeKit.
Reactions: skys15

What I love about this is its compact form. (Less likely to be knocked over by me or the cat.) I want one!
N

That thing is dim. Only 280 Lumens max. Fixed on 2700K. And of course no HomeKit.
Reactions: ignatius345 and BigMcGuire
J

Stick a Hue (or similar) bulb in the lamp of your choice. You can go to a lamp store (remember those?) and choose from 100's of lamp designs. There are many ways to program the Hue bulbs for a harmonious wake up/sleep experience (using Phillips or third-party apps), if that floats your boat.

What were they thinking not supporting HomeKit?
Reactions: skys15

As a mattress company, I'm sure they tried to save some dollars on chips and not needing proper engineers to integrate HomeKit. But it's also 2019 outside, so this will be a definite pass for many.
Reactions: skys15

Several commenters here are claiming that the Glow lamp locked to a specific color temperature or only does going to sleep not wake up routines. The video seems to directly contradict this. Am I being mislead or are these posters rushing to post "first" before actually consuming the content from Casper?

I do like most things to be HomeKit and Alexa compatible but just like some people prefer the simplicity of switches a physical interface when I'm half asleep feels like it might be perfect. I hate shouting across the room, talking like a robot in sudo code, getting out my phone, or sometimes all three with increasing irritation just to get something slightly different than the pre programed timed routines that cover 80% of uses perfectly.