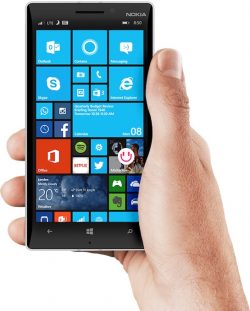 Microsoft has publicly admitted for the first time that its Windows Phone is dead. In a series of tweets, Windows 10 chief Joe Belfiore said that the company is no longer developing new features or hardware for Windows 10 Mobile, with only bug fixes and security updates to come for existing users.

Belfiore explained that his team had tried "very hard" to incentivize app developers by paying them and writing apps for them, but the low volume of users meant it was no longer worth the investment in Windows Phone.

Microsoft officially ended support for Windows Phone back in July, but the software giant never owned up to the fact that the move was essentially the final nail in the coffin for its flagship mobile platform. Today's news that the Windows 10 Mobile hardware is no longer a focus for the company now puts that beyond doubt, and makes the possibility of a long-rumored Surface-branded phone seem further away than ever.

Windows Phone was released in 2010 and quickly became the world's third most popular mobile operating system, but the platform couldn't compete with iOS and Android, which accounted for a combined 99.6 percent market share earlier this year.

In another sign of the times, the New York Police Department recently confirmed it will begin transitioning from Windows Phones to iPhones for its 36,000 police officers in the fall.

In Belfiore's series of tweets, the corporate VP also revealed that he had switched away from Windows Phone to a rival mobile operating system, but didn't say which one.

after being burned by supporting Windows Phone, and after moving to iOS en masse, institutions and companies should really look into adopting the Mac, which would make them save “up to $500 per machine” (source: IBM).

This is not really good, because we need competition to push the other companies to make better devices.
Reactions: ShaunAFC3, WolfRedfield, 341328 and 9 others
Comment

Windows Phone was never really competition for the iPhone, the two big players are IOS and Android, i think it will be this way for a long time to come.
Reactions: ShaunAFC3, Cape Dave, Cameroncafe10a and 16 others
Comment

There are plenty of manufacturers in the mobile space to push the envelope. Apple v. Samsung is what is driving development.
Reactions: ShaunAFC3, R3k, macTW and 2 others
Comment
I

It was never really alive in the first place.
Reactions: ShaunAFC3, Cape Dave, Cameroncafe10a and 9 others
Comment

As has happened before, Microsoft just couldn’t see the future.

Another iPhone-killer bites the dust.

I am beginning to see a trend here.
Reactions: ShaunAFC3, cbaca51, Cameroncafe10a and 3 others
Comment

Bill Gates has the audascity to say he uses an android phone.
Reactions: ShaunAFC3
Comment

I am beginning to see a trend here.
Click to expand...

Every time these companies come out with what they call an "iPhone killer" i roll my eyes, simply because it hasn't happened yet and is unlikely to happen.
Reactions: ShaunAFC3, cbaca51, BvizioN and 2 others
Comment

In other news, scientists have discovered that rain is wet.

Seriously, tell us something we already didn't know. The platform had promise, when it was windows CE and they delayed and revamped things so much that they blew it.
Reactions: ShaunAFC3, Cameroncafe10a, Insleep and 5 others
Comment
M

Can you truly kill that which was never truly alive?

Seriously, though, did anybody actually believe that Win Phone wasn't stone dead a long time ago? That would take a special kind of blind optimism.

I realize Windows Phone managed to hit double-digit marketshare in a few eastern-bloc countries, but the whole affair was basically the Kin times ten with a slightly less embarrassing flameout.

JosephAW said:
Bill Gates has the audascity to say he uses an android phone.
Click to expand...

Would you expect him to admit that he uses an iPhone?
Reactions: ShaunAFC3, WolfRedfield and JosephAW
Comment
N

JosephAW said:
Bill Gates has the audascity to say he uses an android phone.
Click to expand...

He also said he would never have an Apple product in his house or let us children use them.
Reactions: ShaunAFC3, JosephAW, macsplusmacs and 1 other person
Comment

Another one to the pile of failed Microsoft products.

At least they’ve still got XBox.
Reactions: ShaunAFC3
Comment
B

WP/WM had some traction here in Europe and I’ve seen plenty of people with them. Alas they were only really selling as £60/£60 replacements for dumb phones on PAYG (pre-paid) plans. In the main the people that bought them weren’t looking for apps, and if they were, were never going to spend enough money collectively either on the apps themselves or subscriptions/in app purchases.

The interface always seemed quite nice but throwing all of their WP7 under a bus for WP8, then repeating the same trick for WP8/WP8.1 for WM10 didn’t endear them to anyone who had bought into the ecosystem over and above dumbphone replacement features.

As a very serious Office 365 user (barring email), the iOS Office, OneNote and OneDrive apps work very well on iOS. Microsoft made the right move in disconnecting Office from Windows the way they did, otherwise Office’s market share would have plunged as it was tied down exclusively to WIndows desktop.

Even as Microsoft made third place in mobile, they were in third place whilst iOS and Android were three or four laps of the course ahead. Even if they’d executed perfectly and not thrown users & devices under buses, its by no means assured they’d still be in contention against the two leaders. Killing WP/WM is for the best at this point. No point in throwing good money after bad in the pursuit of the uncatchable.
Reactions: ShaunAFC3 and Wackery
Comment

jayducharme said:
As has happened before, Microsoft just couldn’t see the future.

to be fair, that comment was made pre-subsidized and so he did have a point, but Apple was astute enough to change the business model and the phones took off.
Reactions: rjohnstone, kdarling and 69Mustang
Comment

I think the Windows Phone being dead is why we are seeing Google doing their own phone now. They could not do it until Microsoft was not a competitor as the Android OEMs might consider going Windows instead of Android.

Dave245 said:
Every time these companies come out with what they call an "iPhone killer" i roll my eyes, simply because it hasn't happened yet and is unlikely to happen.
Click to expand...

Remind me again. Which company said they had an iPhone killer?
Reactions: ShaunAFC3 and Tinkernaught
Comment

Just won a $5000 bet with a HARDCORE Windows Phone supporter on another forum. He claimed for years that it would beat out Android and iOS. Would tout adoption numbers, not willing to recognize that their high of about 4% was based on high adoption rates in places like Micronesia where it doesn't matter.
Reactions: ShaunAFC3, Wackery and jacksmith21006
Comment
R

I actually like the live tile based user interface on Windows 10 mobile. It makes sense on mobile devices. It was also the only truly visually accessible interface, you can really scale the text up really large, great for low vision or elderly users. It's a real shame as I found it to be a solid mobile OS, Edge browser is fast, that I'd prefer over Android as the Win 10 phones went for quite cheap that is if I didn't have an iPhone.
Reactions: RuralJuror, Cameroncafe10a, jecowa and 4 others
Comment

There are plenty of manufacturers in the mobile space to push the envelope. Apple v. Samsung is what is driving development.
Click to expand...

Would actually see Google pushing things against Apple more than Samsung. The new features are going to be AI and Google being the leader in AI will push Apple which is a good thing.

Watch the Google show last week and it was all about AI. They showed some AirPod rip off headphone that were doing basically real-time language translation on stage. It was probably the most futuristic thing I have seen in a very long time.

Google WiFi is already the most popular router sold on Amazon and is an intelligent network and that is something that will push Apple to improve the AirPort line more than anything from Samsung, IMO.
Reactions: RuralJuror
Comment

They should officially commemorate this passing with pallbearers and a coffin.
Reactions: ErikGrim, Cameroncafe10a, ssspinball and 3 others
Comment

djcerla said:
after being burned by supporting Windows Phone, and after moving to iOS en masse, institutions and companies should really look into adopting the Mac, which would make them save “up to $500 per machine” (source: IBM).

They should, and they will (slowly).
Click to expand...

This would be a recommendation by IBM who's consultants for years recommended companies adopt a 'work from home" policy and then recently canceled the policy for their own employees and told them to come work in an office or quit? Apple could care less about the Mac or they'd already have gone after the enterprise business. Their failures with Windows Phone will hopefully cause them to come back with something disruptive to change the playing field, particularly for business use.


radus said:
This is not really good, because we need competition to push the other companies to make better devices.
Click to expand...

So true... and a two-opoly can get just as lazy as a monopoly. And right now the majority of smartphones are sold by Apple and Samsung.


iKrivetko said:
It was never really alive in the first place.
Click to expand...

A little history lesson... Microsoft was big in the smartphone business before Apple ever thought about making a smartphone. Poor leadership and lack of market vision allowed Apple and Google to take it from them. The big players were Microsoft (Windows CE -> Pocket PC -> Windows Mobile), Palm, Symbian, and RIM (Blackberry). What killed them was the notion of the App Store, not the iPhone itself. The iPhone brought nothing new, but the prospect of cheap and free apps by the thousands cause the developers to abandon their traditional space and/or get steamrolled by new developers.
Reactions: ct2k7, Delgibbons, chris722 and 5 others
Comment
You must log in or register to reply here.
Share:
Facebook Twitter Reddit Email Share Link
Register on MacRumors! This sidebar will go away, and you'll see fewer ads.
Sign Up
Top Bottom