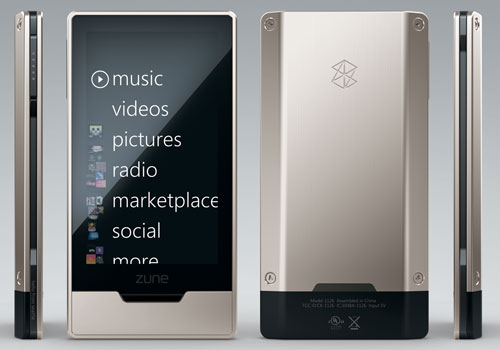 Microsoft may be trying to draw iPhone and iPod touch developers away to develop apps for the Zune platform. Daring Fireball's John Gruber describes an e-mail he received from an iPhone developer in response to a previous article from Gruber on the Zune HD outlining how Microsoft had offered the developer "a bucket of money" to port his Twitter app to the Zune.

After my post, I got an email from the developer of an iPhone Twitter client. He was contacted by Microsoft a few months ago, with an offer to port his app to the Zune in exchange for "a bucket of money". He turned them down, but assumes, as I do, that Microsoft reached out to the developers of multiple popular iPhone apps.

My source is certain the offer was for the Zune, but because he turned it down early on, he doesn't know the details regarding the OS or SDK. If any other iPhone developers have gotten a similar pitch from Microsoft, I'd love to hear about it.
Click to expand...

Officially announced in May, the Zune HD is set to be released on September 15th. It will feature a 3.3-inch OLED touchscreen with multi-touch capability, an integrated HD radio receiver, Wi-Fi, and it will be capable of putting out HD video to a connected HDTV. Coming with either 16 GB or 32 GB of internal storage, the Zune HD will also have a web browser and is poised to compete directly with Apple's iPod touch. The Zune HD, however, will likely be at a distinct disadvantage relative to the iPod touch given the vast offerings of Apple's App Store that increase the iPod touch's functionality well beyond those of standard digital media players.

Why turn down a "bucket of money" so quickly? Not even getting the details first?
Comment

MacRumors said:
John Gruber describes an e-mail he received from an iPhone developer in response to a previous article from Gruber on the Zune HD outlining how Microsoft had offered the developer "a bucket of money" to port his Twitter app to the Zune.
Click to expand...

Hey, Microsoft, if you want to pre-pay me to write apps for the Zune, I'll do it. Do I still get 70% of the sales proceeds for the app as well?
Comment
S

Definately think that Microsoft needs to get their foot into the market but they better come out with a cell phone version as well if they are really looking to compete with the touch and iPhone.

When they have 40 million users we can talk.
Comment
G

LOL! Microsoft has to pay developers for porting apps to their platform. Not that there's anything wrong with that, but it's just like the laptop hunters ads.
Comment

Glad to hear that the price wars (well, that and falling flash memory prices) has pushed Apple to hopefully drop their prices on the iPod Touch. Personally, all I look for is storage capacity, and if and when the iPod classic is put out to pasture, I really hope that the high capacity Touch's will be affordable, which the trend appears to support.

Judging off how easily M$ hands out money for legal issues, I would think one would have to be the highest level of RETARDED to flat out turn down an offer with "buckets of money" involved (without at least getting details)...
Comment

Why are MS designs always stuck in the 80s??

That angular design was so military and low rent at the time, and these days it looks like a device that will be highly pixilated and annoying like the tech of the 80s.

Good luck to MS. Money won't buy you love, guys. They should try to enthuse creativity a little, to get the best out of people.
Comment

I hope this app store takes off, if only to provide the iTunes store with some competition.
Comment

I think the design is actually quite good, *looks* durable.
Comment

That looks like my old Pocket PC. It's not a pretty thing... And why is More cut off?
And have they even considered selling it outside of America yet?
Comment

I actually like the way the Zune looks. Hopefully they can gain enough market share to make Apple work for it. I kind of doubt it, though. Apple owns this space and without a compelling new feature there's no reason for people to switch. Problem is, peoe already expect it to just work, which mp3 players should have done from the beginning but didn't. Microsoft has a reputation, whether still deserved or not, for not just working. They've got to do more than that.
Comment

That's a lost opportunity for the app developer (assuming this really happened).

Leaves the door open for someone else to create a similar app.
If this app store gets linked together with their Mobile OS through Nokia, as well as XBL, I could see it taking off big time.
Comment
S

spazzcat said:
When they have 4 users we can talk.
Click to expand...

fixed that for ya.

I call BS on this

Sure it is possible that Microsoft could do this, but for this particular story, if you wrote an App, you would be proud to port it any other platform, regardless of any rivalry between Apple and Microsoft, especially if you were enticed with a "bucket of money".

Robbadore64 said:
Why turn down a "bucket of money" so quickly? Not even getting the details first?
Click to expand...

Some people have principles?

I think I'll make an app just so that I can be contacted by Microsoft and turn them down.
Comment

You rarely get money for nothing. What did Microsoft want in return?

* Microsoft owns the app once its done?
* The iPhone version is not allowed to be updated after the Zune version comes out?
* You have to write and support Windows software to work with your Zune software?

I have no idea, but there had to be some kind of catch that this guy just didn't think was worth it.
Comment
G

FakeWozniak said:
Sure it is possible that Microsoft could do this, but for this particular story, if you wrote an App, you would be proud to port it any other platform, regardless of any rivalry between Apple and Microsoft, especially if you were enticed with a "bucket of money".

This should have been page 2, IMHO.
Click to expand...

Haha honestly. Is this app developer filthy rich or something? Who turns down a job in this ****** economy that promises "buckets of money"?

...but I won't be buying one of them. Hopefully Apple examines the product closely and grabs a few good ideas here - like HD radio for example.
Comment
P

I would like apple to put in a radio function as well though. I guess the only reason they're not doing it is because radio can hurt the iTunes Store profit.
Comment

And if you knew how the Zune interface worked, you'd know why "marketplace" and "more" are cut-off. Think magnification on the Mac OS X dock. But of course, the menu is longer than the screen allows. In the end it looks better than the simple scroll items of a standard iPod interface.

The more the merrier, I think. Why are people rooting for a monopoly? Apple already controls too much of the MP3 and smartphone market. Too many accessories/apps that we can convince ourselves that we "need." Wouldn't you rather have the choice? If you ever decided to switch to the Zune or a Windows Mobile handset, it would be nice having all the same or very similar apps when you do, wouldn't it?

Every smart company picks out some leading apps

It's actually pretty smart for any company to pick out the apps they're most interested in, and pay those developers to port them and/or give them extra help.

Apple did the same thing.

It's just a normal jump-start thing to do. Everyone does it.
Comment

The best thing about Zune HD is that it is designed as a video device. It has a proper widescreen display (16:9, unlike iPhone/iPod touch which use an aspect ratio that no video content producer has ever considered using for output) and supports HD video output to a TV.
Comment
You must log in or register to reply here.
Share:
Facebook Twitter Reddit Email Share Link
Register on MacRumors! This sidebar will go away, and you'll see fewer ads.
Sign Up
Top Bottom