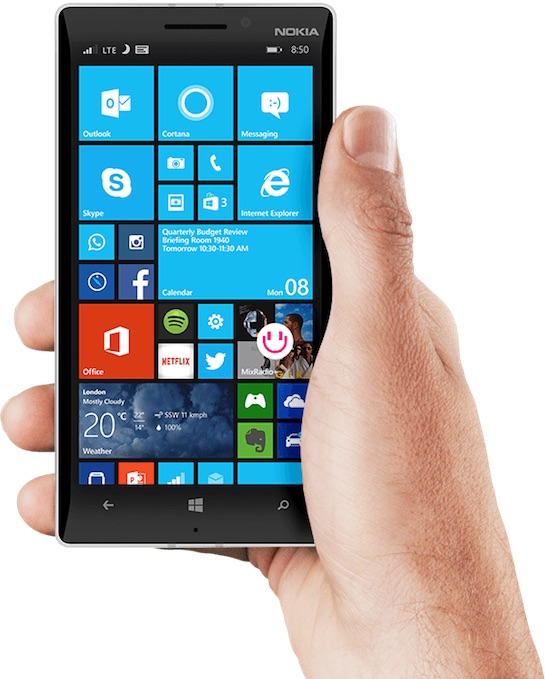 Microsoft released Windows Phone in 2010 and, within three years, it became the world's third most popular mobile operating system. But the platform simply couldn't compete with the likes of Apple and Google and, as of earlier this year, iOS and Android accounted for a combined 99.6% market share.

Microsoft continues to sell a limited number of mostly budget smartphones running its newer Windows 10 Mobile operating system, but the platform has only received minor updates in recent months as the Redmond-based company has shifted its focus towards the "intelligent cloud and intelligent edge."

Microsoft has stopped manufacturing its own Lumia-branded smartphones and, according to The Verge, rumors suggest the company will simply maintain Windows 10 Mobile until support for the platform ends in 2018.

Ultimately, Windows Phone is another casualty of the iPhone, and later Android smartphones, which completely upended the mobile phone industry a decade ago. Just ask BlackBerry, Nokia, or Palm.

Article Link: Microsoft Ends Support for 'Windows Phone' After Years of Battling to Compete With iPhone and Android

The Windows Phone never actually completed against the iPhone in my opinion. Take into consideration it lacked applications and proper marketing ultimately hurt it.
Last edited: Jul 11, 2017
Reactions: dan110, Rookbird, ILikeAllOS and 6 others
Comment

Windows Phone was a pathetic attempt at a mobile OS to be fair...
Reactions: ILikeAllOS, eagle_man, itsjordieduh and 4 others
Comment

Great OS but no apps.
Reactions: dgr874, Digger148, TheFluffyDuck and 19 others
Comment

What a clickbaity article. Windows Phone 10 still exist and they haven't ended support on it. Regardless of how many users use it.
Reactions: Insleep, Digger148, sd70mac and 10 others
Comment

Wasn't there supposed to be a Surface phone in the wings?
Reactions: sd70mac and EBone12355
Comment
A

Then I suppose Apple ends support for "iPhone" after ending the support for older iOS versions.
Reactions: Digger148, aylk, Breezygirl and 2 others
Comment

AstroAtom said:
What a clickbaity article. Windows Phone 10 still exist and they haven't ended support on it. Regardless of how many users use it.
Click to expand...

Google it, Windows phone is no longer going to get updates rendering it dead..
Reactions: Opieap13
Comment

The headline is a little misleading.

Per that page, it kinda stinks that some of their most unique phones (I'm looking at you, Lumia 1020) are being left behind. The 1520 is still supported, however.
Reactions: Insleep, abubasim, aylk and 4 others
Comment
B

Wondering if this affects Windows 10 IoT, which runs on some phones (mostly enterprise/rugged), and basically looks just like Windows Phone.
Comment

CerebralX said:
Google it, Windows phone is no longer going to get updates rendering it dead..
Click to expand...

I feel they gave up a long time ago. They don't promote their phone at all
Reactions: ILikeAllOS, Wide opeN, Cameroncafe10a and 3 others
Comment
D

While I will keep buying iPhone, having large competitors to iPhone drives innovation and helps keep prices down.

When I picked one up at the Microsoft store I was lost and in 1 minute felt so dizzy looking at all those different sized colored squares. That's kinda what made it unusable to many. And they carried the same look on to the desktop that they had to jump a few numbers. Just horrible.
Reactions: dan110, jw2002, ILikeAllOS and 6 others
Comment

I love how you bolded Bing as if it meant anything. Also, If you go to the News tab like you do on Google, on the far right you see realtime news on the subject so they are both displaying up to date news.
Comment

donlab said:
Great OS but no apps.
Click to expand...

I'd argue that WP was actually a bad OS.

What people really wanted was a grid of apps. WP reached an astonishing 15% marketshare here in Italy because it offered the lowest priced phones in the midst of a very bad economic downturn. But those people soon regretted their purchases.
Reactions: Avieshek
Comment
M

This makes me wonder if someone will try to buy their mobile os.
Reactions: xDKP
Comment

I've used a Nokia running Windows Phone 8.1 some while ago. And while it is clearly limited compared to iOS and Android, I did like the fact that it's fairly easy to use. And that really matters to me, and many of those who bought any Windows Phone. For some reason I feel bad for Microsoft, that they failed to make Windows Phone mainstream. Obviously it's their own fault though. App support is a disaster for example. Even collaboration between Windows devices isn't anywhere near what Apple has achieved with its Continuity features (e.g. Handoff, Instant Hotspot, Universal Clipboard). Truly a shame. And I mean that. I kinda hoped Microsoft would be able to break through. And they've had the chance, if they did it right.

As for hardware, they're not doing bad at all I think. But clearly, their core focus should be on software. Windows mainly, because in my opinion they've done it right with Windows 10. Especially with the latest updates. I'm running it using BootCamp on my MacBook Pro, and I think it runs great!

And by the way, this comes from someone who uses Windows Server 2012 for his work (Jr. SysAdmin). So it's not like I have no idea what I'm talking about... right?
Reactions: sd70mac and xpxp2002
Comment

I thought that happened a while back... Oh well.
**Cues Queen's Another One Bites the Dust**
Reactions: sd70mac and -BigMac-
Comment

My wife did a beta test with the last version of it, and loved it. Mind you, she's a "We're not changing ANYTHING!" person, and was impressed.

That's too bad, as competition is the best way to have positive change.
Comment

This is the reason when people ask "why should consumers care about how much a company profits from their products?", I tell them that consumers should be very concerned with profits. Companies making little to nothing on their products are far more likely to abandon those products and leave you with an unsupported device.
Reactions: dan110, Keane16, sd70mac and 10 others
Comment
You must log in or register to reply here.
Share:
Facebook Twitter Reddit Email Share Link
Register on MacRumors! This sidebar will go away, and you'll see fewer ads.
Sign Up
Top Bottom