Microsoft today hosted a media event in New York City to introduce the Surface Pro 3, the company's next-generation tablet device. Billing the Surface Pro 3 as the culmination of a three-year effort to create a "tablet that can replace your laptop", Microsoft's Panos Panay highlighted a number of improvements over the previous generation, including a larger 12-inch display with 3:2 aspect ratio, thinner design, an improved stylus, and a full friction kickstand that gives users greater flexibility for adjusting viewing angles.

Pricing begins at $799 with pre-orders starting tomorrow and availability of select models coming on June 20 in the U.S. and Canada. Availability will expand with additional models and countries in August. 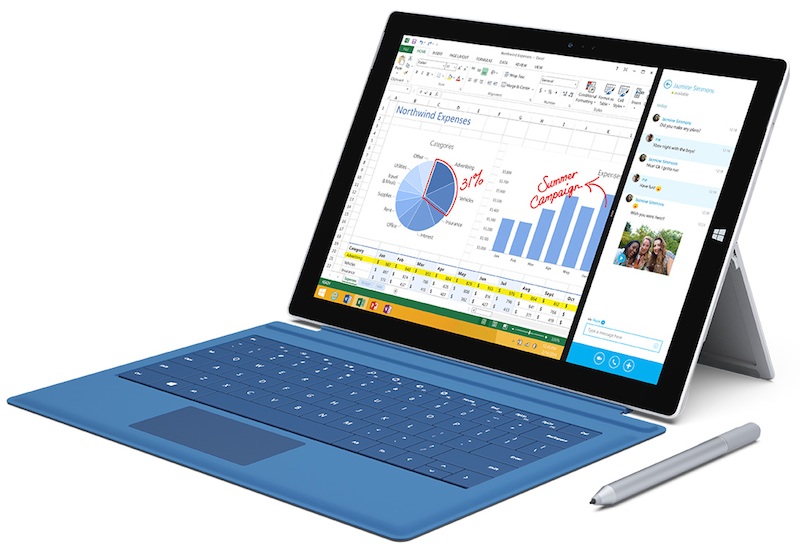 Based on Intel's Core i3, i5, or i7 processor, Surface Pro 3 measures 9.1 mm thick and weighs 800 grams, making it thinner and lighter than a MacBook Air, with Panay placing the two devices on a scientific balance scale to highlight the difference in weight.

The Surface Pro 3 also comes with a new Surface Pen stylus offering 256 levels of pressure sensitivity. During the presentation, Panay highlighted how the very thin optical stack of the Surface Pro 3 brings the content close to the surface of the tablet, allowing for greater precision with the stylus and which makes it appear as if ink is flowing directly from the pen tip. Integration with OneNote makes it easy to jot down notes on the Surface and have those notes uploaded to other devices, and the Surface Pen's button can be used to wake the tablet to take notes and then upload to the cloud when finished.

In support of its argument that the Surface Pro 3 can replace a notebook computer, Microsoft partnered with Adobe to show a preview of Photoshop optimized for the tablet device, with larger icons and support for both stylus and touch input.

Alongside the Surface Pro 3, Microsoft also introduced several new accessories, including a new $130 Type Cover that is thinner than its predecessor while offering a much larger trackpad. A $200 docking station converts the Surface Pro 3 into a desktop workstation, including Ethernet, Mini DisplayPort, USB, and audio ports.

LOL they still make those?

Why would they have not made pre-ordering available same day as announcement?

This will definitely sell well

I kind of agree. At first glance it has some attractive features.

When I saw the guy shilling this thing HUG IT on stage because its "personal" i could hear SJ laughing his ass off from beyond the grave.

Microsoft, BLESS THEIR HEARTS. They try so hard over there.

Billing the Surface Pro 3 as the culmination of a three-year effort to create a "tablet that can replace your laptop"
Click to expand...

I just wish the iPad had that stylus. Nothing third party vendors can offer compares to a really good integrated stylus for writing.
D

WOW! It has some features I wish my iPad Air had. (I watched the event)
Apple take note please.

Another future writedown for Microsoft.

They think they can keep making this faster and lighter. They attack the iPad as not being "productive" enough. But they don't get that people like the iPad. And they aren't making a product that competes with it.

It's not the hassle-free appliance that the iPad is. It's a vulnerable, breakable device just like desktop Windows.
M

Does this mean that they have abandoned Windows RT?
N

Before people say the iPad Air starts at $499, the S3 is not meant to compete with it. The S3 is basically a full fledged laptop in tablet form. It targets more of the MacBook Air. So, that's why its $799 and not a lot cheaper.

Thinner than a Macbook Air...

...with the keyboard cover included?

I have not been this excited for a product in some time.
T

The only downside, it runs on windows.

It just looks cheesy to me.

I take it you wouldn't buy a maxed out MBA?

Know this has been pointed out already, but I love this photo of the press from today's Microsoft event.