Microsoft Teams' Together Mode to Gain Support for Smaller Groups

Microsoft is working to allow smaller meetings to take place in its Together Mode, which uses artificial intelligence to put multiple users in the same virtual space. 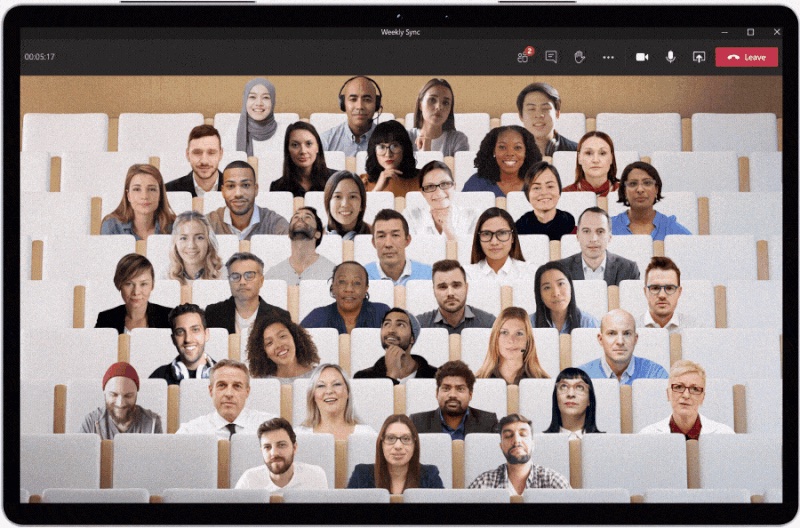 Launched last year during the peak of the global health crisis, Together Mode for meetings uses AI to place everyone on a call in a shared room-like environment, like a coffee shop or an auditorium, rather than the patchwork gallery view that typically comprises large Teams meetings.

The idea behind the feature is to better replicate real face-to-face meetings by taking people out of their home environments and custom backgrounds, thereby making it easier to pick up on facial expressions, body language, and other non-verbal cues.

Together Mode can accommodate up to 49 people at a time, and currently only becomes available when at least five people have joined the meeting. Soon, however, Microsoft is making it so that the feature can be used with just two people.


https://twitter.com/i/web/status/1410591387184242691
Support for smaller gatherings in Together Mode is currently limited to the developer Beta preview, but will soon be available for all. If you want to try accessing the preview, click the ellipsis next to your profile picture, select About, then tick Developer Preview. If the option doesn't appear, it may be because of the way your work account is set up.

MacRumors said:
Together Mode for meetings uses AI to place everyone on a call in a shared room-like environment
Click to expand...

It crops the faces and puts them on a background.

I may be missing something, but that picture doesn't look very appealing. I get why might want that mode for a very large group, but for a small one? Why?
Reactions: marmiteturkey, JetLaw and peanuts_of_pathos

Wow.. I like it.. Together Mode.. I pretty sure Apple's FaceTime Team is working hard to add in more features like this in the near future updates
Reactions: TropN and orbital~debris
G

That first image is creepy as hell
Reactions: Nermal, Dudebro101, TheWatchfulOne and 12 others
P

My immediate reaction is to wonder why all the seats are pale grey?

At least three members seem to disappear against that colour of background - at least, their clothing does. (But not in the naked sense. )

We keep getting told how many colours there are (whether 16.8 million or billions!) so can't be a shortage of colours.

Should the seat colours be consistent (at least, within a company)? Each person assigned the same colour in every meeting.

Should seat colours be allowed to represent something - imagine political party in a debate, or department within a company - or is that a step too far?

I don't know - but the all-the-same that is shown is not appealing.
Reactions: peanuts_of_pathos
O

It looks like the muppets.
9 or 1+8 Continuous presence (tic tac toe, if needed one larger square for speaker) is much more normal feel conference. Showing each person in their space at their desk, normal. If too many are in the conf go with voice switched continuous presence. The last speakers fill the squares.
go with Lecture mode to put one person unswitchably into a big pane until lecture mode off. Listeners see that person only, lecturer gets tic tac toe.

If too unruly have an operator run the conf moving panes manually, switching between modes and layouts.

that is industry norm, tried and tested. The muppets view not so much.
Reactions: peanuts_of_pathos and orbital~debris
L

MSFT Teams is a horrific product. While this feature may appeal to some the lack of basic features and stability, especially on a Mac is pathetic.
Reactions: iGMX, MacMediaNet, 123 and 8 others

In terms of features and stability, Teams seems to work quite well on my Mac.

It's… some of the UI decisions that get me. It really feels like a web app (because it basically is), and like few of its developers understand all the nice things you can do with a GUI app.

Just off the top of my head:

Still, it's frustrating. A decade and a half, Adium wasn't great at file transfer and didn't do video calls or screen sharing. But its usability, customization and just joy of using it were vastly superior.
Reactions: iGMX, ssspinball, michaelnugent and 4 others

I would have liked the news article to read

GigabitEthernet said:
That first image is creepy as hell
Click to expand...

Creepy would be if it records people before the meeting when they are changing and then displays that content when you join the meeting vs the live content.
G

Pity they can't concentrate on getting the thing to work properly on a Mac. like with multiple monitors, using the notifications system, restarts.

But most of all being reliable.

My biggest issue with Teams are the custom notifications for calls. They are hidden under the standard MacOS notifications. A nightmare.
Reactions: SoundJudgment and peanuts_of_pathos

sappo said:
My biggest issue with Teams are the custom notifications for calls. They are hidden under the standard MacOS notifications. A nightmare.
Click to expand...

They're fixing that one. I'm on a preview where you can opt in to macOS notifications. (Hopefully, this will eventually be the default.)
Reactions: peanuts_of_pathos

Skype has a similar feature. We stumbled over this by accident a few weeks ago. Weird as hell...
Reactions: peanuts_of_pathos

There’s 12-18 of us and I use the Together mode. It’s not great but practical. It slowly encourages everyone to get better lighting set ups and decent cams.
Reactions: SoundJudgment

Teams is garbage, especially on a Mac. we’re only forced to use it because of work.
Reactions: ssspinball and SoundJudgment

Never had an issue on macOS. What issues are you facing? 'horrific product' is strong.
H

Together mode is terrible and weird. The stock/promo photo of the feature doesn’t show the typical use. Every time I’ve used the feature, different people are sitting at different angles/distances from their cameras, so the whole effect comes off as rather ill-proportioned and awkward.
Reactions: jovada, marmiteturkey, SoundJudgment and 2 others

GigabitEthernet said:
That first image is creepy as hell
Click to expand...

Microsoft does creepy really well, but it's missing that Steve Ballmer awfulness it used to have.
Reactions: ssspinball, SoundJudgment, peanuts_of_pathos and 1 other person

I haven't used Teams on a PC (blocked at work), but the Mac version seems like crap - like missing a lot of functionality that I would expect any of these apps to have. Is the Mac version crippled or is even the PC version trash?

Anyway, I'm assuming this won't be coming to the Mac version anyway . . . which makes me wonder why it's on MacRumors.

It makes sense if you don't think about it.
Reactions: peanuts_of_pathos

The Windows experience isn’t much better. It’s slower than dirt, crashes more often than it should and lacks basic features like being able to engage in maximized full screen sharing sessions where the presenter’s screen is all you see. It’s bloated, badly written hot garbage juice.
Reactions: ssspinball and SoundJudgment