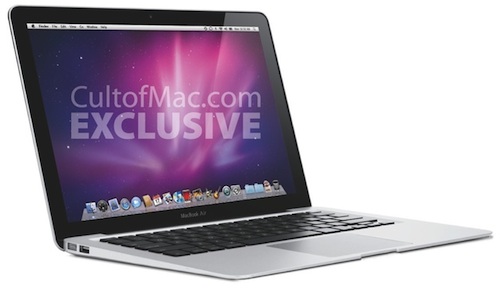 Cult of Mac's mockup of next-generation MacBook Air
Cult of Mac weighs in with claims from a new source regarding the new MacBook Air that has been receiving considerable attention in the days leading up to Apple's media event on Wednesday. The new report corroborates many of the claims coming from other sources, but also offers a few new details on what we might expect in the new machine.

- Battery life rumored to be 8-10 hours, up from 5 in the current MacBook Air.
- Thinner and lighter form factor with fewer curves.
- Two USB ports, SD card slot, straight-style MagSafe, Mini DisplayPort.
- Base model with 2 GB of RAM, but upgradeable. SSD also upgradeable.
- NVIDIA GeForce 320M graphics.
- Unconfirmed CPU claims of 2.1 GHz and 2.4 GHz options, but no claim of a specific processor family is offered.
- Suggestion of $999 for 11.6-inch model and $1100 for the 13.3-inch model, but Cult of Mac believes something like $1100/$1400 to be more likely.

And a black framed glass screen like the MBP. Looks nice. I bet what Jobs shows us on Wednesday looks different.
O

Looks pretty awesome! Having 2 different sizes will cater to a much larger audience, especially those which want a netbook-sized machine but without the slow cpus and poor quality that they provide. Looking forward to see what results!

Cairo, trapped in a pyramid with my iphone

So if this is true, what happens to the current 13inch Macbook pros? Price reductions?

So for all of you out there who have been waiting for a new Air for the past year+, is this what you wanted? Worth the wait?
T

So this is the new Macbook Pro.
X

It seems nice and believable.

My first thought when I saw this was 'door wedge.'

a matte option would be cool!
(sorry, I simply HAD to write that down )

Would love it, but I think they'll be more expensive.

Would absolutely have to get a model with 4 GB's of ram, which would add another $300 or move given Apple's mem prices.

Someone chopped the top of a 13" MBP and made it impossible to protect any hardware inside the palm rest after physical deformation.

It it's a nice PS job though.

Cairo, trapped in a pyramid with my iphone

Just one thing.... There is no way Steve Jobs would approve a WEDGE shape.

Mac21ND said:
Would love it, but I think they'll be more expensive.

Would absolutely have to get a model with 4 GB's of ram, which would add another $300 or move given Apple's mem prices.
Click to expand...

Not as much as it used to be. The 4GB upgrade on the MacBook is $100 extra, for example.

arcite said:
Just one thing.... There is no way Steve Jobs would approve a WEDGE shape.

People said similar things about the iPhone 4 when the prototypes were first leaked.
G

I know the last three MBAs took a lot of heat for having RAM directly on the motherboard... but I'd be pleasantly surprised if there were an option to upgrade the RAM in this new model. You'd think that would be a feature you'd have to sacrifice for the thinness.

How about integrated WWAN?
N

That is one sexy mock up. I'm currently playing with the idea of buying a new Apple laptop, but I'm not yet sure if I would use it enough to justify the cost since I've already bought a new iMac and iPad this year. But I am very interested in this new MacBook Air. Tons of speed isn't too important since I don't do any major video editing or 3D rendering. At most I would be running Corel Painter. What really is appealing about this rumored device is the near instant wake times, and the added speed of mundane taskes achieved through an SSD drive. But it needs to be large - at least 128GB. The portability and weight are also very appealing, as well as a near 10 hour battery life.

Looks like we'll see an affordable base model with a tiny SSD and 2GB ram. The more powerful models will cost a fortune!

To be honest though I would be buying this as a complete secondary computer. Ie. no music, videos, etc. on it. Just temporary documents and such. And of course extreme portability is a must. As well as low cost.

So in reality I should be shopping for a netbook.

It'll need a fugly plastic part poking through the exterior like the 3G iPad to allow the radio signal to be received by the antenna.

flopticalcube said:
Not as much as it used to be. The 4GB upgrade on the MacBook is $100 extra, for example.
Click to expand...

I think upgradable RAM would be a BTO option and would still be soldered on the motherboard rather than user replaceable sticks due to space contraints.