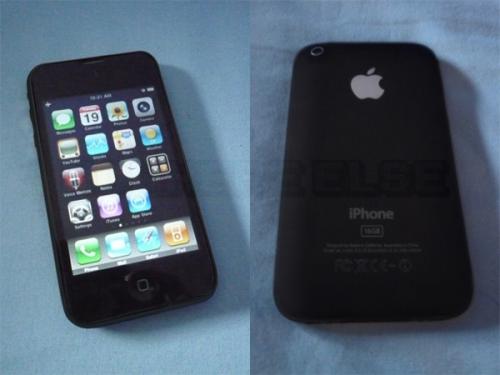 NoWhereElse.fr originally posted these images which are being mirrored by Engadget that claim to be photos of the next generation iPhone. The photos appear to depict a front-facing camera which has been on everyone's wishlist since the first iPhone came out.

Given the increasing reports that Apple will be pushing "video" as a killer feature of the new iPhone, it seems feasible that Apple could introduce video-chat. But, it's best to remind everyone that no even semi-credible source has actually suggested that the next iPhone will have a front facing camera. It's mostly been a common theme amongst these widely-circulated mockups. Some have even gone on to depict what making a video phone call might look like.

In our mind, the most credible photo of the next generation iPhone was the matte photos that leaked a number of months ago. Unfortunately, those did not reveal what the front of the iPhone casing would look like.

We will witness history at WWDC 09.

It looks the same as the current iPhone, besides the bezel... but a front facing camera? I'll take it in a heart beat.
B

My Treo 755 died 6 months ago and Sprint told me to screw off. Pre is slick but will fade fast.

Just saw a Nationwide commercial featuring their insurance car accident app. Nobody can touch what the iPhone is all about!

I cannot wait to get it!

I think the screen looks too washed out..
T

ohhhh it looks boring! after a year they just paint the bezel!
L

not a big deal. im still expecting for something else then just the same iPhone again.

If this is real, I'm liking the matte finish on the back, but I'm not digging the monochrome bezel. Looks cheaper than the current chrome bezel. I wouldn't mind seeing a brushed metal finish. The dark bezel looks too much like the iPod touch - where's the "premium" differentiation?

This looks exactly like the current iphone, they need to come up with something new.

It looks really sleek with the all black + matte finished back.
G

Things are heating up. I love it.
O

looking forward to it though I am unable to purchase this time round....
M

In A House, Ontario, Canada

This always happens -- a few days before the event a flood of pics come out claiming to be legit.

Lately though they've been pretty spot on.

I want something new, though. I hope they have a few interesting surprises for us.

Features aside - I care much more about stability. The current OS is too laggy for me to really love.
K

For the record, a front facing camera has never been anywhere near the top of my wish list.

Video chats seem cool in theory, but not nearly as practical in every day use. I'd really be curious to know how much iChat traffic falls into the "video chat" category (since that would be a good test of the practicality), and I've never seen a random person "in the wild" having a video chat conversation.

Maybe Apple can come up with some interesting uses for a front-facing camera beyond chat...

Doesn't matter what it looks like, people will still buy it.
N

I say real. It's consistant with other pictures and this close you have to expect something firm.

If you zoom to the top there certainly seems to be a round feature which could be a camera.
G

Like me. Should I be more picky, perhaps. Then again, they call it an addiction for a reason.

It looks as real as the Mac mini pictures we saw a few months ago. It is what you make of it.

The top ear piece looks photo shopped to me.

I wonder if the white iPhone will have a black bezel or a white bezel.

The angles of these two just seem too...similar to the previous images of the bezel and back.

Goona said:
This looks exactly like the current iphone, they need to come up with something new.
Click to expand...

I think the current look is great and doesn't need much of a aesthetic update; just enough to differentiate between generations. Matte back and black bezel is fine in my book. Of course, the repositioned earpiece helps too.