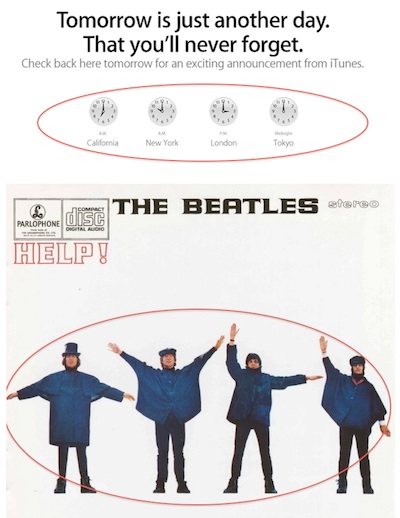 Graphic from TechCrunch
The big news of the day has been Apple's iTunes-related announcement scheduled for tomorrow, and one of the rumors that has been gaining traction in the hours since the news broke is that Apple may finally have struck a deal to bring The Beatles to the iTunes Store.

For starters, the sources in the past that quashed any rumors of an impending Beatles launch are today very quiet, and strangely so. Next is the wording of the teaser on Apple's website. The first line is, "Tomorrow is just another day." As noted earlier, "Another Day" is a Paul McCartney song released on his solo record "Ram," but written during the Beatles' "Let it Be" sessions.

Also, for those into hunting for more clues, Apple's teaser page features four clocks, each with the arms in different positions, (denoting the time of the announcement in California, New York, London and Tokyo time zones). Pretty unnecessary unless you compare it to the cover of the Beatles' "Help!" album, featuring all four members side by side with their arms also in different positions.
Click to expand...

The report from Billboard hints at other reasons may finally be the day that The Beatles come to iTunes, although it is unable to share all of its information.

The rumor of course leads some to question whether such an announcement would be worthy of a hype-filled front-page teaser on Apple.com, but there is no special media event accompanying tomorrow's announcement, and it is unclear if any other news besides The Beatles would be included if it is indeed in the works.

On one final note, MacRumors yesterday did receive an unconfirmed tip that The Beatles would be coming to the iTunes Store on Wednesday, November 17th. Such unconfirmed rumors are not uncommon (although things have been relatively quiet with regards to The Beatles since the lead-up to Apple's September 1st music-focused media event) and this one included no details we could use to follow-up or verify, but perhaps is worth noting in light of today's events.

Steve Jobs is nearing the end of his long and winding pursuit of the Beatles catalog.

Apple Inc. is preparing to announce that its iTunes Store will soon start carrying music by the Beatles, according to people familiar with the situation, a move that would fill in a glaring gap in the collection of the world's largest music retailer.

The deal resulted from talks that were taking place as recently as last week among executives of Apple, representatives of the Beatles and their record label, EMI Group Ltd., according to these people, who also warned that there is still a chance that Apple could change plans at the last minute.

Of course, because Apple would advertise one band (a popular band admittedly) coming to iTunes as a day to remember for the rest of your life. Right.

The clocks and their arms aren't in anyway comparable.

Has Apple ever done this before? I know that in the past they've generally themed their announcements around the product, but never actually putting hints...

why is this something we will never forget? i like the beatles but come on
L

That'll be a boring bummer if that's all this is. I mean, I dig the Beatles as much as the next guy, but come on...who really cares?

Where the bluebonnets bloom

I don't understand why this would be a big deal, at least from our perspective. Are there any Beatles fans out there that don't already have their entire collection?

Only one of them matches! I would be thrilled to see The Beatles on iTunes, but that image is quite a stretch.

That was my first thought as soon as I read the title too - it's got to be the beatles.

Here's hoping for The Beatles!
P

Funny...I could've sworn it was possible to get recordings of The Beatles from sources other than iTunes.

I fail to understand why anyone is excited about this. If you like The Beatles, you can get their music any number of different places.
T

You've got to be kidding that you are relating the clock hands to help.
There is as much correlation between those two images as saying that my computer died because of the sun because the sun was out the day that it died.
I

Apple prolly promised a front page ad in order to convince them to offer it with iTunes. It only makes sense.

If it was streaming music.. that would be a press conference to announce it. This is just a front page ad. It fits.

Who cares about the beetles on iTunes bs. Honesly those who are fans are have their songs on cd ripped into their computer and those who want beetles are not enough to warrant a special announcement!!! Jeez the artist have an overwhelming sense of importance.

The Who? Oh I guess that is a different Band

I think buying the remasters down-sampled to 256k is a mistake. Better to buy the CDs and rip them in ALAC.

I already have all the Beatles remastered albums from like 2 years ago.

Call me blind but their hands actually do line up.

They aren't meant to be directly comparable to each other; only that the 4 clocks equal the four band members, and the hands of the clocks are in different positions as are the arms of the band members.
R

surely if your a beatles fan you'd already own various cd's by them, which in most likelyhood are already burn't onto their itunes, so would they really be expecting this to be a big seller?

vCast is replacing iTunes. It's part of the deal with the devil (Verizon).

I really hope it's something more exciting than the Beatles catalog coming to iTunes. I love their music as much as the next guy, but it seems to me that anyone who wanted it on their iPod would've gotten it some other way by now, either by ripping the CDs, or by some other means. As evidenced by many of the comments on the various stories today suggesting this might happen, it's not really all that exciting.
C