Apple today released Music Memos, an all-new iPhone and iPad app that is essentially an enhanced version of the stock Voice Memos app for songwriters.

Music Memos is designed for musicians and songwriters to quickly and easily capture their impromptu song ideas on the fly, whenever inspiration strikes.

The app has a simple user interface at first glance, with nothing but a small recording button, but tucked away behind tiny icons are several useful features. 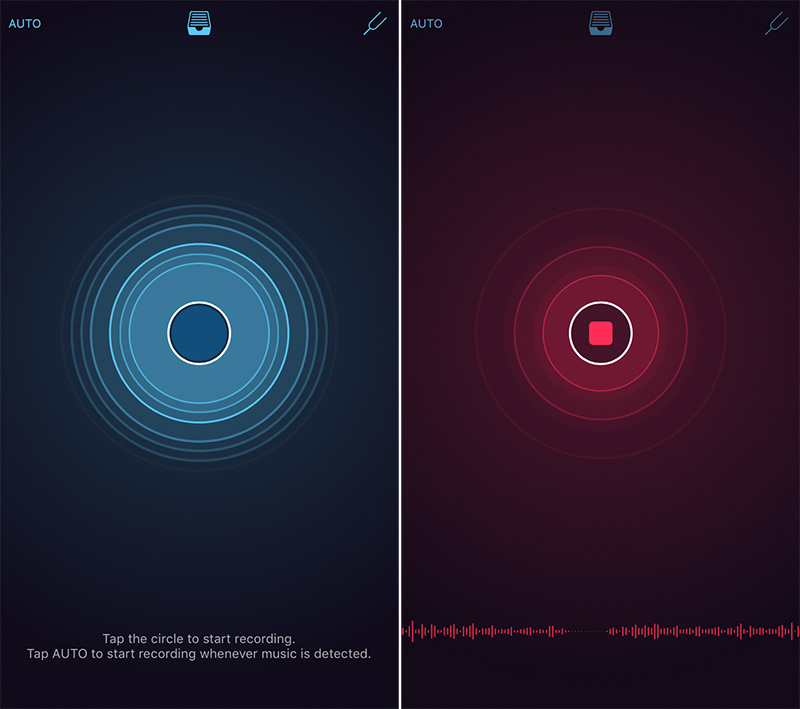 To begin recording, simply open the Music Memos app and tap on the blue circle button. The user interface will turn red while recording. Alternatively, you can tap on the "Auto" label in the top-left corner and the app will automatically start and stop the recording based on your voice.

As you are recording, the circle will pulsate to your voice, or musical instruments, and there is a waveform at the bottom of the screen. To finish recording, simply tap the red circle button and the snippet will appear at the bottom with a title, playback button, pitch notation, and other options. 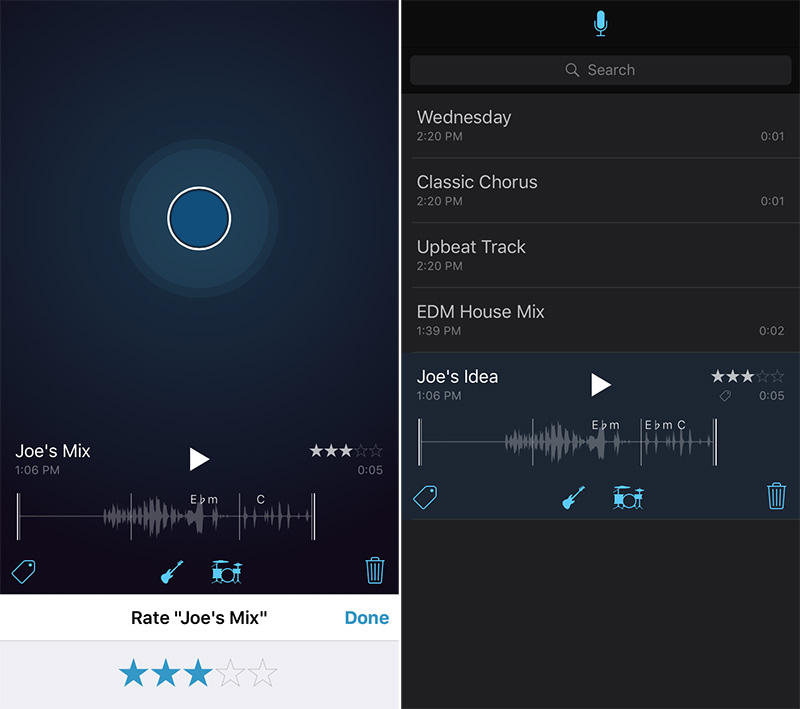 Tapping on the guitar or drum set icons overlays the music recording with drums and a bass line to provide a virtual, customizable backing band. Moreover, your snippet can be renamed, deleted, tagged, or rated on a five-star scale. The app also provides visual warnings if it detects your recording is too quiet or too loud.

Music Memos saves a list of your recordings, accessible by tapping the tray button at the top of the app. Tapping on a snippet's waveform brings up various editing options for tempo, time signature, downbeat, tuning and length.

The app automatically analyzes your recording and displays musical measures and suggested chord names. Any chord names throughout your song can be renamed or provided further detail by tapping on them.

There are also the options to trim the beginning and end of your recording, adjust the tempo, time signature and downbeat, and keep track of comments, lyric ideas, alternate guitar tunings, or capo position. 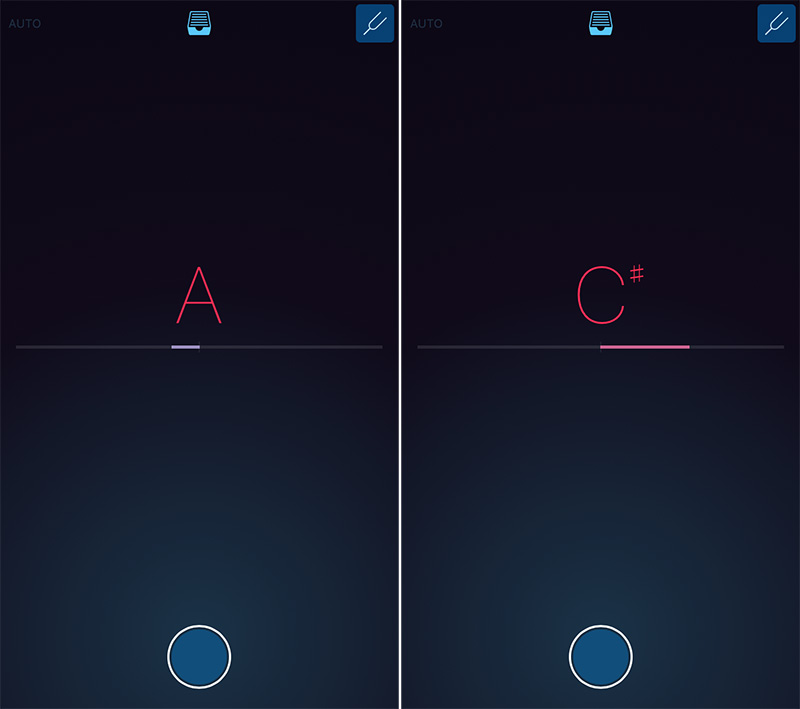 Music Memos includes a built-in tuner for chromatic pitch notation, accessible by tapping the tuning fork button in the top-right corner. The tuner automatically shows a letter note once it detects sound.

There are already several existing tuner apps on the App Store, including Guitar Tuna and Cleartune, but this is a convenient, all-in-one option that songwriters can use to both record musical ideas and tune their guitars. 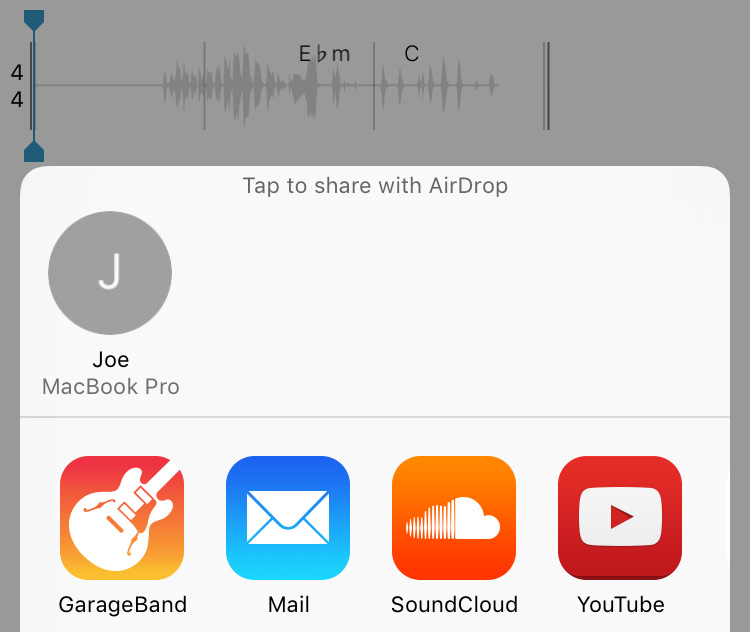 Music Memos snippets, which are 24-bit 44.1kHz audio files, can be saved to iCloud Drive, exported to Logic Pro X and GarageBand for iOS or Mac, or shared directly on Apple Music Connect, SoundCloud, and YouTube. Simply tap on the tray button at the top, expand a recording from the list and tap the share button.

Music Memos is free on the App Store for iPhone, iPad, and iPod touch.

Do Rey Me Far So La Tee Do!
Reactions: naeS1Sean

What a great concept from Apple.

And the app icon is gorgeous.
Reactions: Keane16, docziandras, tyasjs and 6 others

Hoping someone will find a way to convert old Voice Memos to drop into iCloud and load up in this new app.
Reactions: lewismayell, rhoydotp, Keane16 and 2 others
I

"This app will be integrated into iOS 10 and cannot be deleted. You're welcome." - Apple 2016
Reactions: lewismayell, Lazy, RoelJuun and 9 others
B

Nice app. Now let's hope that Apple doesn't kick all the other tuner/metronome apps out of the App Store when iOS 10 arrives just because they would then duplicate built-in functionality.
Reactions: lewismayell, kironin, g75d3 and 1 other person

Does this replace the existing voice memo app? I think I prefer it, and since it does the base functions, I don't need the redundancy.
Reactions: TimSHB and purplehaze0
C

As someone who's recorded a lot of piano into voice memos this could be incredibly useful. I just gave it a go and it stumbles a lot matching the tempo and bar placement if there isn't a definitive start and end to a bar but let's give it time
Reactions: chuloo

iLunar said:
What a great concept from Apple.
Click to expand...

Except Hum has been in the AppStore for quite some time. http://justhum.com

trainwrecka said:
Except Hum has been in the AppStore for quite some time.
Click to expand...

Except that video seems to indicate the two products are quite different. Automatic key and time signature detection, uncompressed audio, and automated accompaniment mean Music Memos goes well beyond the more basic premise of Hum.
Reactions: LizKat, DeepIn2U, jahwriter and 3 others

trainwrecka said:
Except Hum has been in the AppStore for quite some time. http://justhum.com

Exactly. That's my go to app.
Reactions: trainwrecka
A

Wow, this looks amazing. This is all I use voice memos for anyway.
Reactions: ms.mousette, Keane16, jahwriter and 4 others

trainwrecka said:
Except Hum has been in the AppStore for quite some time. http://justhum.com

Fair enough, Hum looks amazing as well. Apple's providing a free alternative, though. I'm also a bit shocked to see how many music creation apps there are in the App store, it's been a while since I've looked.

I'm sure the people at Hum, etc, aren't too thrilled.
Reactions: DeepIn2U and trainwrecka

iLunar said:
What a great concept from Apple.

And the app icon is gorgeous.
Click to expand...

Not possible. Anything post iOS 7 is complete garbage. /s
Reactions: zsbradt, techguy9, rdlink and 2 others
B

Not catering the Pros my *ss.
Reactions: milo
S

Does anyone know if it can save audio to a .wav file?
G

All right, that's pretty cool. I'll for sure give that a shot.
Reactions: LizKat and tyasjs
6

bompf said:
Not catering the Pros my *ss.
Click to expand...

Pros would use a better ADC than what's available on an iPhone.
D

Thankfully it’s not another stock app that I can’t delete.
Reactions: Benjamin Frost and Avenged110

What a great concept to have one Average Joe oriented app and one aimed at professionals at the same time in two separate products.
Average Joe isn't "confused" by too many options and the professionals get most of the features needed in a product.

Now, to imagine they would not only use this concept for audio and video production, but also for photo editing, that'd be a brilliant idea, wouldn't it?
*cough*

acedout said:
Pros would use a better ADC than what's available on an iPhone.
Click to expand...

Yes, AC/DC are pros and really awesome since forever.

I've encountered a major glitch already - recorded a piece played on piano, played it back with drums and bass. Deleted the track and recorded another different one, tried to play it back but it had reverted to the first (deleted) piece. Only way I could get it to work properly was to exit and restart the app after deleting the first recording. Anyone else experiencing the same?
Reactions: Benjamin Frost
You must log in or register to reply here.
Share:
Facebook Twitter Reddit Email Share Link
Register on MacRumors! This sidebar will go away, and you'll see fewer ads.
Sign Up
Top Bottom