Here is a picture of the stylus/screen that was referenced on Mac OS Rumors's reader comment regarding the MacDirectory he received with his MWSF 2002 Badge.

now this looks like it could come from apple . . .

but i still think apple wouldn't make a mistake release of a photo so early . . . especially w/ all of this hype ?!?. .
A

Well...there may be a better chance that this is real...

but it sure isn't as sexy as that (fake?) iWalk.

If anything - it looks like an old Apple prototype/design 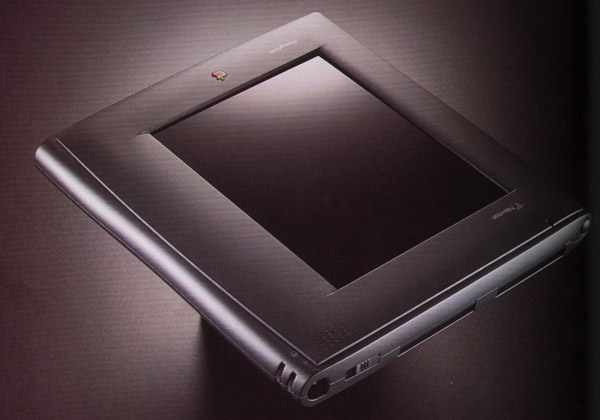 For example - this was an Apple Messageslate prototype...

Now THIS could be real

Now _THIS_ could be the real iPad/iWalk/iPoop

Looks like a Grayscale PDA, no color though. You'd think it'd be only available in color to take full advantage of Aqua.
M

have you seen how excited people get reading this stuff?
don't rule out the possibility that apple would release "a little bit" of something to hype-up the rumories(word?)
there's still a lot to be explained about the iwalk and i say that it's only half the excitement to know that a product will be released and half to know what it's capable of (find out at the expo)
and:
if a machead gets a hold of something like this and it is released at the expo, don't you think that machead will in the futre always be pouring over the web looking for just that kind of stuff before expos?

will I be proven wrong?

that does look a bit real.....but then again so do the stills on macspy.com....

it's all very exciting...

and I can't believe all this PDA stuff?!
P

It's from page 142 of the AppleDesign book (image 189, to be exact). The only thing is that they took off the rainbow apple logo (since Apple stopped using it...).

Hey look, it's the same image from the macworld one, only the apple rainbow was blackened out...

Get the book AppleDesign by Paul Kunkel, then people won't have to wet their pants over a 11 yo pda

Guys, take a closer look at the MOSR picture...

It's not the same as that prototype, first of all.

Third, it seems to have an attachment or some type of bulge at its top. At first, it looks like it's a flip down cover, BUT, if you look closely at the top of the image, you'll see a slight curve, which might indicate that it's the top of the device, like a battery holder or something.

If you'll note, there is also a slight shadow indentation near the top border of the screen, indicating that its top is slightly angled to the rest of the device.

None of the looks of this device seem to be in line with what Apple has been doing of late. A dollar says that this is an aborted Apple/palm prototype that was thrown into the MWSF 2002 badge brochure for fun.

Or else it's proof of the iPad.

Sorry Guys it's an oldie

Sorry guys, although I would love it te be an image of a new device, I'm afraid its an image of a Newton concept from 1990. If you've got the Apple Industrial Design book you can see it for yourself on Page 142.

Apple's current design tip is an industrial blend of metallics & clear polycarbonates, I would be very suprised if they had gone back to the old days of matt beige plastic. (although Windoze users still seem to like it, not that they have much choice)
C

Anang is right...nothing but old hardware...

FYI
I recognize this from one of my text books from last semester. This is a cropped picture for a reason. If you saw the rest of it, you'd know it was old. The text book was extremely outdated. I am not buying this one. old hardware.

I think we've got Columbo in the house!
T

If this is a valid picture...

The picture that was featured in the MacDirectory may serve to be nothing but a tease, a little something to get minds going. So we all know the picture looks old, in fact it does look like something out of the Apple Industrial Design book, for I have a copy myself. The point is that maybe Apple is trying to get people to think of the PDA, of course not showing the new device, but suggesting that they have reborn the old device that so many loved. Why else would Apple show a 10 year old prototype on a 2002 conference information piece? Just my two cents. May we all see for ouselves this Monday. Happy new year Mac zealots!

Eat your heart out Microsoft

Being a part of this Mac community is so much fun.

I mean, what other group can get so wound up over partial photo shots - looking up old design photos in books, getting thier hands on, or faking, not one but three video clips (iWalk video from SpyMac), etc.

Apple was right, people were so excited about LCD iMacs and 1+ GHz G4/5 rumors that the entire community missed the PDA/whatever device completely. (A handful of questionable photos discovered five days before the expo after a posting by the company that it is 'way beyond' what we were able to come up with does not constitute the Mac community besting Apple.)

Anyway, I just have to say that after taking a look at the iWalk videos, and these latest photo postings, I am impressed. if not in the real device, then in the quality of the fakery. No one ever gave so much thought to the XP interface, or even the Xbox controler design.
You must log in or register to reply here.
Share:
Facebook Twitter Reddit Email Link
Top Bottom