If all goes according to plan at around 1:30 am eastern time early Monday morning the Nasa rover Curiosity will safely touch down.

Hurtling ever closer to Mars, NASA's most high-tech interplanetary rover prepared for the riskiest part of its journey: diving through the Martian atmosphere and pulling off a new landing routine.

Nerves will be on overdrive Sunday night as the Curiosity rover attempts a dizzying "seven minutes of terror" routine that ends with it being lowered by cables inside a massive crater if all goes according to script.

Hours before the 10:31 p.m. PDT planned touchdown, Curiosity was in excellent health and speeding toward the top of Mars' thin atmosphere.
"We're having a very clean ride right now. It's a little spooky," said Allen Chen, an engineer at NASA's Jet Propulsion Laboratory, which manages the $2.5 billion mission.

Not ones to tempt fate, flight controllers planned to break out the "good luck" peanuts before Curiosity takes the plunge as part of a long-running tradition.
One scientist who can relate to the building anxiety is Cornell University planetary scientist Steve Squyres, who headed NASA's last successful rover mission in 2004.

This time around, Squyres has a supporting role and planned to view the landing with other researchers in the "science bullpen."

"Landing on Mars is always a nerve-racking thing. You're never going to get relaxed about something like landing a spacecraft on Mars," said Squyres.
Sunday's touchdown attempt was especially intense because NASA is testing a brand new landing technique. There's also extra pressure because budget woes have forced NASA to rejigger its Mars exploration roadmap.

"There's nothing in the pipeline" beyond the planned launch of a Mars orbiter in 2013, said former NASA Mars czar Scott Hubbard, who teaches at Stanford University.

Curiosity was launched to study whether the Martian environment ever had conditions suitable for microbial life.

The voyage took over eight months and spanned 352 million miles. The landing will be the trickiest part of the journey. Because Curiosity weighs nearly a ton, engineers drummed up a new and more controlled way to set the rover down.

The last Mars rovers, twins Spirit and Opportunity, were cocooned in air bags and bounced to a stop in 2004.

The plans for Curiosity called for a series of braking tricks, similar to those used by the space shuttle, and a supersonic parachute to slow it down. Next: Ditch the heat shield used for the fiery descent.

And in a new twist, engineers came up with a way to lower the rover by cable from a hovering rocket-powered backpack. At touchdown, the cords cut and the rocket stage crashes a distance away.

The nuclear-powered Curiosity, the size of a small car, is packed with scientific tools, cameras and a weather station. It sports a robotic arm with a power drill, a laser that can zap distant rocks, a chemistry lab to sniff for the chemical building blocks of life and a detector to measure dangerous radiation on the surface.

It also tracked radiation levels during the journey to help NASA better understand the risks astronauts could face on a future manned trip.
After several weeks of health checkups, the six-wheeled rover could take its first short drive and flex its robotic arm.

The landing site near Mars' equator was picked because there are signs of water everywhere, meeting one of the requirements for life as we know it. Inside Gale Crater is a 3-mile-high mountain, and images from space show the base appears rich in minerals that formed in the presence of water.
Click to expand...

I saw a video of the maneuvers it is supposed to make while landing......fricking sweet.

mobilehaathi said:
I saw a video of the maneuvers it is supposed to make while landing......fricking sweet.
Click to expand...

This will be the most advanced landing ever attempted and everything has to work in sequence or the whole mission will fail.

To watch the live feed:
http://www.ustream.tv/nasajpl

Thanks for that link! I'm so tempted to try to stay up and watch, after bumping into a piece about Scott Maxwell on CNN earlier today sometime: "His other car is on Mars"

I want it to succeed. But, I am fully prepared for it to fail and hearing the BS, congressional hearings, etc.

No kidding. I'm sure Congress will bitch and moan about the $2 billion they couldn't have spent on another useless F-35 Lightning.

LizKat said:
Thanks for that link! I'm so tempted to try to stay up and watch, after bumping into a piece about Scott Maxwell on CNN earlier today sometime: "His other car is on Mars"

They say it could be hours or more before they get a signal. Stay up all night? Naw... I'll check it in the morning. 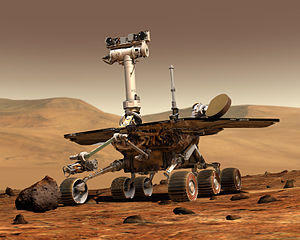 FAST FACTS
Mission name: Mars Science Laboratory
Rover name: Curiosity rover
Size: About the size of a car -- 10 feet long (not including the arm), 9 feet wide and 7 feet tall!
Weight: 900 kilograms (2,000 pounds)
Features: Geology lab, rocker-bogie suspension, rock-vaporizing laser and lots of cameras
Mission: To search areas of Mars for past or present conditions favorable for life, and conditions capable of preserving a record of life
Launch: Between Nov. 25–Dec. 18, 2011, from Cape Canaveral, Florida
Arrival: August 2012 at Mars
Length of mission on Mars: The prime mission will last one Mars year or about 23 Earth months.

Look at how many MacBook Pros there are in Mission Control!
Last edited: Aug 6, 2012

For those that want to watch live there are 2 streams.

The clean JPL feed from the control room, http://www.ustream.tv/NASAJPL2

So far so good... they keep talking about how the craft is sending its "heartbeat tones" as it approaches entry. I think my own heart rate is going up! 90 secs to entry..

Curiosity has landed! Due to 14 min delay, we are still waiting for confirmation!

Holy cow, it touched down! I'm so impressed. Way to go NASA!

Has it landed intact?

And sent back pictures.

I can't believe that sky crane worked without a hitch! Insanely complex system, I half expected us to impact a wad of plutonium into Martian soil.

NASA still got it!

Imagine what tech we'd have if we gave NASA a $500B annual budget.

Right? Imagine. Instead of a shoestring. Maybe we should let NASA, JPL and their global partners on this project run the country for awhile. They must have had some arguments along the way but they resolved enough differences to make a spec that apparently suited them as well as the laws of physics (as we currently understand them) and put a portable science lab on Mars up there that flippin' worked the first time. Totally mind boggling achievement.

NASA is already worth it's weight on platinum to me thanks to their technical reports server. Planetary exploration is just icing on my cake.

Can't wait for some white papers of this mission to show up on NTRS!

Look at how MacBook Pros there are in Mission Control!
Click to expand...

I could not agree more, most of them were shining apple icon lights.

I just watched the landing, so cool! I like that the Sky Crane was the 'least crazy idea' for landing the rover!

The best use the best, MacBook Pro FTW! I see an Apple advertisement in this, haha! Go NASA!

August 6, 2012: An image from the High Resolution Imaging Science Experiment (HiRISE) camera aboard NASA's Mars Reconnaissance orbiter captured the Curiosity rover still connected to its 51-foot-wide (almost 16 meter) parachute as it descended towards its landing site at Gale Crater.

Curiosity and its parachute are in the center of the white box; the inset image is a cutout of the rover stretched to avoid saturation.

"If HiRISE took the image one second before or one second after, we probably would be looking at an empty Martian landscape," said Sarah Milkovich, HiRISE investigation scientist at NASA's Jet Propulsion Laboratory in Pasadena, Calif. "When you consider that we have been working on this sequence since March and had to upload commands to the spacecraft about 72 hours prior to the image being taken, you begin to realize how challenging this picture was to obtain."

The image was taken while MRO was 211 miles (340 kilometers) away from the parachuting rover. Curiosity and its rocket-propelled backpack, contained within the conical-shaped back shell, had yet to be deployed. At the time, Curiosity was about two miles (three kilometers) above the Martian surface.
"Guess you could consider us the closest thing to paparazzi on Mars," said Milkovich. "We definitely caught NASA's newest celebrity in the act."