The latest data from Mixpanel shows that approximately 32.22% of active iPhone users still have a 4-inch screen. That is the same screen size as the so-called "iPhone 5se" that Apple is expected to announce at its rumored March 15 event.

Apple has released three iPhone models with 4-inch screens since 2013, including the iPhone 5, iPhone 5c, and iPhone 5s, and some customers still feel these smartphones have the best screen size for pocketability and one-handed usage. 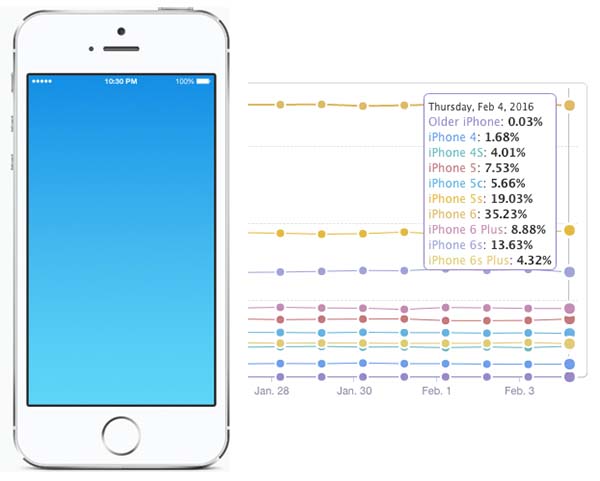 Apple's newest 4-inch smartphone, the iPhone 5s, represented just under 20 percent of current iPhones in use, trailed by the iPhone 5 at 7.53 percent and the plastic-backed iPhone 5c at 5.66 percent. The numbers fluctuate slightly in real time.

In the company's latest earnings call, Apple CEO Tim Cook said that 60 percent of older-generation iPhone users have yet to upgrade to the iPhone 6, iPhone 6 Plus, iPhone 6s, or iPhone 6s Plus.

Right now, customers that want a 4-inch iPhone have to settle for the over two-year-old iPhone 5s's outdated tech specs, and the smartphone also lacks many new features such as Apple Pay, 3D Touch, and Live Photos.

For that reason, the "iPhone 5se" with a rumored 4-inch screen, Apple's newest A9 chip, Live Photos, and purported price of around $500 may prove to be a more popular option among prospective iPhone buyers.

I still have my iPhone 5s, but not by choice. I should be using the 6s Plus by now.

I love my 6+ but I'm not at all against the smaller sizes.
Bring on a new 4" shiny!
Reactions: GrumpyMom, Benjamin Frost, driceman and 6 others

I think the new 4" Device going to kill 6s sales.

I still have my 5s but my wife likes the bigger one. lol
Reactions: achtung!, driceman and darkknight14

Not shocked by this if I'm honest
Reactions: AleXXXa, Sea Bass, Digger148 and 3 others

Anecdotal evidence doesn't mean much, but I know several people who still have an iPhone 4/4S or an iPhone 5S/C because the "iPhone 6 is too big." I certainly think there's a market for 4" devices, but Apple knows more than me.

Some people on this forum says that 4" is too big and want a 3.5" phone. I never felt the jump from 4S -> 5 was that massive.
Reactions: attila, Benjamin Frost, Sea Bass and 12 others
A

Traverse said:
Anecdotal evidence doesn't mean much, but I know several people who still have an iPhone 4/4S or an iPhone 5S/C because the "iPhone 6 is too big." I certainly think there's a market for 4" devices, but Apple knows more than me.

Another problem is that Apple made the bezel so big. Compared to another phone of same screen size, iPhone tends to be bigger due to the bezel. I like the "size" of the iPhone 5, but if they can do 4.7inch with smaller bezel, I'd take that.
Reactions: GrumpyMom, Benjamin Frost, disinfectant and 15 others

It's not, but somehow people in this community think fish are sharks.
Reactions: samden and rizzo41999
A

The iPhone is used by a wide variety of ages... I suspect that the older crowd, the ones who may not feel compelled to upgrade as often, are using the older phones with the smaller screens.

If Apple offered a iPhone 6s inwards into a 4" frame, I would get it in a heart-beat.
Reactions: GrumpyMom, SteveW928, Benjamin Frost and 12 others

I still like 4" the best. I have an iPhone 6 right now, and it's a little too big. It hardly fits in my pocket and is too large for me to handle easily. And I have normal-sized hands (for a man) and wear Kirkland-brand jeans... so I don't know what all those girls with small hands wearing skinny jeans with tiny pockets are doing.
Last edited: Feb 4, 2016
Reactions: Oldfash33, Benjamin Frost, Sea Bass and 3 others

I still use my iPhone 5 as well. My wife uses an iPhone 4S. They do all we need. Not sure what I could do with an iPhone 6? Force Touch it? Not worth the cost...
Reactions: Benjamin Frost, Substance90, BlandUsername and 1 other person

I prefer the size of the iPhone 5(S). I don't feel comfortable with a bigger sized phone.
Reactions: Benjamin Frost and radgar

aajeevlin said:
Another problem is that Apple made the bezel so big. Compared to another phone of same screen size, iPhone tends to be bigger due to the bezel. I like the "size" of the iPhone 5, but if they can do 4.7inch with smaller bezel, I'd take that.
Click to expand...

I'm not sure they want to give up the top and bottom symmetry and they need the bottom bezel for Touch ID, at least for now.
Reactions: Sea Bass and Rogifan

I'm still on a 5S and it suits me, for now. I'll seriously consider a 5se or whatever it is, if it eventuates. Otherwise I'll likely get a 6S when the 7 is released. I can't afford latest anymore.

Maybe the price is a reason lots of people still use 4" iPhones, Apple's iPhone 6(s)-(Plus) are just too expensive, I certainly will not buy a 6-6S nor a Plus even though I can easily afford them.
Last edited: Feb 4, 2016
Reactions: Benjamin Frost, AleXXXa, ackmondual and 4 others

I love larger screens but it all comes down to use and preference. I bought the 6 but returned it for the sole reason of how I personally use it. I'm on the go, I take it to the gym, hiking etc. I don't like carrying anything too bulky or unnecessary in my person. I hate carrying my wallet if I can do without it.
So for "me" the smaller phone works best. I have an iPad when I need a bigger screen.
Choice is good. We're all different.
Reactions: GrumpyMom, Oldfash33, Benjamin Frost and 6 others

Based on the purely anecdotal evidence of friends, family, co-workers that I've talked to, I would disagree. Many are clinging on as the 6/6S is perceived as too big for their hands. I think if Apple could get the 4.7 into a smaller frame, that might assuage some fears as well as make the device more pocketable and manageable in the hand. Who knows, I love the 5.5" screen of the Plus myself, but I think it could be more manageable with less bezel.
Reactions: DiceMoney and trifid

Once i switched to the plus I cant go back. 4.7 is good but the 5.5 is just awesome. Its great for being in bed when the 4.7 would be too small and the ipad would be too big.
Reactions: d656, iamPro, t1meless1nf1n1t and 3 others

iPhone 6 is too big for my hands and jean pockets. Please give us an iPhone 6s mini and not a watered down iPhone. I'd be willing to pay iPhone 6s money.
Reactions: GrumpyMom, Benjamin Frost, Sea Bass and 10 others

Not sure what we can read into this. For some people if their phone is good enough they may not see a need to upgrade. I'm highly skeptical 1/3 if the iPhone install base hasn't upgraded because the screen sizes are too big. Some yes. But not 1/3.
Reactions: AppleScruff1, tomjleeds, iamPro and 3 others
C

Have a 5s. Got a beautiful 6s as a gift.........hated it. Great working phone but couldn't stand fiddling around trying to get it out of my pocket every time (can't imagine lugging around a 6+) Happily went back to my smaller 5s I don't play games or watch videos on it so a bigger size just equals inconvenience to me (and apparently many others). I'll be interested in the 5c when it comes out.
Reactions: Benjamin Frost, Sea Bass, Ladybug and 1 other person
You must log in or register to reply here.
Share:
Facebook Twitter Reddit Email Link
Top Bottom