The U.S. Patent and Trademark Office published a several dozen Apple patent applications this morning, and Unwired View highlights one group of them primarily related to iPhone software. The patents cover object and facial recognition, messaging, and voice modulation.

Object Recognition: One patent application, filed on June 17th, 2008, describes methods by which a mobile device user could detect an object via camera, RFID sensor or other means and have their device automatically identify and provide additional information on the object. In Apple's background information on the patent, an example of an art museum is used, describing how a user might take a photo of a piece of art and wish to have it automatically identified and additional information on it provided, or engage in an audio tour or podcast and wish to access additional content beyond that provided in the audio files. 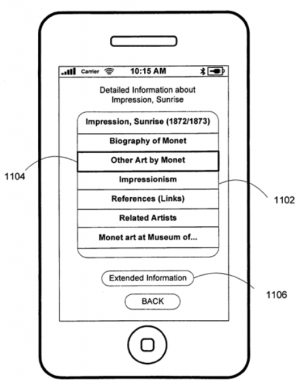 Object recognition
Facial Detection: Another patent application, filed on March 8th, 2008, addresses the use of facial detection to allow a device to determine whether a user is passively interacting with the device. As an example, Apple describes how a user watching a video may have to periodically interact with a device in order to prevent a screen saver from activating. Apple's invention utilizes automatic facial detection via a camera on the device to determine that a user is present. The method may also be used to grant or deny users access to restricted applications or other data.

Message Filtering: Conceived as an extension of Parental Controls, this application, filed January 3rd, 2008, covers the ability for users to filter incoming or outgoing text-based messages based on their content. User-defined criteria could allow messages containing objectionable material to be edited to remove the content or be blocked entirely. Additionally, the technology could be used to require certain content to be present in messages. For example, a parent might require that messages contain proper spelling and grammar, or certain vocabulary words, or a certain number of words in a foreign language over a set period of time in order to aid a student in his or her studies.

Managing Multiple-Recipient Messages: In a patent application filed January 6th, 2008, Apple describes a method for managing messages with multiple recipients. The invention covers the ability for an application monitor whether the message has been delivered to all recipients, and if not, provide a simple interface for resending at a later time to those who have not received the message.

Unread Message Alerts: An application filed January 3rd, 2008 covers the ability for a device to automatically provide unread message alerts when a user is about to contact another party. For example, as a user begins to compose an e-mail to another person, the device may alert the user to unread messages from the second party that they may wish to view before sending their e-mail. The alert criteria may simply include the message recipient's name, but could also be expanded to specify content on the same subject as the intended message. 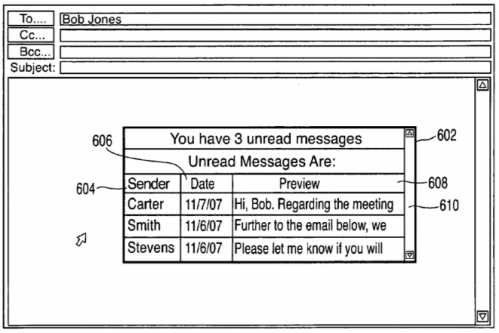 Unread message alerts
Voice Modulation: In a final patent application filed April 2nd, 2008, Apple describes methods for modulating voice audio output to simulate additional voices. Apple's examples describe a mother who could have an audiobook read in her voice to her child or a student who wishes to alter a section of a podcast lecture for emphasis.

Cool wonder how many years before we see it
Comment

Closer and closer we get to my AI interface. Come on future, hurry up already.
Comment
C

Pre loaded apps and songs will be great!
Comment

Facial recognition . . . not what I was expecting. It watches me while I'm watching it? And then sends my face and location to the government, right?!?!
Comment

Cool. The future today. It looks like Apple want to put RFID tags on every object in the world. iPhone users will be the Ones with "The Knowledge."
Comment
C

I wonder how many of these we will see in the next gen iPhone.
Comment
P

the snaptell app does some of this already, and it works pretty well. you can take a picture of a cd, magazine, product, etc. and get quite a bit of additional information about it.
Comment
U

When someone actually makes this work, they will have to pay Apple or be sued. This is kind of annoying ... it doesn't encourage people to try to make real working systems, when this stuff has already been patented by someone who does NOT have a working system. This is not unique to computers/electronics either. My company fights this all the time. Time for patent law reform, IMHO.
Comment
L

Quit focusing on features and focus on the battery. That will buy you more and happier customers than 4,000 minute features that are rarely used.

Give me a damn battery that lasts longer than a day with use!
Comment
M

So the object recognition is like the SnapTell app I'm assuming?

All this stuff sounds cool though, especially the facial recognition. Man that would be nice. How cool would it be where if someone is looking at your iPhone, when a text comes in it checks the face first before displaying the message badge on the screen?

Just throwing an idea out there, but I'm sure the forum geniuses will smash it...haha
Comment

How soon until someone brings up that the patent proves the next iPhone will have a front-facing camera?
Comment
E

Warbrain said:
How soon until someone brings up that the patent proves the next iPhone will have a front-facing camera?
Click to expand...

I think the idea of facial recognition to see whether a user is present or not probably involves a front-facing camera, as no one watches a video on the back of their phone.
Comment

Few patents are base patents for a broad topic. Most patents are for a very particular method of doing something, and can usually be gotten around easily.

For example, Apple's patent on a certain way of recognizing directional scrolling. (The one that fanboys thought was about multi-touch.) It hasn't stopped anyone else from having the same user action, because they just use different algorithms.

Likewise, there are plenty of examples of object recognition where the user is given related information. So no one can get a broad patent on doing that.

In this case, Apple's application specifies that the device uses "an RFID reader;a camera; andan IR image capture device", and has to be put into the correct recognition mode (e.g. museum, restaurant, etc).

The point is: no one's going to have to pay Apple anything. The more important takeaway information is what kind of neat things we'll be able to do as users.
Comment
J

MacRumors said:
Object recognition
Facial Detection: Another patent application, filed on March 8th, 2008, addresses the use of facial detection to allow a device to determine whether a user is passively interacting with the device. As an example, Apple describes how a user watching a video may have to periodically interact with a device in order to prevent a screen saver from activating. Apple's invention utilizes automatic facial detection via a camera on the device to determine that a user is present. The method may also be used to grant or deny users access to restricted applications or other data.
Click to expand...

I suggested something like this for getting your texts on the computer rather than your iPhone (which you have to take out of your pocket if you're at the computer):

"I can imagine some technology to detect when you're at the computer, during which time texts will appear on the computer but as soon as you walk away (or look away) they'll arrive on the phone. This technology already exists in high-end Lexus to detect drivers dozing off or not looking right before a crash to slow down the car. And, of course, it can always been switched off for those who don't wish to use it."

Some cool stuff there. I like the object recognition idea. I think that the iPhone is going to do some amazing things in the next few years to help out in everyday life.
Comment
C

Software patents generally suck (I know - I have one) because they are usually either too broad, usually filed by companies that want to sue for licensing for related ideas) or too narrow (perfectly applicable, but easy to circumvent).

If I was a patent office reviewer, I would strike most of these down based on prior art.

Google, Microsoft, and several research projects have done the object recognition. This does, however, explain why Apple has squashed the ability for app store developers to directly access the video stream - if you could do true AR on the iPhone, there would be a dozen apps that would do what this patent covers out before the patent could be approved.

Facial attention recognition is nothing new. It sounds like the only novel claim is pausing a movie when you aren't watching it.

The unread message alerts is very similar to what GMail does already ("You have 2 unread messages in this thread" when you are composing a reply).

The two messaging improvements probably novel, but narrow (unless their lawyers get lucky and manage to encompass all filtering of IM/SM content).

The voice modulation thing has been done to some extent already. If I'm reading it right, it's like reading bold, italicized, or highlighted sections of rich text in an emphasized (or different) voice. I've seen markup systems for text-to-speech that do the same thing.
Comment
E

LOL most galleys are not stoked about photograph I believe... defiantly no flash photography.
Comment

EnigMoiD said:
I think the idea of facial recognition to see whether a user is present or not probably involves a front-facing camera, as no one watches a video on the back of their phone.
Click to expand...

But anyone with common sense knows that you don't always see patents come to market.
Comment
J

This could be some cool technology. Of course because a patent was applied for doesn't mean it's going to be used or that it's ready at the moment. Apple is constantly churning out ideas, I don't know that I'll ever be surprised by what they think of next.
Comment
P

Profiles..
I have no 3G or WiFi reception at my office, so unless I switch these off, my battery is near empty by the time I get home.

So i can with a few gestures select an "office" mode and everything off apart from the phone and Edge.
Comment

the facial detection one sounds awesome as a security measure. would have to be very accurate though.
Comment

Such technologies need 4G network and front facing camera, i think that's in 2-3 years. The world is not there yet with the network speeds.
Comment
I

mattwolfmatt said:
Facial recognition . . . not what I was expecting. It watches me while I'm watching it? And then sends my face and location to the government, right?!?!
Click to expand...

I once tried to get a gullible friend to believe you can play a movie in itunes and it will pick up from where you fell asleep the night before. This is totally that!
Comment
You must log in or register to reply here.
Share:
Facebook Twitter Reddit Email Share Link
Register on MacRumors! This sidebar will go away, and you'll see fewer ads.
Sign Up
Top Bottom