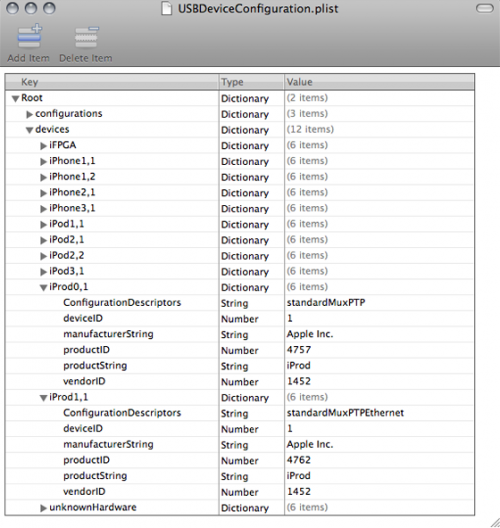 Image from Ars Technica
Ars Technica reports that the latest version of the iPhone OS 3.1 beta seeded to developers last week contains an updated configuration file that references two mysterious products known as "iProd0,1" and "iProd1,1". A reference to "iProd0,1" was initially spotted back in March in a version of the same configuration file in an iPhone OS 3.0 beta, but this latest reference to "iProd1,1" appears to be a new addition.

The iProd1,1 device has been assigned a new productID of 4762 (versus 4757 of iProd0,1) and assigned a different ConfigurationDescriptor of "standardMuxPTPEthernet." iPhone models also have this designation, and the additional interface identified in the plist for this configuration is "AppleUSBEthernet." The consensus here seems to be that the new device may have gained high-speed networking capabilities -- though the iPhone uses the interface to tether to a laptop to share its 3G connection.
Click to expand...

The numerical designation on "iProd0,1" suggested that the device was simply a prototype, but the new addition of a "1,1" version of the device implies that it may now be approaching a public release.

While exactly what the "iProd" designation is referring to remains unknown, speculation of course centers on Apple's rumored tablet computer, although whether that device would run iPhone OS in some capacity or something more similar to Mac OS X is not clear. Other possibilities raised by Ars Technica include a next-generation iPod nano rumored to include a camera (although it seems doubtful that this device's operating system would be based on Phone 3.0) or Apple's fabled "iPhone nano".

References to unreleased products "iPod2,2", "iPod3,1", and "iPhone3,1" also continue to appear in the configuration file. The "iPhone2,1" device discovered in a similar manner in January eventually turned out to be the iPhone 3GS.

Maybe the iProd is the fabled Mac Tablet? As for iPhone 3,1 it was a given
Comment
T

Is this thing going to play music and poke me for $1499?
Comment

It's looking more and more likely that the Tablet will run some version of the iPhone OS as opposed to OS X.
Comment

I cant wait until next month, I am in need of a new iPod Touch as my first gen. battery is not lasting very long anymore and my headphone port is getting worn out.
Comment

iProd will deliver a slight electric shock whenever anyone mentions the Google Voice debacle, Steve Jobs' health or where in the hell is MMS.
Comment

The new iPro Device? I can only hope this is the iPro MacTablet.....
Comment
A

What else could this be? Like the article said, it's clearly not a nano, unless they're magically switching to an OS meant for a touchscreen that's larger than the nano itself.
Comment

iProd means "I Product"..So it seems the "tablet device" will be labeled within the iPod lineup.

The brand new totally reinvented iPod. Now featuring a revolutionary radio transmitter. Picking up both AM and FM frequencies. Yours for only 349$
Comment
C

GeekLawyer said:
It's looking more and more likely like the Tablet will run some version of the iPhone OS as opposed to OS X.
Click to expand...

Its not the new tablet... its a device to get cows moving...
Comment

Smells like a generic marker to be used for any unreleased but in product testing to me. Allows Apple to put a Touch, nano, phone, tabel, umbrella, coffee maker , etc. out there in testing onto the internet and folks won't know what it is. Or maybe it is a wifi equipped cattle prod.

Surprising Apple hadn't developed an earlier adaptation to folks "dumpster diving" through beta releases looks for new products sooner. The beta versions of the OS are going to go to folks who don't need to know. This way they don't know what it is; only that something is coming. Something new is always coming up so that is non-informative.
Comment
A

I wasn't sure which section to post it
in. But I did submit it as news/rumor by filling out the form.
Comment

The "Pro" could mean something like iTablet Pr or iPod Pro. At this time it can be anything.
Comment

Its not the new tablet... its a device to get cows moving...
Click to expand...

Cows...or people? Is Apple getting ready to really leverage their power over the consumer?
Comment

Could be a tablet, could be something else. If it is a tablet, it might just as well run the iPhone OS, as I don't think snow leopard was made with touch in mind like windows 7 is.