Over the past several weeks, a number of renderings and even physical mockups of Apple's rumored "iPad mini" have surfaced, offering a good idea of the device's size and appearance should the leaked specs being used by case makers prove accurate. While a number of the renderings and mockups have shown the iPad mini next to existing devices like the full-size iPad or iPhone, a new set of photos [Google translation] reposted by Nowhereelse.fr shows the best view yet of how the device will look in the user's hand. 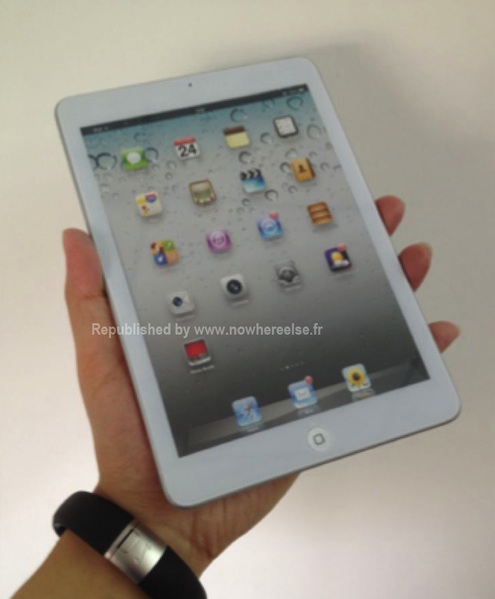 The device shown in the photos is clearly a physical mockup along the lines of those seen previously, but the photos demonstrate how the device would fit easily into most users' hands, cradled in just one hand with the fingers and thumb able to wrap around and grip the edges of the tablet. 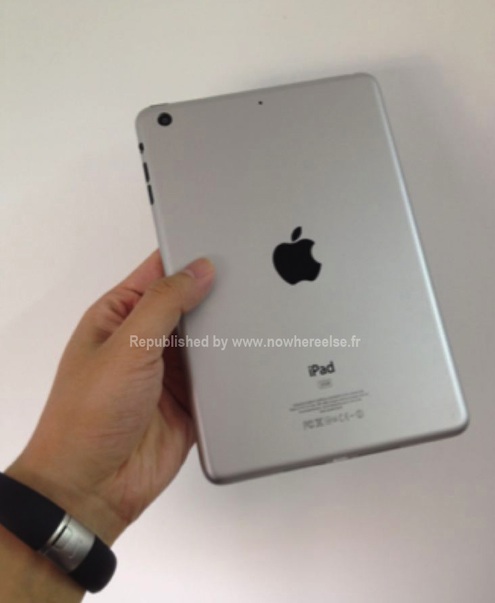 As shown in the photos and previous images, the iPad mini is expected to retain the iPad's 4:3 aspect ratio for the display, but relatively narrower bezels on the sides of the device will make it more comfortable for users to hold than if it contained bezels of uniform width around all four edges.

Apple is expected to hold a media event in October to introduce the iPad mini, holding off on the debut in order to give the iPhone 5 and the iPad mini their own time in the spotlight.

My life finally has meaning.

It actually looks a little too small in these pictures? I guess I'll have to see it in person though.

There's those extra inches the iPhone didn't get....

This would be good for my little boy (2yrs). Its only matter of time before he breaks my iPad as its a bit big and heavy for him.

I know they have different sized computers, but I just have a hard time understanding how they're gonna market this smaller iPad.

I mean, I'm almost 100% sure it will come out, but they advertise/push mobile devices way more than they do for Macs.

Its clear 4 can fit...and probably more if it gets jailbroken.

Doubling down on nothing

It'll probably (and hopefully) be four. Don't put too much emphasis on a mockup intending to show the physical aspect rather than the OS itself.

EDIT: anyone have any ideas as to how much the iPad Mini may cost based on rumours? I couldn't find any based on a quick search. Thanks.

I think this thing will outsell the larger iPad.

That's pretty convenient to be able to grip the thing with just one hand. I didn't even think of being able to do that.
T

Probably just the one in the picture having some removed. I would imagine at least 4...

I always felt the iPad was a little too big and heavy. This one certainly interests me, I just hope it comes with retina and they don't put a crappy cpu/gpu inside.

gregwyattjr said:
That's pretty convenient to be able to grip the thing with just one hand. I didn't even think of being able to do that.
Click to expand...

Yeah it actually is even better on the nexus 7 as you don't have to stretch your hand as much. I think on this mini it would be a bit uncomfortable though as its quite a bit wider than the nexus.
B

I like the size. I've been trying to justify the purchase of an iPad since the beginning, but I couldn't. If Apple release an iPad mini (or nano, or whatever they call it) for a $200/$250 prince range, I will get one.
H

Judging by the fuzziness of that picture I'm guessing the hand doesn't come in a Retina Display.

Looking good. Was toying with getting a nexus 7 or possibly a Kindle HD, but an iPad mini would be better suited for my needs (iTunes eco system)...

However after being spoiled with the New iPad's retina, I fear the benefit of a lighter iPad for reading in bed is going to be somewhat diminished by the lower resolution.

If there was an option for a 7.85" retina version I'd be all over it in a heartbeat, and would possibly sell my 9.7" new ipad and have a look at a RT Surface or such for messing around with.
T

The ladies are going to love the smaller size... Oh wait.

if it isn't 199, expect them to completely blunder their sales goal. 250 would be OK, but anything more than that, i really doubt people are going to spend money it. might as well just get an iPad with retina display and a more powerful processor and better graphics for a a little more.
You must log in or register to reply here.
Share:
Facebook Twitter Reddit Email Share Link
Register on MacRumors! This sidebar will go away, and you'll see fewer ads.
Sign Up
Top Bottom