Nomad today announced a new product, the "Wallet for iPhone," which hides a small rechargeable battery cell within a traditional billfold wallet. The 2,400 mAh lithium-ion battery is housed in the hinge of the Wallet and promises to provide a full charge to an iPhone 6s. Owners of an iPhone 6 Plus or iPhone 6s Plus will probably only see half the charge of their phone restored due to the smaller battery size of the wallet. 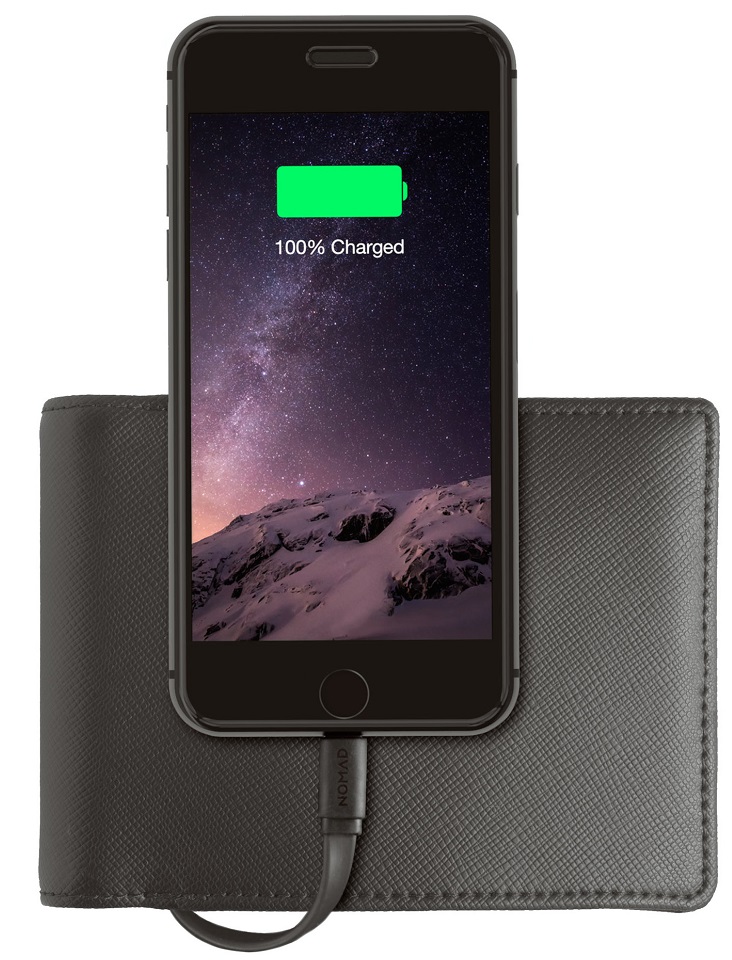 We went to the absolute extreme of lithium-ion battery tech and ultra compact circuit boards to make this an ultra high density battery system. We used an advanced SoC (system on chip) microprocessor and 01005 grade components which allow us to pack a huge 2400mAh battery providing a full charge for your iPhone 6s.
Click to expand...

The company claims that the Wallet is no thicker than the average billfold wallet, even when counting the increased weight of a wallet full of credit cards and cash. The normal functions of the wallet allow it to hold six business or credit cards total. Specifically, Nomad gives its dimensions as 25 mm max thickness, 85 mm wide, 125 mm long, which it calls "thinner than most men's billfolds."

When users want to charge their iPhone, an integrated 3.5 inch Lightning cable is simply removed and plugged into the device to begin refilling its charge. The Wallet will function with any iPhone supporting a Lightning port, and promises one 100% charge to each device on a full battery. The Wallet itself is recharged via micro USB cable -- taking up to two full hours from an empty battery -- and four LED lights on its underside show a visual representation of its charge level.

Nomad's Wallet can be pre-ordered now for $79.99 with a shipping date of November 15, with orders placed from that date on being charged the full retail price of $99.99

I think this is a great idea. A tad expensive though
Reactions: BvizioN, Benjamin Frost, ibirmingham and 1 other person
T

I'm not sure, it kind of looks like a pain in the ass...
Reactions: HopefulHumanist, CPx, ignatius345 and 5 others

Tethering my iPhone to my wallet. That will make it so much easier for criminals who have trouble choosing between stealing my iPhone, credit cards or cash! Take all three with one swipe! And get a charging unit as a free bonus.
Reactions: HopefulHumanist, SirCheese, Benjamin Frost and 1 other person

They lost me at micro USB. Why not license the Lightning connector to charge the wallet too?
Reactions: Tumbleweed666
S

Cool idea and not unreasonably priced depending on the craftsmanship.
X

rdlink said:
They lost me at micro USB. Why not license the Lightning connector to charge the wallet too?
Click to expand...

No third party has been able to license the lightning connector (rather, the female lightning socket) for their own products thus far.

Battery life is still apparently an ongoing issue for people who carry wallets.
2

LOL. I was thinking the same thing.

Personally, I am trying to get rid of the wallet. Using Apple Pay will someday eliminate much of the need for the Wallet. Still need to figure out how to get the driver's license/identification into the iphone/watch and then, poof, no more wallet. Maybe a money clip for the occasional bills.

So this is what Phil Schiller had in his back pocket when he introduced the Mac Pro.
D

Actually, this one has.

Considering the slim profile, it's actually pretty impressive and it can recharge an iPhone 6 all the way. But I've had bad experiences with Nomad in the past so I'll pass.
Reactions: jocamero
K

Well look what it has become. Users of this product will have to literally charge their wallet. What next? Rechargeable credit cards?

Can it survive being continually say upon?!

Been able to, or been willing to? Honest question, because I genuinely don't know.

There are cheaper, portable options (Apple approved, at that)... Especially for 2400 mAh...
E

I see what you did there...

yeah with all the reports of batteries exploding I want one on my ass.

Looks intriguing, but whether or not you actually ever receive this item from Nomad after ordering is the big question.
L

Who needs the female socket? The Apple Pencil can charge via a male-to-male lightning connection.

Edit: with an adapter of course.

Carrying a battery in your rear pocket...sounds like Kramer and Newman came with the idea...
F

But why sew them together? That makes neither the wallet better nor the battery. In fact, neither will be as slim as it could be at times when you just need one.