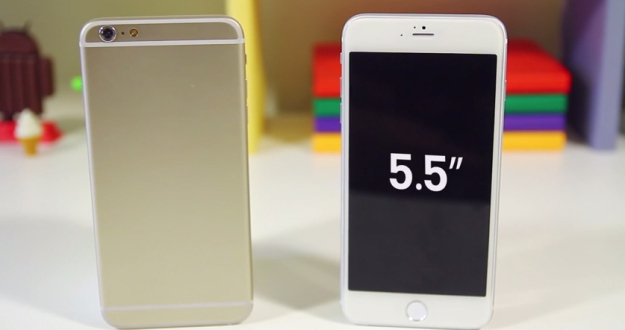 5.5" iPhone 6 model photo via TechSmartt​
The site says that the storage size difference would act as a major differentiator between the 4.7-inch and 5.5-inch models other than display size, allowing people to get a true "phablet" experience with lots of storage space to save various documents and data. This would partly mirror Apple's iPad models, which allow for up to 128 GB of storage while iPhones only allow up to 64 GB of storage.

In addition to a larger display, the iPhone 6 is expected to launch this September with a thinner design, a faster processor, and an improved camera. The larger 5.5-inch iPhone 6 is also rumored to exclusively have optical image stabilization to also differentiate it from the smaller iPhone 6, which will instead have an advanced lens module.

Commence the outpour of complaints.

Steve wouldn't have allowed this.
How am I gonna hold it with one hand?
How will I fit this in my skinny jeans?
Might as well put a phone in a iPad mini.
If I wanted a Phablet, I'd buy a Samsung.
But will Safari be snappier?

This is going to piss off a lot of people.
Comment

In the midst of it

Oh boy. This is going to make many people upset
Comment

Would Apple really make the 5.5" iPhone their flagship model with the best features? That would be disappointing.
Comment
F

I'm taking this with a grain of salt since we also had rumors of the 5S to have the same higher capacity. But this would definitely be my next purchase if Apple will indeed give us this storage size.

It's about time. Android is enjoying their micro SD cards with 128gb capacity. Bring it, Tim!
Comment
T

Only make sense...Every Apple product line has "premium" and regular products.
The 5.5 is going to carry a premium price, so there will be "premium" features like larger storage, optical image stabilization, and possibly sapphire glass.
Comment
D

What is everyone going to do when neither of these 'iPhone 6's' come out?
Comment
M

Both this and the OIS feature are things that take up space on the chassis, as it's likely that Apple would hit 128 gb by combining 2 64 gb modules. Not saying Apple couldn't get it in both, but they clearly are making trade offs between features and size. Not really a problem, it'll be fun to have choices.

I know you guys want all the features on all of the phones, but to be fair, even the 4.7 model will be a better iPhone than ever released so either way we win.
Comment
S

dscottbuch said:
What is everyone going to do when neither of these 'iPhone 6's' come out?
Click to expand...

They're gonna say "Steve wouldn't have allowed this to happen".
Comment

SJism23 said:
Would Apple really make the 5.5" iPhone their flagship model with the best features? That would be disappointing.
Click to expand...

They must have read the other thread and created a new headline to generate more hits.
Comment

What I need even more than that: a deep, soul-searching re-evaluation of what I REALLY need to have stored offline on my phone 24/7/365.

(Note to Apple--the final piece of this puzzle: let me delete an app and reinstall it without losing my app data. Prime example: games are huge files! And I hate to lose my progress. Let me store only my favorite few dozen games of the moment, yet let me re-install ANY of my zillion games at will and pick up right where I left off. It's not as though saved-game files will take up that much iCloud space. This would make both iCloud and local backups SO much more useful than the current all-or-nothing-or-weird-hack approach.)
Comment
I

Steve wouldn't have allowed this.
How am I gonna hold it with one hand?
How will I fit this in my skinny jeans?
Might as well put a phone in a iPad mini.
If I wanted a Phablet, I'd buy a Samsung.
But will Safari be snappier?

Too expensive. Too ugly. Too late. Too iOS. Too Apple. Too Samsung.
Comment

I'm personally expecting the 5.5" version to have a higher CPU clock, kind of like the difference between the retina iPad mini vs the iPad Air.
Comment
B

ashwin4 said:
Oh boy. This is going to make many people upset
Click to expand...

If this is true, then I'm one of them. Having premium options is one thing, but basing those options on device size makes no sense.
Comment
B

dscottbuch said:
What is everyone going to do when neither of these 'iPhone 6's' come out?
Click to expand...

Complain, then buy the one that does come out.
Comment
J