Oppo has announced a record-breaking fast charging technology that is around twelve times faster than the iPhone 13 lineup. 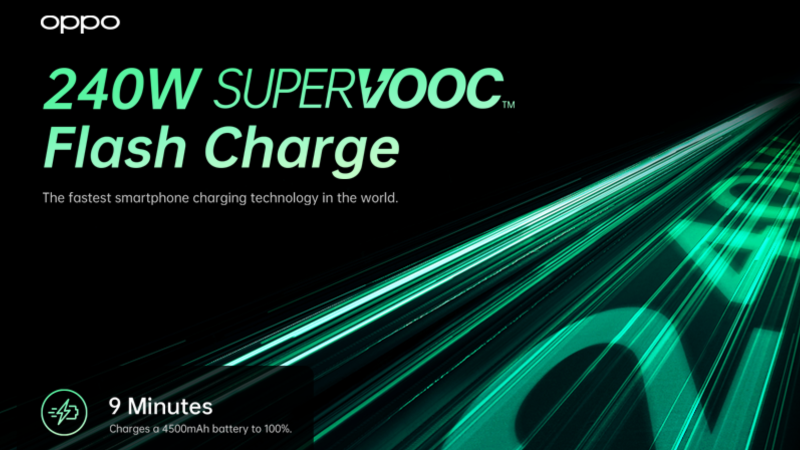 The first, which Oppo calls "150W SUPERVOOC flash charge," features charge pumps and can charge a device with a 4,500 mAh battery to 50 percent in five minutes and deliver a full charge in just 15 minutes. 150W SUPERVOOC includes Oppo's Battery Health Engine, which recently debuted in the Find X5 lineup, to keep the battery at 80 percent of its original capacity after as many as 1,600 charge cycles – double the industry standard of just 800 cycles. Oppo will introduce 150W SUPERVOOC on selected OnePlus devices in the second quarter of 2022.

Oppo says that the 240W SUPERVOOC charging system contains five safety protection measures, including a custom-designed control chip that monitors voltage, current, and temperature, and conforms to standards for heat dissipation despite the very high power output. Oppo did not say when the first devices with 240W SUPERVOOC will be released.

With a 20W power adapter and a Lightning to USB-C cable, users can charge an iPhone 13 from zero to 50 percent in half an hour, and fully charge in about two hours, which is significantly slower than either of Oppo's new charging technologies. Last week, Oppo announced plans to directly compete with Apple on a global scale with a wave of premium devices, starting with the Find X5 models.

I’m not going to lie. That is impressive. Lol. I don’t keep my phones for years, so this would work for me.
Reactions: SenorWhyMe, Jovijoker, Shirasaki and 11 others

Probably gonna be murder on the battery lifespan.

edit
I dont care what they say about retaining battery capacity, I’ll believe it when its been true and tested in the public
If it really, for really real doesn’t destroy the battery lifespan then well done, well done indeed.
Last edited: Mar 1, 2022
Reactions: Captain Trips, snipr125, DieselOneV12 and 43 others

really, we NEED that?
what's the impact on battery life?
Reactions: Captain Trips, fod_dzug, Apple fan from Korea and 7 others

Wow! Wonder what the true battery lifespan will be on these? Hopefully this won't make the batteries like HP's printer ink cartridges; they need replacing often.
Reactions: Jovijoker, Shirasaki, amartinez1660 and 3 others
N

breather said:
Probably gonna be murder on the battery lifespan.
Click to expand...

150W SUPERVOOC includes Oppo's Battery Health Engine, which recently debuted in the Find X5 lineup, to keep the battery at 80 percent of its original capacity after as many as 1,600 charge cycles – double the industry standard of just 800 cycles
Reactions: frifra, SenorWhyMe, Oblivious.Robot and 28 others

Countdown until one of them burns someone's house down...
Reactions: frifra, 1984, Captain Trips and 21 others

Wow! That’s pretty impressive. The impact on the battery life doesn't seem too good tho. I have a feeling it degrades the battery a lot faster too.

I guess the race to fastest charging is on. ? ⚡️?
Reactions: svish, snipr125, Jovijoker and 8 others

I'd wanna see that 240W power adapter. I mean, even GaN, this thing is going to be big!
Reactions: Jovijoker, carltabet, LeadingHeat and 3 others
N

Danfango said:
Countdown until one of them burns someone's house down...
Click to expand...

I wish apple would hurry up, they are so slow on adding things, I don't wanna hear its bad for the batt, I want new tech now
Reactions: bLackjackj, Jovijoker, amartinez1660 and 11 others

I hope their phone has an easily replaceable battery.
Reactions: Captain Trips, amartinez1660, SFjohn and 5 others
I

There are definitely times I would opt for this even knowing the hit the battery would take. Make it an option and everyone wins.
Reactions: Jovijoker, V.K., ASentientBot and 2 others

By the time new technology like this hits the market I am sure it was taken to all the big dogs to see if they want to license it. Or, they could be introducing the product without having any large scale manufacturing capability and then shop it around to see who wants to incorporate it. New tech is nice, but you also have to think of everything involved to create it reliably and without running out of the capability to manufacture it. That takes lots of contracts of all shapes and sizes. Apple is trying to take away ports and go all wireless before they focus on faster charging. If they can incorporate docking your portable devices or sitting close enough to some power station that wirelessly charges some of them, they can gradually speed that up over time.
Reactions: aimson911 and iGMX
M

Kylo83 said:
I wish apple would hurry up, they are so slow on adding things, I don't wanna hear its bad for the batt, I want new tech now
Click to expand...

I'd rather they wait until it is proven to work before adding new fangled technologies to things that have long term negative consequences.
Reactions: zapm, iGMX, FightTheFuture and 7 others
J

macintologist said:
I'd rather they wait until it is proven to work before adding new fangled technologies to things that have long term negative consequences.
Click to expand...

that's always the answer, android has had faster wired and wireless charging for ages and its fine, apple sticks to same wattage for years
Reactions: Agit21, dk001 and Okasian
O

I'm waiting for a charger that requires me to install a 240V electric clothes dryer socket to charge my phone in 2 seconds.
Reactions: ericlmercer, wanha, tk421 and 12 others
J

that was my first reaction too, and in my reply, but ... battery technology for cars lets you charge an EV battery 0-80 in 30 min or so, and that has little impact to battery life. So, this is likely NOT your "standard" LiIon battery ...
Reactions: TheSapient, Mr.PT, dk001 and 2 others
L

I guess my question is… why?
I get why fast charging is a thing. Having your phone go from 0 to 50% in 30 minutes is impressive and useful.
But The vast majority of consumers just charge their phone while they sleep, does it really need to balloon to 100% in nine minutes?
Having your phone at 100% already isn’t very good for it, most agree that best for the battery health are cycles between 80 and 20%.
That’s why the iPhone has features delaying the full charge of it until you’re about to get up and use the phone, to keep it from staying at 100% for too long.
There’s just no point.
And even if your phone doesn’t have the best battery and won’t last you for the full day, if you can’t step away from it for more than nine minutes I feel like that says more about you than it does the phone.
Plug it in, Watch a movie, take a shower, do literally anything else. The phone will still be there, all charged up when you’re done.
Reactions: JohnnyCactus, Morgenland, Taz Mangus and 5 others

Iphone users getting this in 5-10 years
Reactions: aleni, ASentientBot, JJL2026 and 3 others

I just purchased the last two 5 watts original Apple chargers in my city, not available anywhere.

I’m the opposite of this, I like to slow change my devices.
Reactions: wanha, Dissonance, ikir and 7 others

I never understood fast charging but maybe it’s because I haven’t had a phone that dies in the middle of the day since the iPhone 6 Plus.
I guess it’s useful if you forget to charge it overnight but I think I’d rather carry a small battery pack with my instead of blasting my battery with 240 watts.