Pennsylvania resident Samuel Lit has hit Apple with a lawsuit claiming that the company infringed on his patent for web carousels, according to documents filed in the Northern Illinois District Court (via AppleInsider). Apple's website typically features a homepage with a carousel containing four to five windows displaying its products. 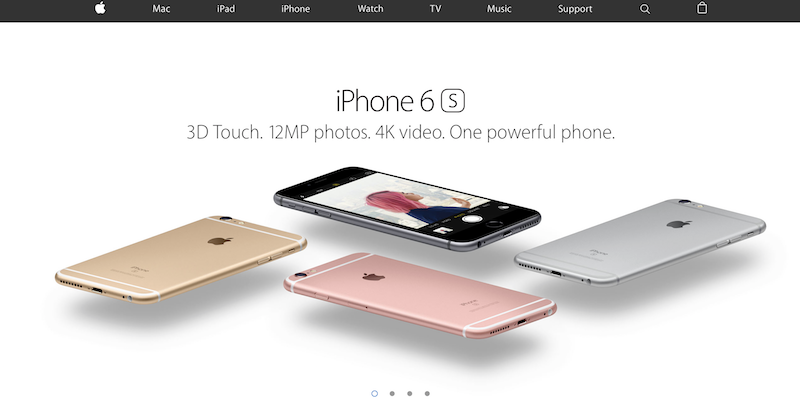 Lit owns U.S. Patent No. 8,793,330, which is a "system and method for displaying graphics, art, text, animation, video and other content." It's described as a "three-dimensional 'Display Carousel' system" that can cycle through its windows in a rotating manner that makes it look like a carousel at a predetermined speed.

The lawsuit claims that Apple's website, which also has a system that cycles through windows in a rotating manner at a predetermined speed, infringes some or all of the 20 claims of the patent. Some of Apple's infringements on Claim 16 include having a "system for displaying content," a "display carousel embedded" into the website, a display engine to deliver the carousel content when its on a web browser, and a database to track how many customers purchase things linked from the carousel.

Lit is seeking "reasonable" royalties with interest. While Lit is a radio broadcaster, he used to work with software systems and engines for Hy Lit Radio Technologies, which was named after his father Hy Lit, another radio broadcaster. He previously attempted to monetize his patent via a website called YourDisplayCarousel.com but the site shut down in December.

This is a joke? May as well sue the entire internet. Bloody patent trolls...
Reactions: ex0dus1985, h4lp m3, DJ Dilbert and 51 others

didn't the iPhone already have a Carousel?
Click to expand...

This is going to be funny. Everyone desperately trying to sue a giant multi-billion company. They're going NOWHERE buddy.
Reactions: h4lp m3, surf2snow1, NamE_O and 6 others

My bus stop has a poster in it which regularly scrolls to a different advertisement. I've seen these for 20 years. Frivolous lawsuit.
Reactions: tongxinshe, mrmyk, TruthWatcher412 and 13 others
S

Just goes to show you that if you're going to run a large tech company,...

... you're going to have to put your lawyers to work on stupidness.
Reactions: ex0dus1985, zzLZHzz, mrmyk and 11 others

didn't the iPhone already have a Carousel?
Click to expand...

Even Mac OS X Panther in 2003 had a carousel animation when switching users, and MacOS still uses it to this day...
Reactions: ex0dus1985, sshambles, pianophile and 16 others

Glassed Silver said:
Wow... he got a patent on that?
Kill me now.

I could kill you but then I would be suit because I bet the way I am going to kill is already patented.
Reactions: Junior117, ejb190, MacAddict1978 and 11 others
J

MacRumors said:
He previously attempted to monetize his patent via a website called YourDisplayCarousel.com but the site shut down in December.
Click to expand...

Well, that explains it. If at first you don't succeed... try, try to sue.
Reactions: Dinsdale, Konrad74, hanafuda and 2 others

I used "Display Carousels" on old web sites I used to create / maintain way back in 2000, 2001...but they were Flash. I removed one of them - eventually all flash from the sites after iPhones would never put flash on the Safari browsers.

Hmm, darn you Apple. I should sue for making me do this!
*just kidding.

Flash is evil and this lawsuit is a total joke! This guy is actually the son of a legend in local radio.
Hy Lit was pretty big back in the day in Philly radio.

Has he named the marquee HTML tag in the lawsuit.
[doublepost=1467940394][/doublepost]I was expecting him to say "it spun too fast and made me dizzy."
Reactions: Makosuke

I can feel my sarcasm detector going haywire. Can he be serious? No. Is he serious? Yes. What is the world coming to?
Reactions: mrmyk, PhillyGuy72 and centauratlas
J

The US Patent Office has been a joke for a long time now...
Reactions: tongxinshe, surf2snow1, Aston441 and 6 others

My God. What a waste of resources.
Reactions: tongxinshe, surf2snow1, attila and 10 others

Glassed Silver said:
Wow... he got a patent on that?
Kill me now.

come here then... you can pick. head in a vice?

Guess I better change my website too... /s
Reactions: PhillyGuy72, centauratlas, t1meless1nf1n1t and 1 other person

Are you sure he's not from Florida?
Reactions: MacAddict1978, linkmaster02, Krafty and 5 others