With Apple's new Mac Pro scheduled to launch this month but no exact availability date having been disclosed by Apple, many customers have been anxiously awaiting word on when the machines will be available for ordering. It now appears, however, that units are starting to make their way to Apple's retail stores, suggesting that a launch may be imminent. 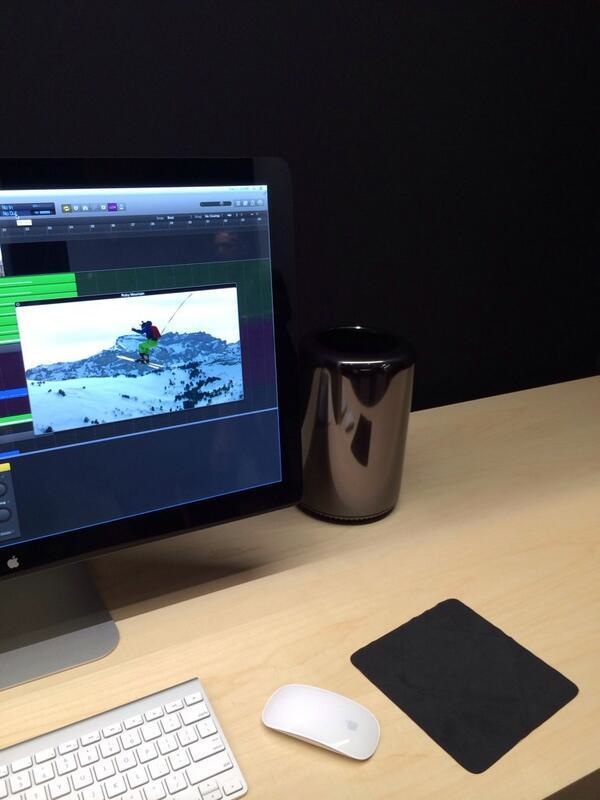 One Twitter user has posted a photo of the new Mac Pro on display today at the Bromley store in the United Kingdom. The Tweet has apparently since been deleted, but has remained viewable to some users due to caching.

A follow-up Tweet indicates the store has received just three units so far, with more due later this week.

Apple frequently releases new products on Tuesdays, and thus the delivery of new Mac Pro units to Apple's retail stores could point to a release tomorrow, although there have been no specific claims of a Tuesday launch.

Update: It appears that this image may be from Apple's October 22 event that gave press a chance to look at the Mac Pro.

Time for someone to make "This is not a Trash Can' stickers for all the new Mac Pro buyers.

I have to say, it does look really cool on a desk next to a big moniter.

Damn they look good.
I had thought the height might have been taller but it really is an 8th the size of the previous Mac Pro.
Great stuff

I would really like to buy one ... but the low-end will be underpowered and the high-end unaffordable ....sadly.
U

I hope on launch day they also revamp the GPU options and allow customers to opt for a single AMD 2XX series card... not everyone needs two or even a single FirePro card and not every application takes advantage of the GPU either. Doing this, would increase sales.... the baseline price tag is too high.

At last! Very soon we can start the "What I want in the next Mac Pro" threads.

pmau said:
I would really like to buy one ... but the low-end will be underpowered and the high-end unaffordable ....sadly.
Click to expand...

I think underpowered if the wrong word.
N

It's a Mac Pro Christmas!

They're beautiful and a lot smaller than I thought too.
D

Now if someone would run FCPX on it to see if there is a new version installed.
S

Nice to see a picture of one that's not CG or behind plexiglass.

Looks a lot smaller than I thought. Still sexy though.

This appears to be fake. The picture looks very much like the pictures from the Apple event in October:

What a great way to show off the power of the new Mac Pro by using a 4K Thunderb...oh wait that's just the same old display Apple released in 2011.

So I guess no demos of FCX running the little preview window at 1080p?
5

Incredible, the first photo of this machine to surface in the wild is at the Apple store 30mins drive from my house.

Heading down there tomorrow then...

It sure is shiney!
5

random-uk said:
This appears to be fake. The picture looks very much like the pictures from the Apple event in October:

Well. That's that then. I had 2 pretty exciting minutes, now back to waiting.
S


random-uk said:
This appears to be fake. The picture looks very much like the pictures from the Apple event in October:

That sucks if it is fake

jetjaguar said:
That sucks if it is fake
Click to expand...

The black curtain behind it gives it away.

Okay, it could be wishful thinking, or perhaps just how the Mac Pro's shape distorts objects in its reflection, but doesn't the reflection of the side of the Thunderbolt Display look remarkably thinner than the current model?