I found this in an old catalog from 2001. I guess when they dropped to $5000, people thought they were getting a bargain! 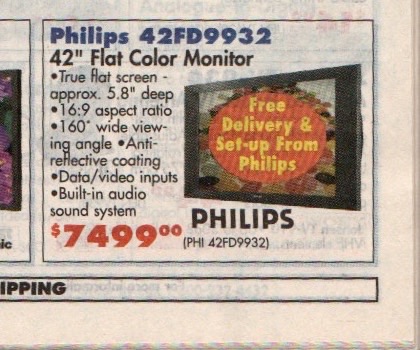 I remember my parents spent $5000+ on a Pioneer Plasma TV in 2002 or 2003. The thing had all these cooling fans in it. It was so loud and annoying. It lasted a few years and then the thing burnt out. What it waste.
L

I worked with a colleague who had spent around $30K on his TV. Would have been around 2000 or so. Can't remember anymore details other than cost. Back then, in the UK, very few people had flat screen TVs.

How are the blacks in the 4K sets? Honest question, haven't been following TV tech for quite some time now but always got the impression that Plasmas are the way to go re true black and color fidelity.

Sitting right next to it was a 50" JVC Rear Projection. We looked, studied, discussed, left, came back, looked again, and pretty much universally agreed that the rear projection had a better picture on it. The blacks were blacker, the whites were whiter, and everything generally was just much sharper and better. Granted, at that point CRTs were very mature and rear projection was had a good 25 or 30 years of mainstream use behind it too. After three trips-and talking to three different salesman-there was absolutely no argument we could make for buying the plasma over the $1500 rear projection. The space had already been "plotted out" for a rear projection, so the decision was pretty much a no-brainer.

That TV actually lasted until about 2008 or 2009, when it did legitimately die(it would turn off and not be able to be turned back on for another hour or so). It was replaced by a 50" LCD-which had become much less expensive in the time-and then more recently by a 55" LED.

Is this thread to lament the passing of Plasma TV?

I'm trying to remember why I never bought one, despite a superior image and refresh rate, I want to say they were relatively expensive, heavy(?), and delicate.
Last edited: Jun 11, 2015
Reactions: twietee

Lots of technology starts out with a very high price in the consumer market and eventually drop. One can get into the pros and cons of plasma but it has quite a huge following for those into that sort of stuff.

One need only look at the LCD screens for computers and the cost back when for say - a Dell 20" which ran about 900 dollars and didn't have the specs we see today for larger screens at less than half the price.

Btw, yes I am one of those that prefers a good plasma TV for 1080p playback over LCD/LED 1080p counterparts. - For all the right reasons. Plasmas didn't die out because they were inferior but rather they were cost prohibitive and were not going to do well in the upcoming 4K world.

Huntn said:
I'm trying to remember why I never bought one, despite a superior image and refresh rate, I want to say they were relatively expensive, heavy(?), and delicate.
Click to expand...

Yeah, price, LCD/LED became way more cost effective (think about the wide range of usage in LCD based tech). They're definitely heavier in equivalent sizes, though not an issue with, for example mounting (we have ours on a full adjustment/tilt, 27" drop system, wall mount).

There was also a bit of an urban legend about power consumption, but even at 2X-4X (depending on the LCD lighting tech), we're still talking in the $60-80 per _year_ territory. They also run a little hotter (as you might expect from the additional power consumption), but I've never noticed it contributing the room temp in any meaningful way. Our Panasonic, even with the additional heat is very quiet, so no fan issues when it comes to cooling.


phrehdd said:
Btw, yes I am one of those that prefers a good plasma TV for 1080p playback over LCD/LED 1080p counterparts. - For all the right reasons. Plasmas didn't die out because they were inferior but rather they were cost prohibitive and were not going to do well in the upcoming 4K world.
Click to expand...

I almost scored another one when they were clearing some of the new Panasonics out (through Amazon), just to store for future use, but figured that was kind of silly waste of money - plus, by the time ours is ready to replace, the current LCD based tech (or even OLE) will be excellent.

In fact, in the very near future, we're thinking of moving the Sony to the playroom, the Panasonic to the bedroom, tossing the Toshiba (currently in the playroom, it had a good run ), and replacing the main set downstairs with something non-Plasma.

My impression that anything that runs relatively coolly will have an advantage over similiar technology that runs hot.

I was referring to picture quality, not price.
Reactions: jpcarro

Hog Milanese said:
I was referring to picture quality, not price.
Click to expand...

A modern 4K TV has a 15 year old plasma beaten (soundly) for picture quality as well.

Not really. Resolution means very little in this case, especially considering the lack of content at 4K.
Reactions: phrehdd and D.T.

WOW! We've come a long way. Plasma tv's had great image quality but they're a dead technology now....oh well. 4K is pretty useless in it's current state until there's content for it. Until the cable/satellite manufacturers release 4k content (they don't even broadcast in full 1080p, usually 1080i and some 720P), game consoles in 4K (won't happen this generation) netflix, apple tv, etc, it isn't worth it. People are better off getting decked out 1080P sets or keeping their current set until 4k hits mainstream and prices drop and sets improve. Also I sit a good 9-10 feet away from my tv so my eyes can't discern a difference. TV's aren't smartphones, tablets, or computers as in we sit really close. So a 1080p screen to me at 10 feet is essentially retina for the fact that my eyes can't discern a difference. It's like looking at sand up close and seeing the individual grains but from a distance you can't. 4k is great on huge displays and if you sit really close you can tell but people that sit 4-5 feet away from a big display let alone any tv is a minority

placidity44 said:
People are better off getting decked out 1080P sets or keeping their current set until 4k hits mainstream and prices drop and sets improve.
Click to expand...

Yeah, I've always been an advocate of quality over quantity, even in regards to size. I have a BIL a few years ago that wound up buying a cheap, but large TV - I tried to convince him to go with the next size down, but two models up, but he got obsessed with the larger one.

I got a 2012 model Panasonic Plasma, which is a couple of years before they finally stopped making them. Mid-range model, the even more expensive model had pointless 3D. £500 on offer which was a bargain. Picture is stunning, I've not seen an LCD that gets near the responsiveness and motion quality. Hopefully it'll last for years.
Reactions: jpcarro
S

I bought a 42" Samsung 720p LCD TV back in 2007 for $1k. I just sold that TV this year for $250 (without a remote). And I felt like I was lucky to get that much out of it. It's insane how fast TV technology has progressed and how much sets have depreciated in such a short period of time.

Lots of reasons why plasma lost out, but I think the biggest one is that LED tv's are much brighter, especially in 'showroom' mode, and the brightest tv on the wall nearly always sells best. Go to a mass retailer today, and if there is a plasma on the wall, it will look dim and washed out in that environment. Never mind that at home in normal light, it will generally look much more natural, with smoother motion, better off-angle brightness, and better blacks. Bright sells. And when the brightest tv's are also thinner, lighter, and more power efficient, people will overlook picture quality that they can't really discern once they've made up their mind anyhow.
Reactions: jpcarro and D.T.
F

I have both plasma and LED Samsung TVs. Plasma is tuned for dim room movie mode and the picture is to die for. Rich color, smooth fast action, deep blacks, no color loss at extreme angle viewing.

The LED TV is bright and can survive being seen in a sunlit room. But the picture is harsh, blacks fill-in, action is jerky with motion blur, angle views get washed out and look pale.
Reactions: D.T. and Hog Milanese

Our tube TV went out a few years ago, I could not find anyone to fix it so I bought a Panasonic Plasma TV and luv it..No other came close in picture quality. I went to all the big box stores and looked at them. Yea I paid over 2K.
Reactions: jpcarro

FieldingMellish said:
I have both plasma and LED Samsung TVs. Plasma is tuned for dim room movie mode and the picture is to die for. Rich color, smooth fast action, deep blacks, no color loss at extreme angle viewing.

The LED TV is bright and can survive being seen in a sunlit room. But the picture is harsh, blacks fill-in, action is jerky with motion blur, angle views get washed out and look pale.
Click to expand...

Yeah, you are right on (and I should've made this point in my quick plasma vs. LCD comments above).

That's kind of a factor in wanting to shuffle sets around again. Put the plasma in the bedroom where it's darker, and mostly used in the evenings vs. the main TV room which has a good bit of light "facing" the set.
F