While most of the leaked information from the iOS 11 golden master has hinted at major features coming to the iPhone and Apple Watch, a few smaller tidbits have surfaced online today. One of these is the apparent confirmation that PlayStation Vue will support Apple's Single Sign-On feature once the software update launches to the public later in September. This suggests Single Sign-On will also arrive on the PS Vue Apple TV app for tvOS 11. 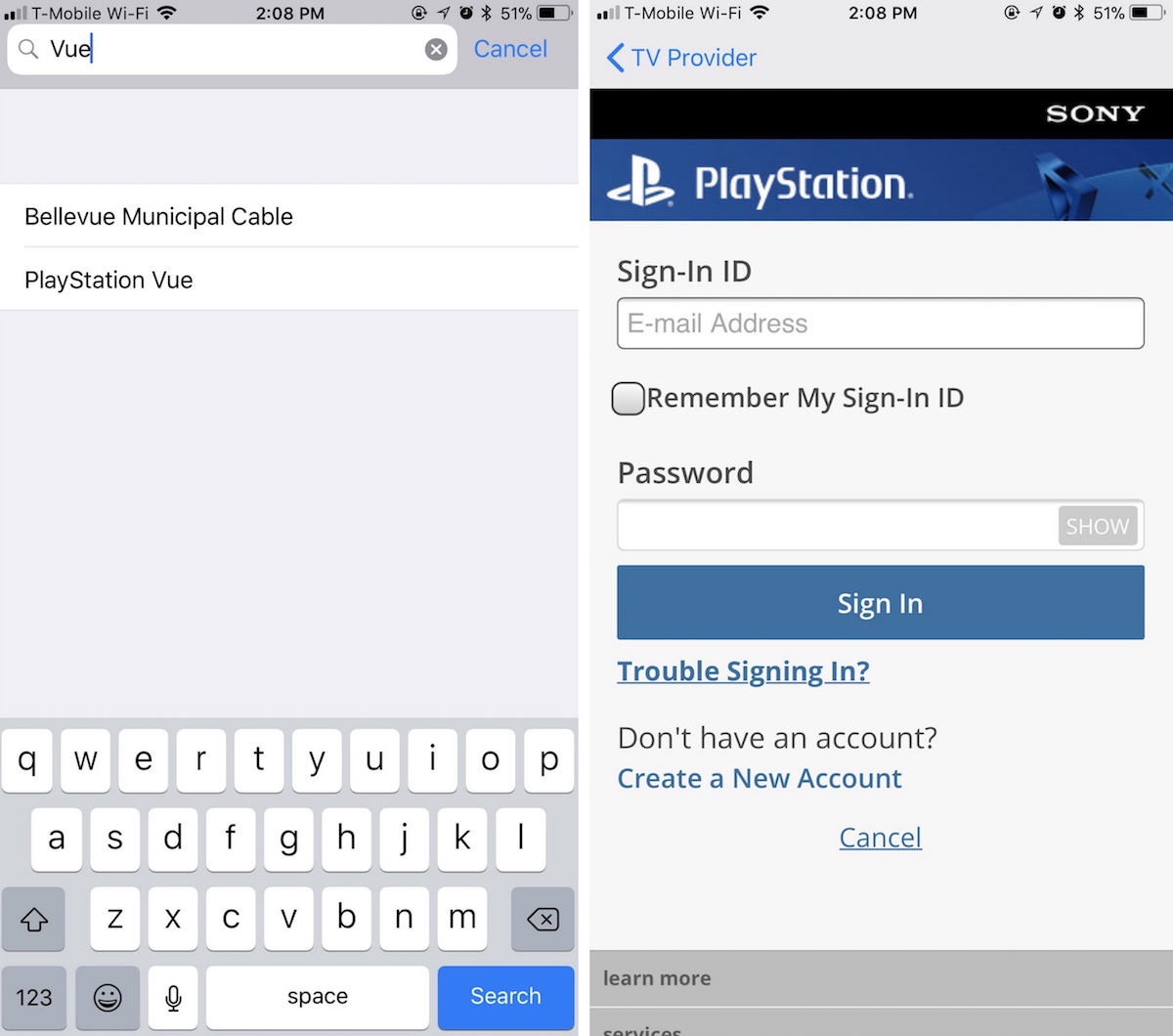 Discovered and shared by Daniel Yount on Twitter, Yount mentioned noticing Single Sign-On support coming to both PS Vue and YouTube, but in our testing it appears that YouTube still requires the user's password to sign into individual apps. It is recognized as a provider in search, however, suggesting full YouTube support for the feature could be coming in iOS 11 as well.

It seems to be live now regardless of iOS. I am still on iOS 10 and was able to sign in. It is also an option on my Apple TV now as well.

It is also needed in the US!
Reactions: smarch

Any chance this could come to Plex?

I have been able to login to SSO with PS Vue on my iOS 11 devices running public beta 9 as well as my Apple TV which is running tvOS 10 since yesterday.

I am still surprised Optimum is not supporting SSO (least last I checked, now if I want to check I have to log out of PS Vue). They are usually the first to adapt this kind of stuff.
Last edited: Sep 9, 2017
R

still no DirecTV Now. Maybe they are waiting for their big redesign and update later this year before they roll out support.
Reactions: spazzcat and Capitalist_King

redking31591 said:
still no DirecTV Now. Maybe they are waiting for their big redesign and update later this year before they roll out support.
Click to expand...

jacjustjac said:
Any chance this could come to Plex?
Click to expand...

As far as I know, Plex does not offer a TV service like other TV providers. They have Plex live TV, but you retrieve your own content via Antenna that you plug into your computer.

There are still some notable channels missing from SSO in addition to providers. Like Turner (TNT/TBS/truTV) and AMC Networks (AMC/IFC/BBC America). At least there will be a lot less logging in for me now, so I am happy.
Reactions: trip1ex

Yeah it isn't just providers but apps. Even without SSO you can't use some apps with some providers.

It seemed to me that the satellite companies (not their streaming services) supported more apps than other providers.

And the 500 providers means nothing given the top 5 probably represent 80+% of customers in the US and none of them support SSO
Reactions: Max E Verde
P

2nd that! They gave away free apple tvs when first signing on. You think they would have added support by now.
Reactions: Cameroncafe10a, Capitalist_King and webbuzz

They are the worst. The absolute worst.
Reactions: Jax44 and Opieap13

Am I the only one upset to see that Charter/Spectrum/Time Warner (whichever name they are using today) is not on the list? I find that so frustrating!

redking31591 said:
still no DirecTV Now. Maybe they are waiting for their big redesign and update later this year before they roll out support.
Click to expand...

Seriously! This has bugged me incessantly that direct tv now is absent, when basically every other internet tv provider is there.
Reactions: avanpelt and Capitalist_King
2

They are the worst. The absolute worst.
Click to expand...

Not surprised as they consider themselves as a direct competitor of Apple. At one point Apple was in negotiations with Comcast to produce the hardware/software. But later found out Comcast was creating their own while negotiating was going on.

They are the worst. The absolute worst.
Click to expand...

There are many people in the US that agree with you.
Except this guy:

mmm1345 said:
I love my cable company - Xfinity. I get access to all the channels plus 3 premium channels and their associated apps (although for some annoying reason Starz app won't work) on most of my devices. I get 175 unlimited internet speed all for only $130 a month. People just need to negotiate with their providers. If I went internet only my service would be $80 a month, so in reality I'm only paying $50 a month for hundreds of channels and the programming I like. Chord cutting is for people who don't like TV to begin with and only watch one or two things so it's absolutely stupid Cable Companies and networks are trying to cater to the loudest voices who don't like their products to begin with instead of catering to those of us who do.
Click to expand...

I personally think his last sentence is just silly.

2010mini said:
Not surprised as they consider themselves as a direct competitor of Apple. At one point Apple was in negotiations with Comcast to produce the hardware/software. But later found out Comcast was creating their own while negotiating was going on.
Click to expand...

I remember the rumor too, although I don't think it was a secret that Comcast was working on their X1 OS.

I think Apple wanted their ATV4 to be an additional option for people to subscribe to Comcast, even if they did not have Comcast available in their location. IIRC, it was rumored that it would have been an app type solution designed by Apple, but with content provided by Comcast.

Negotiations failed due to Comcast not wanting the ATV becoming a competitor for Comcast's X1. As a consumer, I think this sucks, but I understand Comcast's POV. They could potentially lose out on a crap load of rental revenue, all while having to give Apple a cut of their subscription revenue.
L

DIRECTV Now is a single sign on provider, the list was in correct. I am using OS 11 on all devices and use DIRECTV Now and have them as my TV PROVIDER...
M

Next to my Mac.

Well, Cox Communications isn't listed. Cox is so outdated.
A

lenard said:
DIRECTV Now is a single sign on provider, the list was in correct. I am using OS 11 on all devices and use DIRECTV Now and have them as my TV PROVIDER...
Click to expand...

I just randomly noticed this week DIRECTV Now is available as well.
A