I'd like push notifications to Mojave when new MacRumors.com articles appear. I can't get this to work! Everything looks setup right? 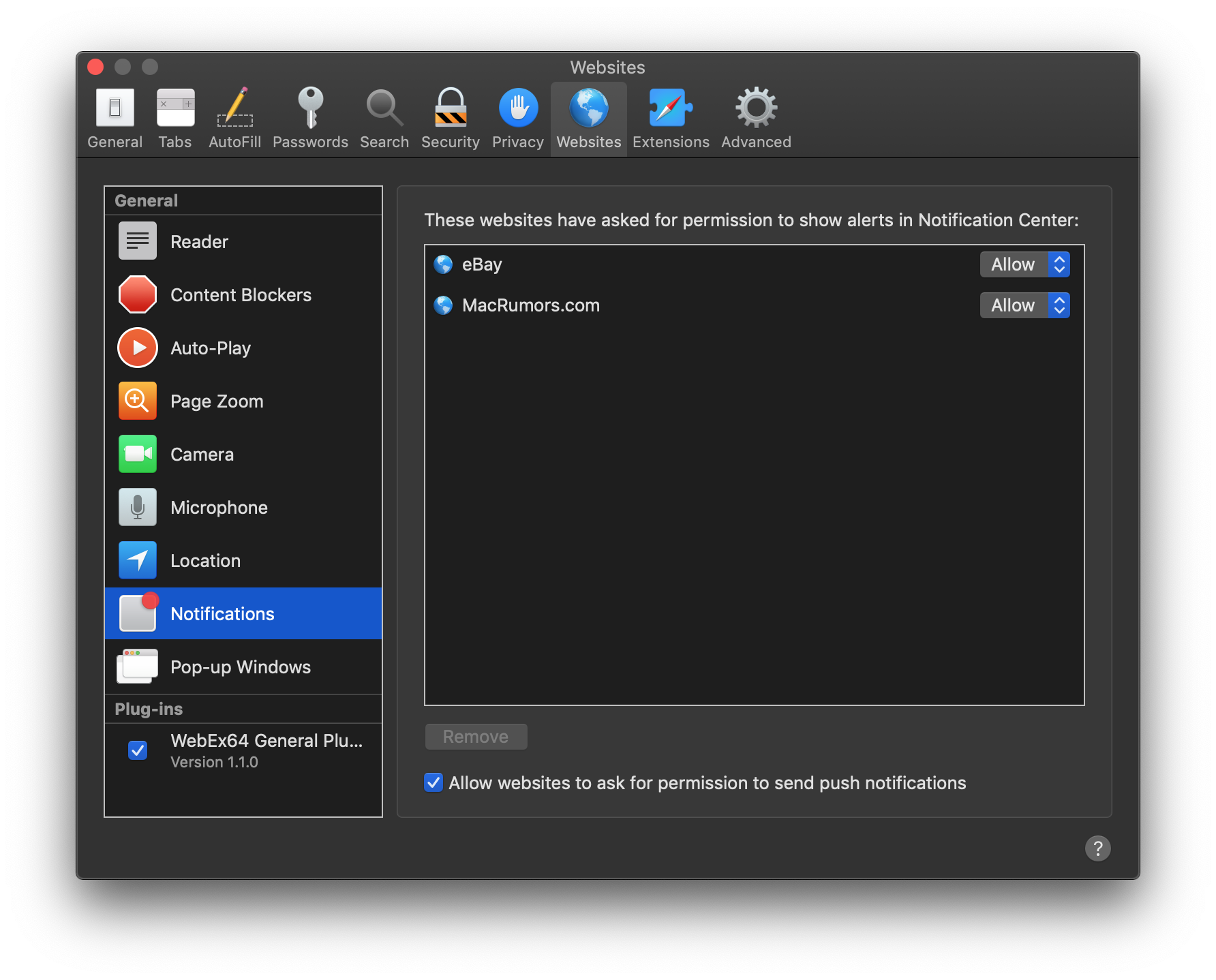 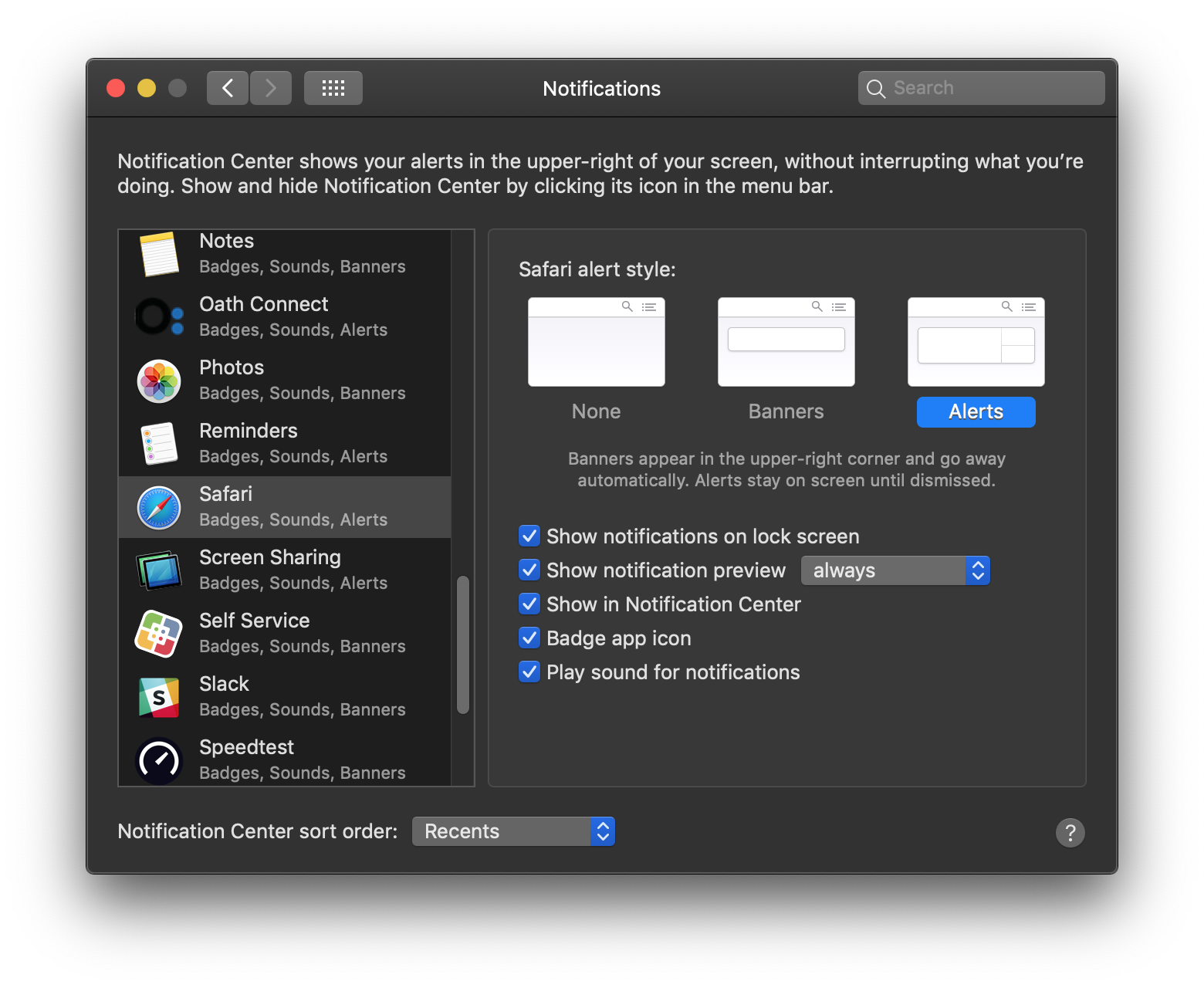 They don't appear to be working right now. Looking into it.
Reactions: djc6
Comment

Thanks, its working better now.

I see the articles in my notification center; but for some reason not appearing as alerts even tho I have it configured as such. This sounds more like a Mojave issue. My calendar is using alerts - they appear until I dismiss them. But the macrumors articles are just listed in notification center when I open it.
Comment

I am having this issue. The forum isn't requesting push notification from Safari.
Comment
M

hey guys, this is the newest thread I could find on here. I've had to clean my iMac a few times due to recent issues, and again I'm not being asked if I want push from MacRumors. (Clean install). As mentioned above I checked that safari can access location services, and it is allowed. Also have checked preferences in safari, and there is no entry for MacRumors under notifications. Also, going to re-subscribe now does nothing as far as bringing up a prompt. Also to note, my older MBP does not work either. I used it as a test. Has MacRumors given up on maintaining push? it seems to break all the time. Just wondering what's up. Thanks.

EDIT: forgot to mention, I'm running Mojave 10.14.5
EDIT 2: I just checked the 9to5 sites, Mac, and Google, and they don't ask to allow push either. Did apple change something in Mojave, or has this feature just been retired? The 9to5 sites always worked, even if MacRumors didn't.
Last edited: Jun 6, 2019
Comment

It does look there's an issue with push notification signups. We're looking into it.
Comment
M

WildCowboy said:
It does look there's an issue with push notification signups. We're looking into it.
Click to expand...

Thank you for looking into this. As I mentioned in my above post: NONE of the sites that used to off push through safari ask anymore, not just MacRumors. I was starting to wonder if Apple had discontinued the feature, or if they changed something that broke all existing sites. Again thanks for looking into this.
Comment
M

I was just checking back to see if anything has improved with push notifications and Safari. As I mentioned, as of Mojave, none of the Mac News Sites offer me push anymore. When I tested in a Mavericks VM, the sites (including MacRumors) asked if I wanted push. When I say as of Mojave, things worked when Mojave was initially released, however in later versions (10.14.5) currently running OS on both a 27" iMac, late 2015, and a 13" MBP late 2013, MacRumors, the 9to5 sites, apple insider, etc don't even ask if I want push anymore. That's why I asked if the feature was discontinued going forward, I haven't heard any formal announcements, or if there were any, I've missed them. Anyway thanks again, just keeping tabs on the situation.
Reactions: Codeigniter
Comment

Yup wondering that as well many tech websites including macrumors no longer show push notifications, I’m not even getting the pop out that asks for permission :/
Comment
M

Liiv said:
Yup wondering that as well many tech websites including macrumors no longer show push notifications, I’m not even getting the pop out that asks for permission :/
Click to expand...

Well, I've become very frustrated with Apple, and it's community over the last few years. Between decisions apple has made as a company, and then features not working when I want to use the, (even if I don't use them often) have really made question sticking with Apple for computers. I'm ok with devices such as iOS, and the Apple TV, but for computers, I have become uncertain I can continue to depend on Apple.

There are things I still like, and I also understand the reasoning for some of the changes. I just have the mind that if the things that attracted me to Apple initially are either not reliable now, or discontinued, what reason do I have to continue using their computers and macOS. I've been using Apple products since the 80's so I have quite a bit of history with the company via different stages: so I've been through many of their successes and failures. Anyway, if anyone has any updated info on this particular problem please let us know.

This should be corrected now. Please visit the push notification page by clicking on the icon in the upper-right of any page:

chrberni said:
This should be corrected now. Please visit the push notification page by clicking on the icon in the upper-right of any page:
View attachment 847417
Click to expand...

same here, was finally granted permission to accept notifications, and they show up in the website preferences as allowed from this site. Thanks again!
Comment
M

Hey guys, just giving a quick shout out that push seems to be broken again. They have been working reliably all along, then after the Catalina upgrade, they became intermittent. However, I was able to delete the entry for macrumors and they'd start working again. Today. I tried to do the same, and this time was no longer presented the dialog to allow notifications. I have cleared the MacRumors site data from Safari, cookies, cache, etc under manage website data, and deleted macrumors. Restarted still nothing. Also tried on another Mac running High Sierra with safari 13.0.3, and still nothing on that box. Just wanted to make someone aware it's happened again. Thanks again
Comment

Thanks for the confirmation, Just doing my usual troubleshooting routine to rule out nothing on my end. I'll just wait to hear any updated info. Thanks again.
Comment
D

At this point it might save a lot of future issues for macrumors to create a stand alone app to manage the notifications feature vs relying on Safari. Either that, or just discontinue it all together.. It seems like all the other sites that adopted the feature when Mavericks was introduced no longer work in later versions of macOS. If an app isn't possible, at this point, I would much rather have the feature discontinued, rather then always being broken. That way I won't be expecting it to work if it's gone.
Comment

So we are actively testing a solution. It will require resubscribing... but it's also handled by a 3rd party so won't break nearly as often.

arn said:
So we are actively testing a solution. It will require resubscribing... but it's also handled by a 3rd party so won't break nearly as often.

So far I wasn't asked to receive push notifications when clicking re subscribe. I have completely removed macrumors from notifications, so I'm not currently subscribed. Will try refreshing the subscribe page
Comment

MacinMan said:
So far I wasn't asked to receive push notifications when clicking re subscribe. I have completely removed macrumors from notifications, so I'm not currently subscribed. Will try refreshing the subscribe page
Click to expand...

Ya, that's still broken. I should have said we are privately testing. . Once it's working well, we'll let u know
Comment
M

arn said:
Ya, that's still broken. I should have said we are privately testing. . Once it's working well, we'll let u know
Click to expand...

Not a problem, I also connected the MacRumors skill to Alexa so I do have an alternative while I wait for notifications. if I just want quick info.
Comment

Is there a reason why new threads - which I am not following - are appearing in my alerts?