Unconfirmed photos of what is alleged to be the packaging for the iPhone 5S have been released by Chinese site C Technology [Google Translation]. The photographs depict a standard white iPhone box, similar to the boxes Apple has used as packaging for previous versions of the iPhone. 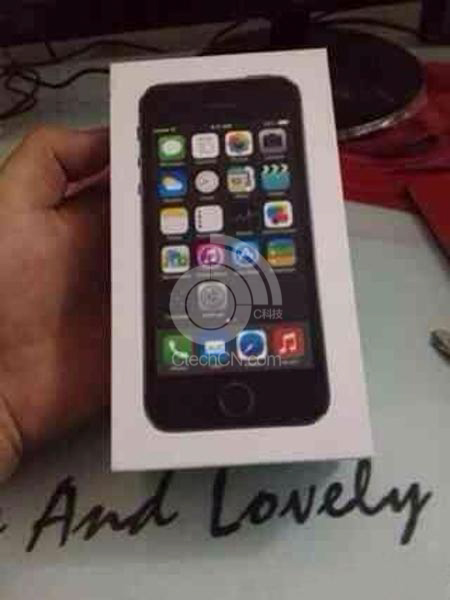 A black iPhone is printed on the top of the box and the phone's home button is surrounded by a new silver ring and pictured without the iconic square in the middle. The design is in line with rumors suggesting the iPhone 5S home button will be slightly altered in order to accommodate an expected fingerprint sensor, but there is no way to confirm the veracity of the images.

The solid black background on the phone is suspect as Apple typically uses a wallpaper for a background, but leaked images of purported iPhone 5C packaging have also shown a solid colored background.

While KGI Securities analyst Ming-Chi Kuo has indicated the iPhone 5S will feature a sapphire-covered convex home button to support the fingerprint sensor, other reports have disagreed with this conclusion, with 9to5Mac suggesting a non-distinct design for the home button that might possibly contain a shinier border as seen in the photo. 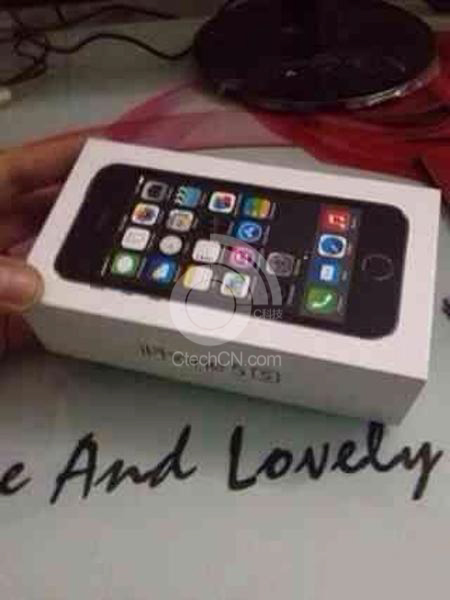 Apple will unveil the iPhone 5S and the iPhone 5C during an iPhone event next Tuesday. In addition to a fingerprint sensor, the iPhone 5S is expected to have an upgraded processor, an improved camera, and a new "champagne" color option.

Update: C Technology has now posted higher-quality versions of the original two photos, as well as two additional photos of the box. 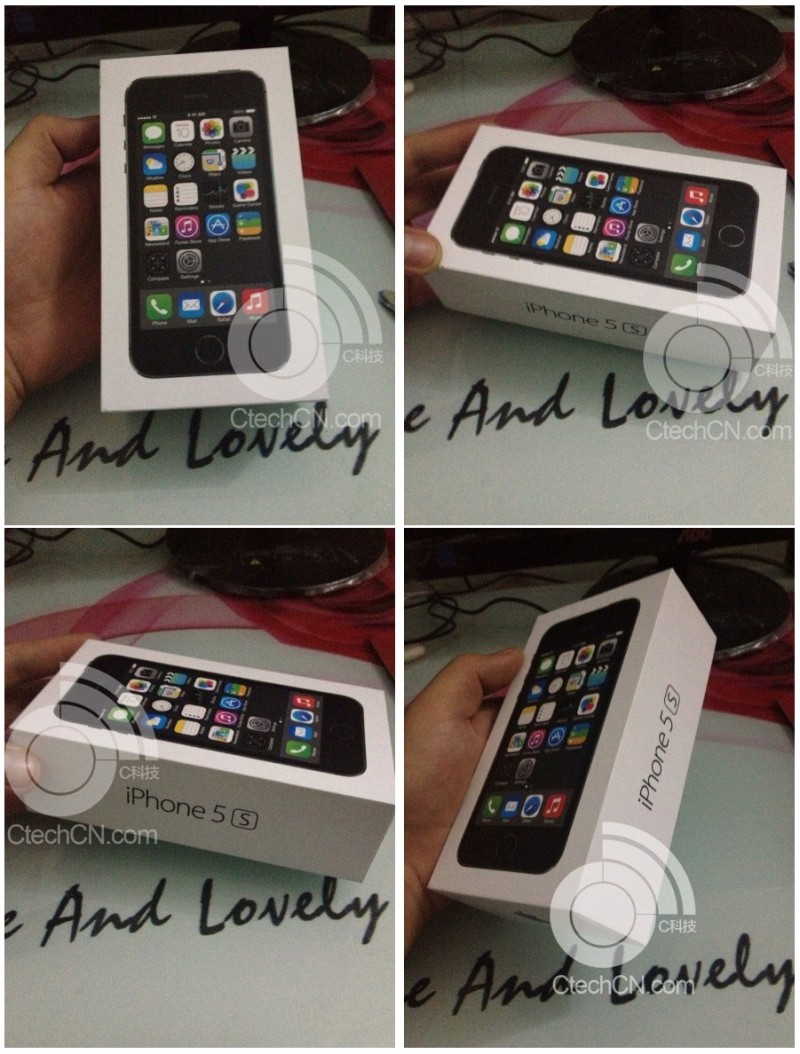 Black default wallpaper looks better than the star mess but I imagine it wouldn't show off the parallax effect as well.

Previous iPhone box packaging has never had an image of the phone on the box.
C

I'm going to go with fake. Usually Apple shows off one of the new wallpaper backgrounds. In this photo it just has a black background.

Of course, the most useful picture of such a box would be the back, which we can't see

They have. The first generation iPhone, iPhone 3G and iPhone 3GS did, for example.
With iPhone 4 and 4S, they wen't for a top angle view. With iPhone 5, they showed off the thin-ness with a profile shot.
Last edited: Sep 6, 2013

The phone pictured on the box?

The gray ring around the Home button?

I would have to say Fake because:

- Why would they use a black background rather than the colour dynamic wallpaper they have been using in all the iOS 7 promo material?

- Why use a head-on shot when lately (iphone 4 and up) they have used angle shots to show the hardware?

The veracity of these photos will be known soon enough.
O

The iPhone 5C cases seem to have the iPhone home screen depicted with a solid colour background that matches the phone/shell colour. This picture does the same by showing the black iPhone with a solid black background. But I wouldn't conclude that Apple would show a matching background on the iPhone 5S's as well. I do thin they will have separate style boxes, though, one plastic, one cardboard. We'll see.

I love the way that (based on leak so far) Apple seems to be shipping iOS 7 devices with hardware-color-matching home screen wallpapers.
K

Well it is a very blurry photo, thats always a good sign.

just wait until its released

could the grey rings on the invite be a clue to the new home button?

Please tell me you're joking.

The phone pictured on the box?

The gray ring around the Home button?
Click to expand...

I considered the unequal distribution of elements on the iPhone 5 bottom as extremely ugly. This home button + halo effect is definitely killing the beauty of the (original) design.

Why don't people in these situations ever have a decent camera?!
4