A new report out of Japanese Apple blog Mac Otakara [Google Translate] suggests that a refresh of the iPad Mini line could be hitting mid-cycle, bringing a beefier processor and faster Wi-Fi to a fourth-generation iPad mini. 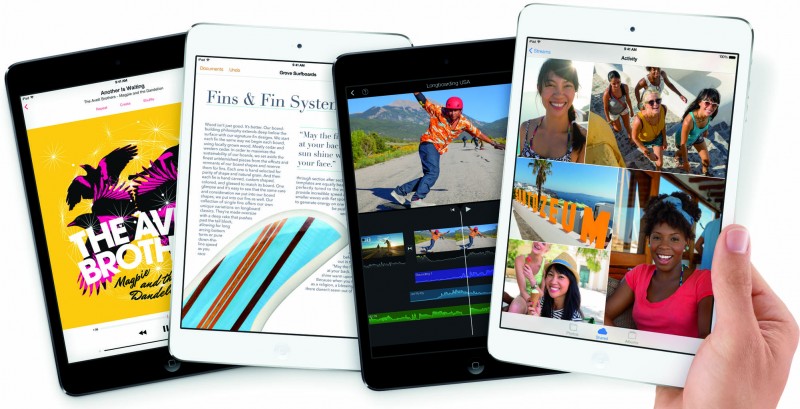 Considering that the iPad Mini 3 was only a slight refresh on its predecessor, packing the same processing speed and power and essentially adding only Touch ID and a gold color option into the mix, many have hoped the fourth generation version of the device would be a more substantial update than last year's. Mac Otakara's report states that the update would replace the iPad Mini 3's current A7 processor and 802.11n Wi-Fi with an A8 CPU and 802.11ac Wi-Fi.

Mac Otakara tells MacRumors, however, that there is some uncertainty with this rumor, and Mac Otakara is not convinced it is accurate.

A short product cycle for an iPad would not be unprecedented, as the 9.7-inch iPad saw a seven-month interval in its third-generation, with the fourth-generation model shifting the iPad update cycle from the early part of the year to the late part and allowing Apple to quickly make the transition to the Lightning connector across its iOS device lineup.

Timing on a potential mid-cycle refresh for the iPad mini is not entirely clear, but the obvious candidate in the near-term is Apple's "Spring Forward" event this coming Monday, March 9. Mac Otakara also says Apple has been pushing out iPad and notebook shipping estimates for resellers to 2-3 weeks, perhaps hinting at some imminent lineup changes.

Apple reportedly has a MacBook Air refresh in the works and shipping estimates for the 13-inch Retina MacBook Pro have also slipped today, fueling rumors of updates at Monday's event. The company will, however, most likely dedicate much of the show to details on the Apple Watch, so it is unclear how many other updates Apple will want to include in the event.

A new version of the mini with a full colour gamut would be nice.
Comment
T

I think this may well be another thing for Monday. The Mac and iPad updates wouldn't take longer than 45 mins to go though, leaving a long time to talk about the watch.
Comment
I

I sort of understand why Apple were quick to come out with an iPad 4, which although still did create a significant amount of backlash since not even a year had passed. But if Apple actually does release this next week then I would consider it a bit of a rip-off/disappointment seeing as how little time has passed since the mini 3 was released. Not to mention that it was an incredibly lackluster iPad which basically had no updates (expect Touch ID).

And while I understand that those who've bought an iPad Mini 3 won't have a product that immediately deteriorates if this is announced, I would certainly understand their frustration.
Comment

I would like this as I've been thinking about getting a new iPad sometime and I'd like to try a mini. Although if they mark it down enough I'd probably just get a 3rd gen mini once this is out.
Comment
P

Not worth it with the A8, it has to be at least A8X.
Comment
W


Imory said:
I sort of understand why Apple were quick to come out with an iPad 4, which although still did create a significant amount of backlash since not even a year had passed.
Click to expand...

Anybody with a lick of sense would have realized just how minor the last update was. As such it is not unreasonable to expect an out of cycle update.

But if Apple actually does release this next week then I would consider it a bit of a rip-off/disappointment seeing as how little time has passed since the mini 3 was released.
Click to expand...

Consider what you may but do realize that if you take this attitude people will hold you in low regard.

Not to mention that it was an incredibly lackluster iPad which basically had no updates (expect Touch ID).
Click to expand...

That is in effect the whole point, if as a person you knew this why would you consider buying the device?

And while I understand that those who've bought an iPad Mini 3 won't have a product that immediately deteriorates if this is announced, I would certainly understand their frustration.
Click to expand...

.AC for the win

I'd buy it for the .ac wireless. I don't care as much about the processor. The A7 is fine for my use. But in my home, my ipad mini 2 vs my iphone 6+ is about half the speed because of the .ac
Comment
W

While I kinda doubt it, I tend to agree that an A8X would be the better processor to put into this device. Who knows maybe we will get lucky, but this tablet needs more than the lowest end cell phone processor Apple has. As it is I wouldn't be surprised if the lack luster update last year was the result of constrained production. Let's face it Apple shipped a lot of ARM processors last year they could very well be crimping production capacity.
Comment

They didn't put ac wifi in the iPad mini 3? Jeez I thought they at least woulda done that.
Comment

Yeah, as much as I love Touch ID, and I predicted when I bought our Retina that the next year they would put Touch ID on it, no bump in performance meant we had no reason to upgrade. Nor did the other two in our extended family.
Comment
H

Same anti reflective screen and color gamut as the Air 2. Or no deal... not for me. Not for many people I know with some understanding of tech...
Comment

Not going to happen soon although the upgrade will most likely happen this fall.
Comment
C

I was suspecting/hoping for a spring 2015 iPad Mini refresh since the iPad Mini 3 was very much a stop-gap update. The holdup was probably A8 availability and 20 nm production limits since Apple was the first major adopter of the then new process. An A8X is unlikely given the higher thermal requirements and the requirement for external off-package RAM which the iPad Mini doesn't have room for.

If Apple still intends to do a fall 2015 iPad Mini 5, I guess full sRGB gamut screen and the adoption of the iPad Air 2's 8 MP camera could be saved for that.
Comment

Whether the iPad mini gets updated now or later.

Will it get slimmed down to match ge iPad air 2. Or would that leave to small of a battery for the mini?

Regardless of this thing gets an A8, we will be seeing an A9 iPad mini this fall, right?
Comment
C

Can someone explain to me why Apple has still not yet released and iPod touch with a 3G option?
Comment
C

Thanks for reconfirming that iPad mini 3 was a epic failure.
Comment

cameronjpu said:
Can someone explain to me why Apple has still not yet released and iPod touch with a 3G option?
Click to expand...

wizard said:
Consider what you may but do realize that if you take this attitude people will hold you in low regard.
Click to expand...

Hold me in low regard? And why is that exactly when the iPad Mini 3 is almost unanimously considered to be a disappointment? I'm well aware of the fact that technology evolves and the tick-tock phase usually results in a new revision each year, but the way Apple deliberately nerfed the mini 3 to later on in a matter of a few months release what arguably should've been the mini 3 to begin with, is what would make people hold me in low regard? Quite the statement to assume people would, but I can't argue if you somehow do.

In this case, I don't think so. The A8, and ac-wifi has been available for quite some time in their respective lineups.


wizard said:
That is in effect the whole point, if as a person you knew this why would you consider buying the device?
Click to expand...

I'm not talking about myself. I never bought the device because I saw no point buying it. This is not about me.
Comment
N

I seriously doubt this is happening any time soon.
Comment

Bring it on. My 1st gen is driving me crazy. Would love to get a new one with Touch ID and the A8. Will be nice for Pixelmator, and then not having to type my password all the time to get to my other passwords in 1Password.
Comment

As I cracked the screen of my Mini 2 last weekend and Apple told me they won't fix it and would instead charge £200 for a replacement, this would be nearly perfect timing if true.