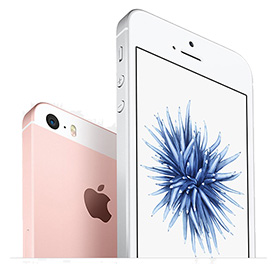 A questionable rumor has surfaced today suggesting Apple could unveil a new iPhone SE next month, but it might just be more noise in iPhone silly season.

The rumor comes from French-language blog iGeneration, which cited an unnamed source claiming Apple will hold a product event in late August to introduce an updated version of the 4-inch smartphone.

Mickaël Bazoge, the author of the article, told MacRumors that he received the info from a "new source" with an unproven track record. He expressed some skepticism, but added that the source "seems reliable."

The timeline is immediately questionable given Apple has never introduced any new iPhone model in August. Beyond the current iPhone SE and iPhone 4s in March 2016 and October 2011 respectively, Apple has officially debuted all other iPhone models at events in June or September each year.

Moreover, given the current iPhone SE essentially has iPhone 6s tech specs, the next model's tech specs would likely be closer to the iPhone 7. And if that happens in August, then the new iPhone SE would be nearly as powerful as the iPhone 7 with a much cheaper price tag, potentially cannibalizing Apple's sales.

There have also been few if any rumors about a new iPhone SE. Back in November 2016, KGI Securities analyst Ming-Chi Kuo said it was unlikely that Apple would release a new iPhone SE in the first half of this year. That claim proved to be accurate, but Kuo hasn't outlined any new predictions since then.

When introducing the iPhone SE, Apple acknowledged that some people simply love smaller phones, and revealed that it sold 30 million 4-inch iPhones in 2015. The device looks like an iPhone 5s, but it has newer tech specs, including a twice-as-fast A9 chip and a 12-megapixel rear-facing camera.

iPhone SE remains Apple's cheapest smartphone, starting at $399 in the United States. Today's rumor claims the next-generation model could start at EUR399 in Europe, down from EUR489 currently. The rumor also says Apple will hold a second event in October to introduce the supposedly delayed "iPhone 8."

Apple doubled the current iPhone SE's storage capacities to 32GB and 128GB, up from 16GB and 64GB, in March.

Because 2 events in less than 4 weeks would totally make sense
Reactions: vlad_djkax, Breaking Good, xalea and 5 others
Comment

This just a couple days after the story was they have no plans to update the SE any time soon?
Reactions: Shlooky, geoff5093, Breaking Good and 2 others
Comment

I love my SE far more than than any other iPhone. Will buy this update without any question if it comes with same dimensions.
Reactions: BoneCollector, emdub, jeffreyg and 22 others
Comment

I love my iPhone SE too! It would be nice to see a refresh or possibly a redesign this year.
Reactions: jeffreyg, B4U, Val-kyrie and 7 others
Comment
T

If they add 3D touch and OIS I would seriously consider it.
Reactions: Val-kyrie, rasputin1969, JGIGS and 3 others
Comment
J

Wowereit said:
Because 2 events in less than 4 weeks would totally make sense
Click to expand...

Who says Apple would have an event for updated SE? Just announce it's available for sale.
Reactions: Wayfarer, terrapinjess, LizKat and 6 others
Comment

An iPhone SE with 4~4.5 inch screen in a design similar to iPhone 8 (ie, no useless bezels on top and bottom) will be the ultimate dream come true!!

Ofcourse, I wont be holding my breath for that though.
Reactions: saba01, Bako-MacAddict, jeffreyg and 16 others
Comment
Y

I LOVE the SE form factor. If they simply update the internals, I would continue to buy this phone for the next decade.
Reactions: falcn, emdub, Cameroncafe10a and 28 others
Comment
C

I want to go this route. I'm stuck in an annual upgrade program. If I want the SE I have to completely pay off my 7. Dumb. They only let you upgrade to the "latest and greatest" on the annual program. Verizon that is.
Comment
U

SE has been extremely popular. Would take this rumor to the bank. If the 8 is as constrained as it seems they will need something to sell. Spec bumping the SE is very low hanging fruit.
Reactions: B4U, tk421, Val-kyrie and 8 others
Comment
A

Sunny1990 said:
I love my SE far more than than any other iPhone. Will buy this update without any question if it comes with same dimensions.
Click to expand...

Same. I have the 7 because Verizon practically gave it to me for free. I want to go to a smaller screen and the form factor.
Reactions: FrenchRoasted, CreatorCode and Sunny1990
Comment

an SE2 with maybe a 4.3 inch screen with the 4.7 inch resolution would be good.
Comment
J

Wowereit said:
Because 2 events in less than 4 weeks would totally make sense
Click to expand...

that's not what the article says - an SE launch in August and another in October - could be as long as nearly three months depending on days.
Reactions: december
Comment

ImNoSuperMan said:
An iPhone SE with 4~4.5 inch screen in a design similar to iPhone 8 (ie, no useless bezels on top and bottom) will be the ultimate dream come true!!

Of course, I wont be holding my breath for that though.
Click to expand...

I've always been in the fortunate position to buy the top level iPhone in terms of spec and storage, but the rumoured body size of the iPhone X would really be the absolute maximum for me. Combine that with the added rumours that they might be dramatically increasing the top pricing tier for the first time in the iPhone's history.

With this in mind, if they were to introduce a full screen SE with the same sized body that it has now, I might be tempted.

There's already a decent number of people that love the SE (including my Mum), so if they add others like me into the mix it'll sell in volume.

That won't go down well with the bean counters though in profitability terms.

Then again, thinking out loud here, someone in my position who has never considered the AirPods, for example, might now be more inclined to purchase those at the same time. I'm sure they make a tidy profit for Apple too and the more Apple products people buy, the more it ties them to the Apple ecosystem.
Last edited: Nov 28, 2017
Reactions: chrisbru
Comment

If it has the same size and case design, with a bigger screen with minimal bezel all around, I want it!
Reactions: gnasher729, lisztomania7, S G and 2 others
Comment
B

About time they introduce the SEs. This will happen because the event for the 7s and 8 will take place third week of November.
Comment

iPhone! iPhone! iPhone! iPhone! lol I'm more than ready for an upgrade. Holding out for the Edition version. Sounds like they will have 7s as an iteration of the current 7 and then an all glass front iPhone (hopefully called Edition).
Comment

I'm happy with my original SE. I sometimes think I'd like to see water resistance, but that would probably add bulk and cost which would change what the SE is all about. I think adding more storage was a nice upgrade already.

They certainly did a smart thing making the SE. They should keep it going because the people who want big phones will not be pulled away. The SE gives people who want or need small phones and more affordable phones a viable option.
Reactions: Denmac1, jeffreyg, LizKat and 5 others
Comment