I wanted to increase the RAM to 32GB, so instead of buying the RAM from Apple, I did some research, read the reviews and bought 2 x this from Amazon:-

Before I'd even switched on the iMac, I took out the pre-installed 8GB of RAM and replaced it with the new memory, ensuring that the RAM was properly inserted into the slots. However, when I turned on the mac, it never switched on, it just started to beep.

This went on for about a minute or so before I realised that it wasn't right so I went online to find out what it could be. Im not exactly sure on the amount of time between beeps but I found out it was either:-

I took out the plug, took the back off to check the RAM was in position, tried to reboot and it did the same. I tried moving the RAM around, the same, I tried using two RAM cards instead of 4 but to no avail, beep.......beep. What was meant to be exciting times, was turning out to be a disaster!

I then thought I would try to use the supplied RAM back in and hey presto, the mac surged into life!
So I then thought I'd try to put 2 x 8 GB RAM alongside the pre-installed RAM to see if this would work. The machine didn't even make the beeping noise! I took it out and it fired into life.......

This RAM I bought is supposed to work with this iMac, I've seen reviews on Amazon from customers who have bought the exact same memory for their Late 2015 iMacs and had no problems, hence me purchasing it. I have noticed on Apple's website they state the memory should be DDR3 which mine isn't, however on Kingston's website they state that DDR3L is fully compatible. 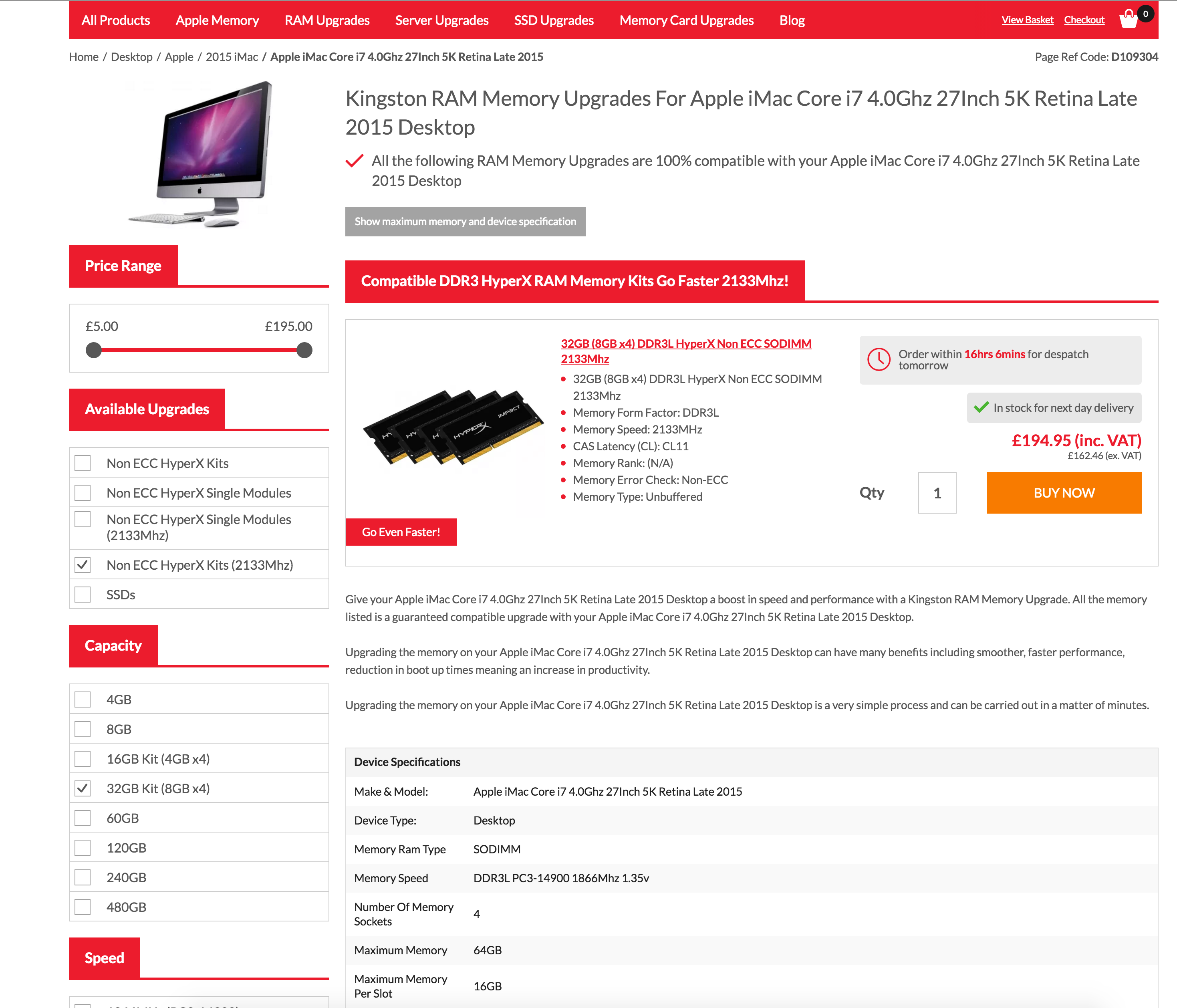 What do you think guys? Could it really be the case that all 4 x 8GB cards I've bought are faulty, do I have the wrong RAM or am I simply doing something wrong?

I just wanted to see if any of you guys have had any problems installing 3rd party RAM and take some much needed advice.

Two things: make sure you check each ram chip individually. They are usually sold in sets so make sure the serial numbers are incremental.

Second, sometimes amazon has vendors who sell non-genuine chips. They try to target specific stats so they are compatible. If they have chosen wrong, none of the chips will work when individually tested.

Trebuin said:
Two things: make sure you check each ram chip individually. They are usually sold in sets so make sure the serial numbers are incremental.

Second, sometimes amazon has vendors who sell non-genuine chips. They try to target specific stats so they are compatible. If they have chosen wrong, none of the chips will work when individually tested.
Click to expand...

So I've checked the RAM and yes they have been sold in sets, the serial numbers are incremental and the labels on the chips of each set of RAM say "Kit of 2". The vendor on Amazon is the actual manufacturer themselves (Kingston) so I also ruled this out.

I've taken the RAM into work today and gave it to the IT dept so they could check the RAM on the Macs here.
They tried both sets on a older Mac Mini and it worked no problem.

We then went on to the Apple website to see which RAM they officially supported. The only differences we saw was that the RAM I had was 2133MHz and the one Apple supports was 1867MHz. The RAM worked absolutely fine in a Mac Mini (which incidentally is a few years old) so would this make all the difference?
Last edited: May 4, 2016

You are beyond the specs of the ram, though it should down clock. Try the chips individually with your iMac and see if that makes a difference.

Trebuin said:
You are beyond the specs of the ram, though it should down clock. Try the chips individually with your iMac and see if that makes a difference.
Click to expand...

I ended up calling the manufacturer directly today and they said that they actually only have the 1867Mhz version of the HyperX Impact RAM listed as compatible with the iMac I have so I'm now returning this RAM and replacing it for the aforementioned. If this doesn't work then god knows what next!

According to what I've read in this thread the 2133 MHz RAM should work just fine in the late 2015 iMac. I'll soon find out for myself as I have some on the way.

I've just had a read of that thread and it seems like they do work fine. It looks like one (or possibly more) of the RAM chips I had were faulty. It still doesn't explain how they worked perfectly on an Mac Mini though??

I had a Mid 2007 20" iMac prior to this machine so the differences in speed is worlds apart anyway. There does seem to be a debate whether the 2133 chips are actually any better than the 1867 anyway but I've no doubt what I've now ordered will be absolutely fine, will easily do the job in hand, and save me £60 in the process!
Last edited: May 4, 2016
You must log in or register to reply here.
Share:
Facebook Twitter Reddit Email Share Link
Register on MacRumors! This sidebar will go away, and you'll see fewer ads.
Sign Up
Top Bottom