Apple has been ranked second, edged out slightly by Samsung in J.D. Power's latest U.S. tablet satisfaction study. Samsung scored 835 on a 1,000 point scale, while Apple was just behind at 833. Both companies got 5-star ratings from J.D. Power.

Apple has used J.D. Power rankings numerous times in its marketing surveys in the past.

The 2013 U.S. Tablet Satisfaction Study--Volume 2 is based on experiences evaluated by 3,375 tablet owners who have owned their current device for less than one year. The study was fielded between March and August 2013. The study measures satisfaction across five key factors (in order of importance): performance (26%); ease of operation (22%); styling and design (19%); features (17%); and cost (16%).
Click to expand... 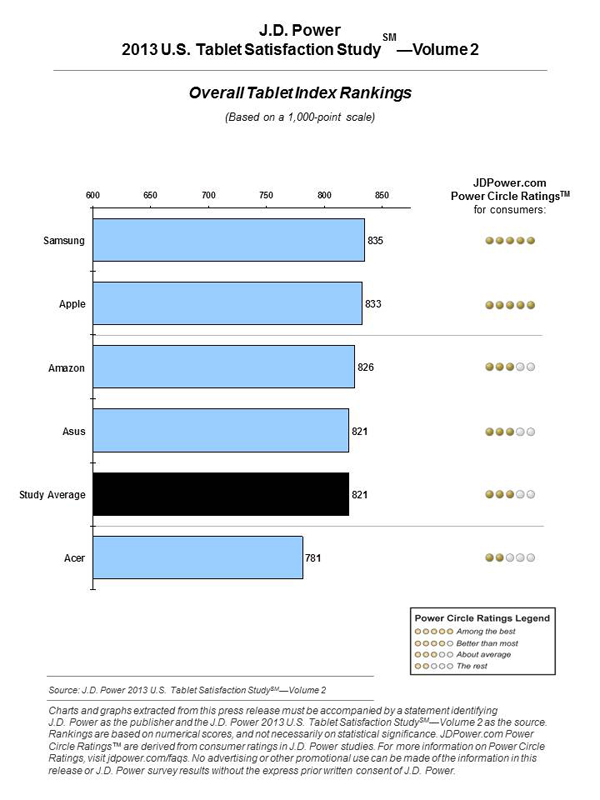 Apple is never going to beat Samsung on cost.

Which Samsung tablet?
B

Wait a minute this is Samsung, they probably manipulated the figures.
V

This isn't going to be nice .. Brace yourselves
M

Sammy probably payed them off too, just like those reviews.
S

Did they include Note 2 and 3 users in there

Which category does Build Quality fall into? Styling and Design?

Are people surveyed after actually using the product or only after making the purchase?
Last edited: Oct 31, 2013
J

Beaten by a whopping, mind blowing, jaw dropping, wait for it:

What about the latest tablet? Why is it always a game of comparing Samsung's latest model that came out a few weeks ago to Apple's year old model? Ease of use...is one thing but Amount of use should be another thing. People who buy Apple products use them. It isn't enough to check mark the tablet box on their list of things they are supposed to have. I'm satisfied with the device but I won't actually use it. HUH??? Surely amount of use should be factored in.
Last edited: Oct 31, 2013

Gist is that two companies do well on tablets. You're covered whether your OS preference is iOS or Android.

I've just switched to a Note 3 from an iPhone 5. Frankly, I can't believe I left it this long. I can't put it down. Still like the iPhone, but the screen on this is just astounding.
S

4chan must have rigged the results.

I seriously want to know which Samsung tablet. Is this the Note 2 and Note 3 phablet phones? Samsung does not even make the best Android tablets. Those are made by Asus (Nexus 7, Transformer series). Last year's Samsung Note 10.1 was panned by everybody (even Android websites). Samsung is still giving away their 8-inch tablets with TV purchases.

This is from JD Power so you count doubt the credibility, but I'd really like to know what tablet Samsung customers are using. There are maybe two people I know using a Samsung tablet.
A

NutsNGum said:
I've just switched to a Note 3 from an iPhone 5. Frankly, I can't believe I left it this long. I can't put it down. Still like the iPhone, but the screen on this is just astounding.
Click to expand...

I went to the zoo this morning! Then I had a cheeseburger and got the winter tires put on my car.

I bet it has to do with exchanging files and getting files on the iPad. Around me, that is one of the most frustrating factors for users.

On the other hand, I've never seen a Samsung tablet in the wild

It appears that Apple is suffering in the "cost" aspect here (where Samsung gained 25 points). This indicates that the recent growth in the tablet market at the low-end is cost-conscious. Even those who own an Apple iPad are probably asking why they had to pay so much when Amazon and Google are selling tablets for so cheap and Samsung is giving them away with the purchase of a Smart TV. Apple's iPad may be better, but you pay for better. Now with the iPad Air refresh and the iPad mini refresh we are likely to see Apple customers feeling like they are getting more for their money.
O

I'm sorry but that is pure ******** I've been trying to get a disabled person a tablet and had to get an Android one because of the lack of mouse input on the iPad (which is his only input option) So I tried the Samdung Tab 3 8" 4G because it had one of the newest Android versions where you could configure a home button on the screen (again to use with a mouse only).

Well, the mouse somehow stopped working after two seconds of inactivity because of a stupid error in the way the tablet handled USB power, the wifi version worked without problems (we tried it in the store) but the 4G (and otherwise identical) version didn't.

Well, we called Samsung Denmark support, when I told him the model number he was incredulous, he didn't believe me, and he couldn't find the model on his website (I kind of knew that because searching Samdung.dk for the model number came up empty) Long story short he was unable to help and promised to call back after checking with his superiors. Never called back.

We also took it back to the store and they also promised to call back "after checking with his guy at Samdung" he as well never called back, so we had to take the tablet back for a refund.

Meanwhile I was calling Apple support to exchange a faulty USB Apple charger and a pair of EarPods, well the service representative apparently did something goofy, because the support emails I got with info on how the repair/return was going had some funny foreign names instead of my own, I contacted support to let them know, and this extremely helpful, attentive and apologetic almost to a fault, said that she would monitor the situation, and call me back when I had returned the items (in the return UPS envelopes), lo and behold, when the faulty units were safely back in apples hands and I had gotten me a brand new pair of EarPods and a new charger, she called me and apologised for the weird error, and again assured me that everything was good.

Could you imagine a phone conversation with apple going like this: "Hello, thank you for calling Apple, my name is McIntosh how can I help you?" "Yes I have this iPad that doesn't work!" "Hold on there cowboy, did you say iPad? I'm afraid I don't know what you're talking about, can I have the model number on that bad boy?" "Model number I really don't know, it's an iPad! an iPad mini to be exact?" "iPad? are you sure? I'm afraid I can only find iPod and iPhone in our system, Sir are you sure the model number is iPad?" "Yes I'm god damn well sure it is!" "Well I can't find it so I'm afraid I can't help you" and so on...

(edit: I might have spelled Samdung wrong a couple of times, seems there's a problem with my "s" key wireless apple keyboard)
C

I consider myself a Android lover first even though I have a iPhone 5s. Not sure how Samsung beat Apple on this one? But then again I bought a refurbished Note 10.1 for $250. I think I answered my own question.
But I'm eagerly waiting to get a Nexus 5 with my 5s. Plan on making it my mini tablet. Not related to this article but today might be the day for the official nexus 5 release. It's nice not to be a one sided fanboi. I'm just like Woz!

bp1000 said:
Wait a minute this is Samsung, they probably manipulated the figures.
Click to expand...

Yeah, they gave all the people they knew were going to take the survey better quality versions of their tablets. Oh Samsung, very sneaky
T

I wonder how the rankings go among people who have owned and used both Samsung and Apple?

I know Android users who shrug as their phone runs dead at 4pm and say how much they LOVE Samsung and HATE how Apple "won't let you" do things with your tablet.... and then they fire up their tablet to do the only three things they ever do with it (all things that are better an iOS), while I go off to run all kinds of tablet apps they'll never have, and do things they wouldn't know how to begin on Android. Then they re-buy a new phone or tablet every year, burning more money than an iOS device that lasts, chasing the next Android fad. I'm appalled at what they'll put up with, but they simply don't know (won't let themselves believe?) that iOS is better in a lot of ways that would matter hugely to most users--if they knew.

And these people would certainly give high satisfaction scores to Samsung. Their standards are that much lower.
C

NutsNGum said:
I've just switched to a Note 3 from an iPhone 5. Frankly, I can't believe I left it this long. I can't put it down. Still like the iPhone, but the screen on this is just astounding.
Click to expand...

After kitkit drops you will wish you had a Nexus 5. Unless you like an older OS with that s-pen. Primary reason why I did not go from a Note 2 to a Note 3. I already know Samsung's strategy; release another new phone first and upgrade later. Not falling for it again.
K

The press release indicates that the Samsung tablets only topped the iPads by a very narrow margin (835 to 833). However, the overview of the categories seems to suggest that the iPad tops the Samsung tablets in almost every category, except costs. How do they explain this difference?