Today marks the seventh anniversary of the introduction of the iPhone, a presentation that took place as part of the keynote of Macworld Expo 2007 in San Francisco. While the device would not launch until over six months later, that presentation offered the public the first glimpse of what Steve Jobs introduced as three devices in one: a touchscreen iPod, a phone, and an Internet communicator.

Late last year, former Apple engineer Andy Grignon, who was in charge of the radios on the original iPhone, gave behind-the-scenes look at how Apple patched together demos for the introduction, with Steve Jobs showing off developmental devices full of buggy software and hardware issues. The iPhone team knew that everything had to go just right for the live iPhone demos to succeed, and they did, turning the smartphone industry on its head even as Apple continue to scramble to finish work on the iPhone.

Apple had actually been interested first in developing a tablet known as "Safari Pad", but as noted by a number of sources including Steve Jobs himself, the company shifted gears once it became clear how revolutionary the multi-touch interface developed for the tablet could be for a smartphone. Apple's tablet wouldn't surface until the launch of the iPad in 2010, three years after the introduction of the iPhone.

Seven years after the famous Macworld 2007 keynote, the iPhone has seen significant enhancements in every area, but the original iPhone remains recognizable as Apple has maintained the overall look of a sleek design with a larger touchscreen and a single round home button on the face of the device.

Indeed an awesome day! It changed the smartphone world!

One of the best presentations ever.
O

Steve Jobs at his finest.
P

Still brings me the same excitement to watch it as it did seven years ago.

Whether people like to admit it or not, iPhone truly changed mobile phones forever.

I've never watched this keynote in its entirety. But today seems like the perfect day for such a thing! Here's to many more years, iPhone! <3

I still watch this keynote from time to time. What really gets me is the looks on the faces of people in the audience. What you're seeing is MIND = BLOWN.
S

Scary how quickly time has passed. Remember that presentation like it was yesterday.

It was the day that Apple Inc. changed the world we live in today.

The iPhone really did change the world.
2

Most influential keynote of our time. Absolutely a turning point in human history. And it was an outstanding presentation at its best. Steve Jobs at his best.
H

I read an interview where they were talking about how the phone was so incredibly buggy it would crash constantly, but Steve insisted on doing a live demo, so the engineers managed to find one specific way the phone could demo all the features he showed without crashing. Such an incredible showman and perfectionist. I miss that guy...

The Best Team Ever 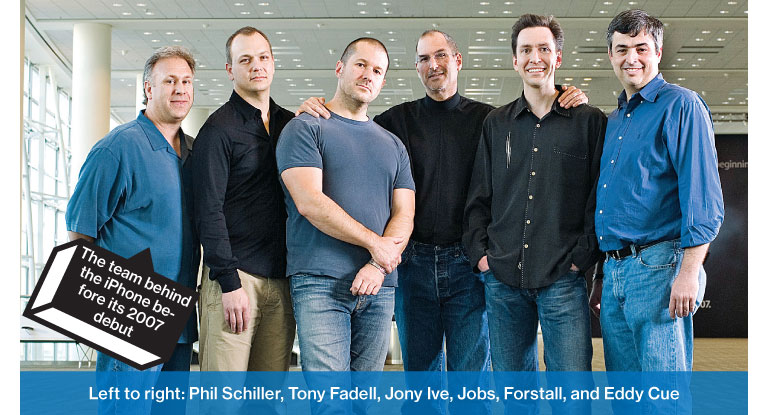 That it did. And it's funny how a lot of "experts" claimed it wasn't really a smartphone since it didn't run any applications like Symbian or Palm devices, plus it was 2G when other phones were 3G. That all changed a year later.

I also remember the remarks at how "big" the 3.5" screen was.

I think this will easily go down as one of, if not THE best keynotes ever.

I still remember watching it thinking 'this is the future'.
B

Nice attention to detail, MR! Posting the story at 9:41 am PST!
J

There was a very interesting article published into too long ago that covered this presentation. It spoke about the unstable iPhone OS software that was so bad when being tested prior to the keynote it was crashing every few minutes or so. Everyone behind the scenes at Apple held their breath for that keynote, crossing their fingers, praying that it wouldn't crash, because they just knew it was inevitable.

Somehow, it went off without a hitch. So, so lucky. The gods were on their side that day.

RIP Steve. We miss you.

BruiserB said:
Nice attention to detail, MR! Posting the story at 9:41 am PST!
Click to expand...

Ding ding ding! I wondered how long it would take someone to notice.
Reactions: CFreymarc
S

I feel slightly old. I remember having that first iPhone

Now I can tell my children and grandchildren that I was there when they introduced the iPhone.
W

pk7 said:
Still brings me the same excitement to watch it as it did seven years ago.

Whether people like to admit it or not, iPhone truly changed mobile phones forever.
Click to expand...

It's pretty great to watch that introduction again now. You can just see how proud Jobs was of the iPhone. More proud of it than any other Apple device before or since. Just... awesome.