Many early and late-2011 MacBook Pro owners with discrete graphics cards seem to be experiencing GPU failures and system crashes on their machines. In addition to several tips received by MacRumors, there's a lengthy thread on the issue on the Apple Support Communities, a Facebook group, and many reports of trouble on our own forums.

It appears that the MacBooks, first released on February 28, 2011, are displaying screen glitches primarily during graphics-intensive work or games. MacBook owners have noted visible striations and image distortion or an entirely blank screen, which can often be temporarily fixed with a reboot. 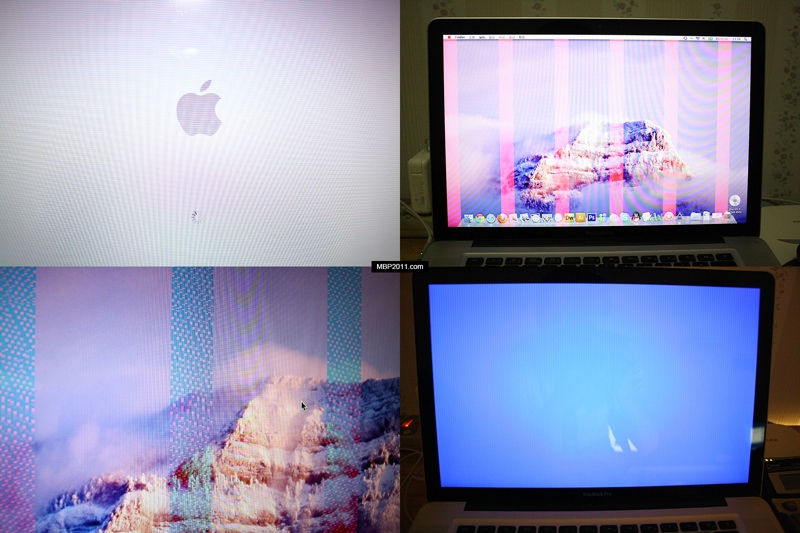 Mid-2011 iMacs with AMD Radeon HD 6970 graphics cards experienced similar failures and in August of 2013, Apple initiated a Graphics Card Replacement Program for the computers, replacing the graphics cards of affected iMacs at no cost.

This is really BAD thing !
M

Yep, this happened to me about a year ago. Early-2011 15" MBP. Luckily I had AppleCare and Apple replaced my logic board. No issues since.

This really pisses me off. My 2011 17" MBP was doing this and I thought it was giving up the ghost and I needed a laptop so had to buy a new MBP right before the 2013's were released..

And I really liked my 17" MBP which I still have.
P

MacMadHatter said:
This really pisses me off. My 2011 17" MBP was doing this and I thought it was giving up the ghost and I needed a laptop so had to buy a new MBP right before the 2013's were released..

And I really liked my 17" MBP which I still have.
Click to expand...

If apple offers free repair services, get it fixed and then sell it...?
W

I have a Mid-2010 MacBook Pro with the defective NVIDIA 330M. It will randomly kernel panic a couple times a day unless I force it to use integrated graphics at all times, which means I can no longer use my external monitor.

NVIDIA apparently paid Apple for these defective chips, but mine started showing symptoms just a couple months after Apple's 3 year warranty extension ended, and they will not fix it.
M

The MacBook Pro Mid 2010 models also have a Replacement Program. While not really the same thing, it seems the video chipsets in MacBook Pros are having issues.

My 2009 MBP reboots randomly. I have already tried reinstalling with and no backup. I've also seen that in a 2010 MBP of a classmate while studying and giving out a presentation.
S

My 2011 15" with a Radeon 6750M started kernel panicking and rebooting constantly just last Wednesday. I did a clean reinstall of OS X but the crashes returned last night. I'll have to monitor my graphics card switching and see if the panics are linked. Luckily, I still have Applecare...
P

Had this problem on my Early 2011 MBP last year. Apple replaced the logic board and battery(!) an no charge under AppleCare. No problem since.

Always get the AppleCare.
B

Exactly what happened to mine, costed me over 600$ to get it repaired by Apple. In the process of selling it, don't want it to happen again as I believe it's quite possible.

Well at least it might get some attention from Apple... unlike some other computer companies I know.

Does this happen in clamshell mode too? (using an external monitor)
L

I have a 2008 Macbook Pro and it has been freezing and locking up on me. Anyone else having this issue? Maybe it's the upgrade to Maverick.
B

I have had the same issues with my 15" Mid-2010 MBP and it didn't start till I upgraded to Mavericks. Fresh install of OSX, replaced the logic board and NVIDIA 330M twice, the ram, for some reason the magsafe and it's still having issues. It's even doing it in specific programs. Just got

madcran said:
The MacBook Pro Mid 2010 models also have a Replacement Program. While not really the same thing, it seems the video chipsets in MacBook Pros are having issues.

That program has expired, unfortunately.

It sucks because it's not like the chips broke out of warranty - they were defective the day they left the factory. It wasn't until some kernel changes in Mountain Lion that many people really started to notice it.
E

Paid apple to replace the motherboard, but not willing to give up the 17" I bought another refurbish in the meanwhile as backup. I saw tons of reports of this on 15" and 17" but Apple claimed there is no known issue.

I wonder if I'll get a refund if they ever acknowledge the problem.
V

It sounds to me very likely to be a heat issue.

Intermittent problems like this that crop up after a couple of years are probably because of degraded hear dissipation after fans accumulate some dust. Also eroded solder or thermal paste. I wonder if people going through this opened up their machines and blew dust off would see a reprieve.

lupado said:
I have a 2008 Macbook Pro and it has been freezing and locking up on me. Anyone else having this issue? Maybe it's the upgrade to Maverick.
Click to expand...

No my issue started before maverick released and Mavericks did not fix it either.

I'm glad I sold mine
V

epirali said:
I wonder if I'll get a refund if they ever acknowledge the problem.
Click to expand...

It's too bad. We pay almost double what other manufacturers charge because we trust their build and QA, so it's disappointing when this stuff happens and you buy other machines of theirs in the meantime. You've essentially rewarded them with more money for your previous hardware failure

This is reminisce of the nvidia 8600, which is a shame

We have one at our office that's doing the same thing... Expensive to repair so we've just held off, and we've given the user a PC.
You must log in or register to reply here.
Share:
Facebook Twitter Reddit Email Share Link
Register on MacRumors! This sidebar will go away, and you'll see fewer ads.
Sign Up
Top Bottom