Some Apple Watch Series 5 owners have been experiencing battery issues with their devices that cause random shutdowns even when the Apple Watch is reporting high battery levels. 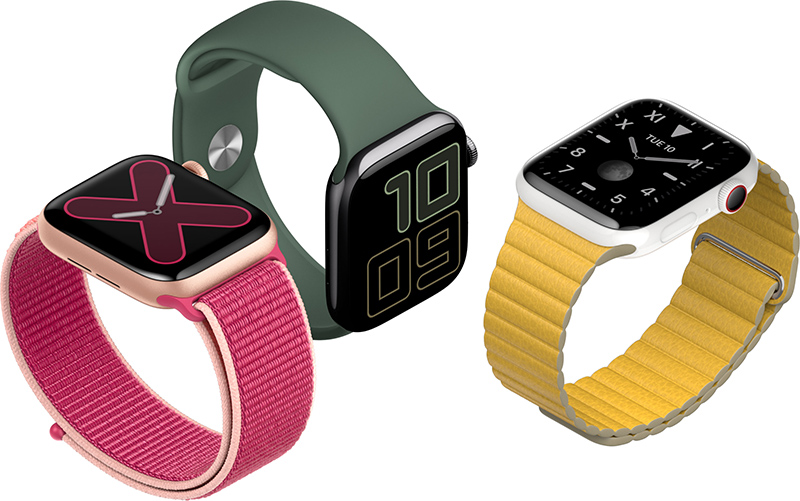 An inconsistent reading of actual battery level appears to be at fault, as in most cases, the Apple Watch reports near 100 percent battery levels for most of the day before dropping down to close to 50 percent and then shutting off. Macrumors reader Todd describes the issue:

Prior to a recent update, my watch had been accurate in reporting its battery level. It's hard to say which recent update MAY have created the issue, or if it's a result of something different, but I'm currently running watchOS 6.2.8. For the past few weeks, my watch has been reporting at or near 100% battery levels for the duration of the day - 5-6 hours at least. It will then drop down to around 53% and then abruptly shut off. Once restarted, it reports a battery level of 53% but will then shut down again if not placed on a charger.
Click to expand...

Other users have seen a problem where the Apple Watch shuts down at around 50 percent battery, charges up to 99 percent in a short period of time, and then has problems charging fully to 100 percent.

I am having the following problem with my Series 5 Apple Watch, purchased four months ago:

1. After a full charge, the battery charge indicator remains stuck at 100% for approximately 4-9 hours.

2. The battery charge indicator then begins to decrease.

3. When the battery charge indicator reaches approximately 15-33%, the watch powers down suddenly, with no low battery warning (which should be given at 10%).

In summary, the battery charge indicator is essentially never correct.
Click to expand...

Apple Watch Series 5 owners have been complaining about battery life issues since the device was first released in September 2019, and while it doesn't appear to be a widespread issue, there are a good number of people who are experiencing problems.

Complaints have persisted across multiple watchOS updates, and there have been a reports about battery errors after the latest watchOS 6.2.6 and watchOS 6.2.8 updates. Some affected users have been able to solve the problem by getting a replacement watch from Apple, but other techniques, such as resetting the watch, re-pairing, deleting watch faces, and more have not worked.

Given the mixed reports about the battery problems and the length of time that people have been experiencing issues, it's not clear what's going on but it appears that Apple hasn't yet been able to fix the issue.

That would suck. Thinking you are getting this amazing battery life and staying at 100% most of the day and then boom, it shuts down.
Reactions: AvisDeene, tranceking26, SqlInjection and 2 others
B

“Some” as in how many?
Reactions: SqlInjection

Last days my Series 4 (GPS) behaves the same. No problem until yesterday, no changes, no updates (I´m on the last one, no Beta).
Reactions: dantracht
F

here's whats probably going to happen:
- Apple finds out it's due to battery aging (nothing you can do about that)
- Apple fixes it with a software update by throttling the CPU
- People get outraged
- Lawsuit gets filed
- Apple ends up paying out and gets punished for fixing a physics problem
- No one wins in the end
Reactions: gene731, TiggrToo, Seanm87 and 10 others

On a related battery note, if you turn off the "always on" display, it improves battery life a lot. I usually keep the always-on display off so it behaves like a S4 and only rarely turn it on. Using it that way improves the battery life over the S4. Battery life is been my main gripe with the watch, but the way I use it, it goes all day and still ends up with 20-30% or so on the S5 vs 10-20% on the old S4.

This has been an issue for months with the AW5. The battery stays at 100% for hours then starts dropping then shuts off at 10-30 percent. Its a calibration issue. I've gotten around it over the months by taking the watch off once a week or so, shutting it down for 30 mins and its good to go for a week or more. I still get 30 hours though. Oh well by the time the fix, if they do, AW6 will be out.
4

farewelwilliams said:
here's whats probably going to happen:
- Apple finds out it's due to battery aging (nothing you can do about that)
- Apple fixes it with a software update by throttling the CPU
- People get outraged
- Lawsuit gets filed
- Apple ends up paying out and gets punished for fixing a physics problem.
Click to expand...

I really doubt it’s that as the series 5 isn’t even a year old yet.
Reactions: midkay, Enzorx, SqlInjection and 4 others
B

My Series 4 was doing that on WatchOS 6.
K

Kyle4 said:
I really doubt it’s that as the series 5 isn’t even a year old yet.
Click to expand...

Was only half joking, but it is a much smaller battery.

Exactly my situation with my series 4 for many months now. It would stay at 100% for hours and hours after being charged. Then it would drop to the 50s-60s. And next time I'd look, it would be dead.

Took it to Apple a while back and their test said the battery is fine.

It got to the point where I would have to charge it for at least an hour at least 2-3 times throughout the day to make sure it wouldn't just die on me.

This persisted through numerous updates, and multiple restores.

Based on some similar complaints online, I finally took it off for a week, let it die completely, put it in the freezer for a day, and let it thaw for a day. That was 2 weeks ago, and the battery % has behaved normally ever since. Just hoping it gets me through until the series 6 comes out.

My series 2 battery out performed my new series 5, even with the "Always On" toggled off so that behavior between the two matched.
B

About 3 days ago my Series 5 burned about 60% battery in about 4 hours of desk work. I reset it and it’s been fine since.
J

I don’t believe I have experienced any battery problems with my series 5.
Reactions: haddy and BigMcGuire

I'm on the latest beta and the battery on my series 5 is fine. (Always on Display on).
G

Folks, here's the word from Apple. The Senior Advisor I spoke to stated that he has never heard of battery issues with the Apple Watch. He said that if there was an issue, Apple would know about it before any user did, because Apple talks to over 1 million customers per hour, so the issue would show as a "Known Issue" before it ever affected any Apple Watch. Given this, he said the standard troubleshooting is to remove and re-seat the battery. Once you've done that, you'll need to plug the Watch into iTunes and do a DFU restore. Once you've done that, they'll send you an Apple Diagnostics file. You need to run Diagnostics, with Mail Logging enable to make-sure it isn't an issue with the Exchange server, zip the file, and submit it to Apple. This will then be sent to Engineering and they will get back to you within 48 hours with the official confirmation of a Duplicate Issue.
Reactions: DemianM, sideshowuniqueuser, namenotfound and 2 others

The battery on my Series 5 has always been weird. It will stay well above 90% half the day sometimes and other times it's in the upper 80's by 9-10 AM. I always make it through the day with 60+% though, so whatever.

So glad i skipped the Series 5.It was too small an upgrade from the S4. I never wanted the always on display and there was no processor upgrade.The battery is still holding up well on my S4 too seeing it’s almost 2 years old.I may hold on to it for another year depending how much of an upgrade the S6 is.
Reactions: midkay and decypher44

Time to throttle the apple watches
Reactions: Vanilla35, fatespawn, JosephAW and 2 others

I expierenced problems as soon as I downloaded the update. I rang Apple a couple of days later and one of the technicians rang diagnostics on it and said it needed repairing, I sent my AW5 back to Apple for repair and when they received it I received an email back saying nothing was wrong with it so they told me I was getting it back with a letter with options on. I livf chatted them as soon as I received the email to say before I’d sent it back a technician ran diagnostics on it and said it needed repairing I even sent them the repair number to take a look at the diagnostics but they said it had already been sent back to me. I was to set it up as a new watch when I received it back. I had been wearing an AW4 in the meantime and it was fine. When I got it back I re paired it and it has been ok since, so I don’t know what happened.

Mine works well. When you have it running defaults settings with always on and notification coming through I get a good 8-12 hours battery life. When I turn on theater mode and do not disturb, my battery life will easily jump to 24-30 hours of life.
Reactions: shuka.margolin
D

I was having the same issue on my series 4 a few weeks ago. 5 days in a row where it would randomly shut off overnight despite saying well over 50% before going to bed. It also wouldn't make it through the day and be unresponsive to any button presses. When connecting to the charger, the watch would report over 40% battery life as soon as it powered back on.

Was about to send to apple to investigate when one day I just left the watch on the charger for a lot longer than normal and it fixed itself. Haven't had the issue all month now. My guess is that something in the calibration for battery life is off. To everyone experiencing this issue, try leaving it on the charger for over 3 hours and see if that fixes this for you too.


Kaffebreak said:
Last days my Series 4 (GPS) behaves the same. No problem until yesterday, no changes, no updates (I´m on the last one, no Beta).
Click to expand...