Multimedia designer, Phil Lu, has created some mockups of an iPhone application that he calls "QuickOrder": 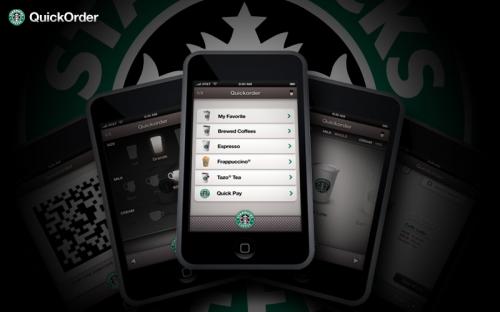 ​
Surprisingly, the mockups were created before the publicized patent application in which Apple explores to-go ordering from the iPhone. The series of images show how such a system might work.

coming from a starbucks addict- this looks awesome.

Love it!! ... but i always thought that you would be able to pay through itunes .. and have it bill you .. that way you just order it and go .. totally bypassing the payment process .. (and waiting in line)

Drumjim85 said:
Love it!! ... but i always thought that you would be able to pay through itunes .. and have it bill you .. that way you just order it and go .. totally bypassing the payment process .. (and waiting in line)
Click to expand...

that would be so ridiculously amazing.

JohnnyQuest said:
that would be so ridiculously amazing.
Click to expand...

and why not ... they already have you buying their songs and paying for them through itunes .. why not your order..

Looks awesome. Im not a huge fan of Starbucks but i would start going there to use this!!
P

very interesting and neat.
might be a niche market, but i could see it working.

And after Apple or Jobs sees that, he's hired
K

this would be amazing. so much potential with this sort of thing. though i do agree, billing through itunes would make things so much faster and better.
P

They should hire you!
O

The amount of creativity that exists in the iPhone community never seize to amaze me.

I can't wait for the official SDK and all the goodie we'll have with it.
Z

So when you say it predated the application, it has to predate the filing date, not the publication date. Seeing as how it's not been 18 months since we saw the iPhone, this can't exactly predate anything Apple did.

I had to look into the original articles you posted, from both macrumors and forbes. It appears the discrepancy shows up again. Forbes says "published" you say "filed."

It's not a big deal. Just a semantic issue, really. (and i have no idea if the forbes/macrumors discrepancy is a result of some later editing by forbes. It's not like you would have hand written that excerpt )

That design is outstanding.

*gets excited for MWSF all over again*

This would be pretty cool as long as all the people working at Starbucks could handle it without screwing up orders and everything.
F

Hmm...they could organize the drink types like play lists or albums "coffees", "teas" or lattes, frozen or some other categories and then open one up to scroll through the individual drinks like songs in an album.

chr1s60 said:
This would be pretty cool as long as all the people working at Starbucks could handle it without screwing up orders and everything.
Click to expand...

I'm sure getting an electronic print out of whats ordered is easier than scribble on a cup...

Am I the only one that sees an iPod Touch when looking at those pictures.. you would of thought they would get the correct device first. The AT&T Logo implies its an iPhone but its got a shiny curved edges.
P

Mac-Addict said:
Am I the only one that sees an iPod Touch when looking at those pictures.. you would of thought they would get the correct device first. The AT&T Logo implies its an iPhone but its got a shiny curved edges.
Click to expand...

No. I'm just admiring the concept and the artwork ignoring the little imperfections.

I don't go to Starbucks or drink coffee, but

I find this amazing!

If this takes off, I'll be able to order from Kroger, Papa John's maybe even a mail order bride!

Mac-Addict said:
Am I the only one that sees an iPod Touch when looking at those pictures.. you would of thought they would get the correct device first. The AT&T Logo implies its an iPhone but its got a shiny curved edges.
Click to expand...

... and no *thing where you put your ear while talking.* (I forgot what it was called.)

This looks REALLY cool - and as a Starbucks "grande soy no-water chai" junkie, the potential of this excites me.

But...call me slow, how exactly would this work -- or make a trip to Starbucks any faster? From the looks of it, you enter your order ahead of time, then it generates a semacode, and then that has to be scanned at the counter? Wouldn't you still need to stand in line for that? That just makes a system where it's unnecessary to talk to your barista, which seems awfully anti-social, if you ask me.

And even if you didn't need to stand in line, and you could somehow bypass it (paying through iTunes or something) and just walk up and get your drink...does that mean it's just been sitting there the whole time? Would a barista have to still scan your semacode before giving you your drink? What happens if a lot of people end up ordering this way...would that mean a lot of drinks just waiting around for people to pick them up?

I have two Starbucks I frequent regularly. The one near home is super-small and hardly ever has anyone in it. When I go there, there's hardly any time that goes by between entering, ordering/paying, and getting my drink -- it's super-quick already. So an ordering system like this wouldn't be necessary there. The other Starbucks near work is almost ALWAYS over-crowded, however. It's SO chaotic that I can't see how this iPhone ordering system would be more helpful there either. Drinks are always getting messed up, and stuff gets remade all the time. I can only see an additional iPhone system adding to the general confusion and delaying drinks even further.

Maybe I'm overthinking this...but was just curious how something like this really makes things any faster or easier. I guess it would have to go through an awkward adjustment period until enough people were doing it this way that it would work smoothly and efficiently.

It definitely LOOKS cool. One day we'll be doing EVERYTHING on our iPhones...

This looks awesome - now you can not only avoid eye contact with the 'person' behind the counter, but totally escape having to speak to them either!

Oh, and there is no way that Starbucks will ever bring in a policy that sees some customers get their drink quicker just because they have an Apple gadget.

This feature just isn't necessary. Unplug for a few minutes, even if only to buy a cup of coffee.

This would completely bypass the impulsive buys at the checkout that Starbucks probably makes a mint on! You know, like gum, bakery, cds, or MINTS.

Cool concept, but defeats a lot of what the cluttered checkout represents...

And I agree, it takes away from your daily bonding with another coffeelover (hopefully) on the other side of the counter.
M

this is a neat feature it be nice if other Companys get into this imagine ordering a pizza like this through ur ipod touch/iphone i hope this does expand to other areas than starbucks.
You must log in or register to reply here.
Share:
Facebook Twitter Reddit Email Share Link
Register on MacRumors! This sidebar will go away, and you'll see fewer ads.
Sign Up
Top Bottom