"Steve Jobs" biographer Walter Isaacson was on Squawk Box this week, and in an interview he mentioned that he "softened" parts of the book when it came to certain Jobs quotes (via CNBC). 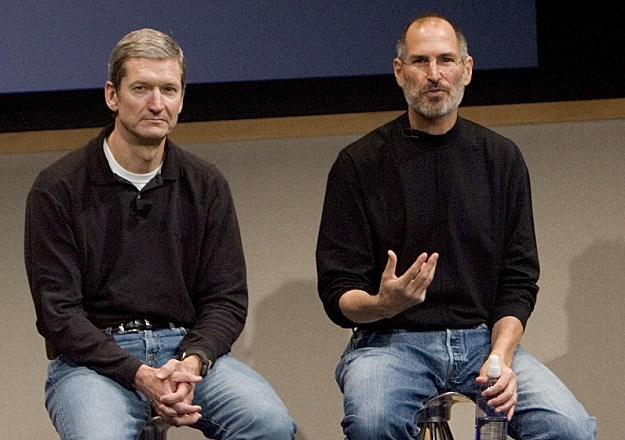 Particularly, Jobs was said to have criticized current Apple CEO Tim Cook for not being a "product person." According to Isaacson, "Steve says how Tim Cook can do everything, and then he looked at me and said, 'Tim's not a product person.'"

Isaacson said that he wanted to soften certain things that he thought were too harsh in his biography of Steve Jobs. The book first launched in October 2011, just 19 days after Jobs died from pancreatic cancer.

"Sometimes when Steve was in pain ... and he was angry, he would say more things that [Cook] was not a product person," recalled Isaacson. "I felt I would put in the specific things that were relevant to the reader but not the complaints."
Click to expand...

Cook was also mentioned in a recent piece by The Wall Street Journal, which focused on Jony Ive, who reportedly became "dispirited" because of Cook's lack of interest in the product development process. Ive announced that he will leave Apple later this year and start his own design studio, with Apple as one of its primary clients.


Isaacson has been critical of Apple as a whole in the past, believing in 2014 that Amazon and Google had overtaken Apple to become the most innovative technology companies of the modern day. At the time, he specifically referenced virtual assistants as a space where Apple needed improvement.

Isaacson's biography of Steve Jobs went on to be the basis for Aaron Sorkin's screenplay of the Danny Boyle-directed film "Steve Jobs." The film was well received by critics, earning four Golden Globe Award nominations and two Academy Award nominations.

As if we didn't know this. Duh!
Reactions: jdclifford, greenmeanie, Lopov Jack and 52 others
Comment

But “Tim can do everything” but he’s not “a product person”? Seems contradictory or maybe he got it wrong.
Reactions: snek, thasan, AlexGraphicD and 11 others
Comment

Weird how once every couple of years Isaacson comes forward with another revelation that for some reason didn’t make it into his book.
Reactions: Jimmy James, StumpJumper, Mactendo and 42 others
Comment

Tim has been a good leader in his own right with his commitment to privacy, ethics in big tech etc., but it is just telling when Scott Forstall, Steve Jobs, and Jony Ive all had the same issue with him. Jobs notwithstanding, Forstall and Ive left before the ship started sailing adrift
Reactions: Mactendo, thasan, MrGouda and 17 others
Comment
P

All that matters to Tim Cook is how many days of inventory there are in the supply chain.
Last edited: Jul 10, 2019
Reactions: Mactendo, c0ppo, VMMan and 14 others
Comment

Tim is CEO, he doesn't need to be a product person...but somebody at Apple does.
Reactions: J.J. Sefton, greenmeanie, freedomlinux and 65 others
Comment

Walter Isaacson is an opportunist who wants to milk his horribly-written biography even more.
Reactions: Jimmy James, StumpJumper, haruhiko and 28 others
Comment

I have no issues with Cook not being a "Product Person". It doesn't have to be his job. He is great at being the face of the company.
But make sure you hire someone who really is the product person and make them in charge of that area.
Also, get rid of dead weight with 1990s ideas like "Fast" Eddy Cue.
It seems like Cook is loyal to a fault.
Reactions: Jimmy James, yunzan, AlexGraphicD and 14 others
Comment

Well, Steve was a true visionary. Also on that matter.
Reactions: Hi Tek, Mactendo, AlexGraphicD and 2 others
Comment
K

But “Tim can do everything” but he’s not “a product person”? Seems contradictory or maybe he got it wrong.
Click to expand...

Not really. You can be a chef that knows how to cooks everything right (meat at the right temperature, perfectly steamed veggies, etc.) but doesn't know how to create a bold new dish by incorporating different flavors. So they are good at following recipes and perfecting the timing but can't create a new dish.
Reactions: Mactendo, AlexGraphicD, motulist and 11 others
Comment

That’s why Tim Cook hasn’t replaced Steve Jobs. No one will. And Apple knows that. Cook is an actual CEO, performing the tasks of a CEO. He knows to defer to people in the company that have the skills needed to imagine, engineer and market a product. He surrounds himself with the best people in their respective areas of expertise. That’s what a CEO is supposed to do.

Steve was unique in that he wasn’t exactly a CEO in the traditional sense. He was a Chief Executive Visionary. Even while Jobs was here, day to day running of the company, traditionally tasks run the CEO, were run by the COO — non other than Tim Cook. That’s why he transitioned so seamlessly into the role.

We’re lucky that Tim Cook knows that he’s not a product guy. That was the problem with Gil Amelio. He wasn’t either but the difference between Amelio and Cook is that he thought he was and tried to be another Steve Jobs. Someone with a lack of introspection and a self critical eye, who thinks they know best about what a product should do and look like, who has the power to push forward despite what people with actual talent advise against, could destroy the company. Gil Amelio almost did. Tim Cook, on the other hand has deferred to his experts, knowing that designing and engineering products is not his expertise. And Apple has flourished under his tenure.
Last edited: Jul 8, 2019
Reactions: TonyC28, bwintx, docziandras and 59 others
Comment

It’s funny how this guy keeps surfacing every year or two with different quotes that Steve Jobs is supposed to have said. Move on guy.

Tim Cook has done a great job with Apple, no it’s not the same Apple that’s because it’s not 2011 or before, it’s now 2019. Tim Cook has had 2 brilliant successful products while he’s been in charge, Apple Watch and Airpods.
Reactions: Table Top Joe, StumpJumper, haruhiko and 14 others
Comment
J

Isaacsons opinion on Apple and the corporate landscape is about as useful as mine. Just another person with opinions ranting for free. There was only one Steve Jobs. Google and Microsoft and even Amazon don't have one. Every corporation must carry on with only mortal leadership.
Reactions: StumpJumper, thettareddast, diandi and 4 others
Comment
S

I have to say yeah. Of course, Tim doesn't need to be a product person - but, he needs to know that and make sure someone reporting to him is a product person (Williams might be okay here, we'll just have to see).
Reactions: GrumpyMom and paul4339
Comment
B

Tim Cook deserves much credit for getting Apple to where it is right now. He built on Steve's company in large part by making the business of Apple a profit powerhouse. But I have serious doubts that he can take Apple much further at this point. The company badly needs an innovator who has a Jobsian sense of what technology could do.
Reactions: yunzan, AlexGraphicD, smashcutt and 5 others
Comment
Z

This guy making his money by releasing a new quote a year
Reactions: StumpJumper, ErikGrim, thettareddast and 9 others
Comment
B

Sasparilla said:
I have to say yeah. Of course, Tim doesn't need to be a product person - but, he needs to know that and make sure someone reporting to him is a product person (Williams might be okay here, we'll just have to see).
Click to expand...

Yes, this could work if that person is a true visionary and if he/she has Tim's ear. However it happens, Apple needs new blood now.
Comment

Angela leaves, Jony leaves, and this stuff surfaces.
Bit of a reading the tea leaves but it looks like they're paving the road for Mr. Federighi's role as CEO.
Reactions: AlexGraphicD, smashcutt, AxiomaticRubric and 1 other person
Comment
B

twocents said:
Tim has been a good leader in his own right with his commitment to privacy, ethics in big tech etc., but it is just telling when Scott Forstall, Steve Jobs, and Jony Ive all had the same issue with him. Jobs notwithstanding, Forstall and Ive left before the ship started sailing adrift
Click to expand...

I disagree with Tim on his politics but I give him a lot of credit for Apple's commitment to privacy and Apple usually being among the first companies to jump in and offer financial support after a natural disaster. I agree with the other commenter on this thread who said the CEO doesn't have to be a product person but someone in the company has to be. Tim is a likable, relatable spokesperson for the company and probably one of the most recognizable CEOs in the country.
Reactions: George Dawes, twocents, RogerWilco and 7 others
Comment

But “Tim can do everything” but he’s not “a product person”? Seems contradictory or maybe he got it wrong.
Click to expand...

Tim can clearly "do", as in build up a supply chain. I interpret Steve's comment as he can do, but not "create" (as is, he has no creativity).
Reactions: George Dawes, Mactendo, entropys and 3 others
Comment
C

The ceo doesn’t have to be a product person. He or she simply needs to be able to manage things. Besides be careful what you wish for.

The notion that someone else can come in, be a product guy and have a Steve Jobs aura about him is far fetched. There’s too many sharks at top to allow that kind of thing now.
Reactions: entropys, nouveau_redneck, GrumpyMom and 4 others
Comment
You must log in or register to reply here.
Share:
Facebook Twitter Reddit Email Share Link
Register on MacRumors! This sidebar will go away, and you'll see fewer ads.
Sign Up
Top Bottom