Last week, an image was posted on Twitter by noted leaker @evleaks appearing to show a "SwiftKey Note" app for iOS from the company behind the popular alternative Android keyboard that ranked as the top-selling paid app on Google Play last year.

SwiftKey Note is indeed real and it launches today as a note-taking app that optionally integrates with Evernote's popular suite of apps. The app offers several features to allow for faster and easier note-taking, including automatic word suggestions based on context and personalized auto-correction. SwiftKey's suggestion and autocorrect features learn over time based on context from previous text entries, and can tap directly into a user's Evernote archive to assist with predictions.

SwiftKey's Chief Marketing Officer Joe Braidwood told MacRumors that his firm was approached by Evernote early last year about the possibility of developing a SwiftKey app to integrate with Evernote, and the two companies have worked closely together and with Apple to bring that vision to reality.

With Apple so far refusing to allow developers to create systemwide alternative keyboards for iOS, SwiftKey is limited to bringing its keyboard functionality to its own apps and releasing tools to allow other developers to offer it in their own apps on a case-by-case basis. As such, SwiftKey Note also serves as an example and marketing tool as the company looks to partner with select third-party developers going forward before opening up broader access through an open SDK. 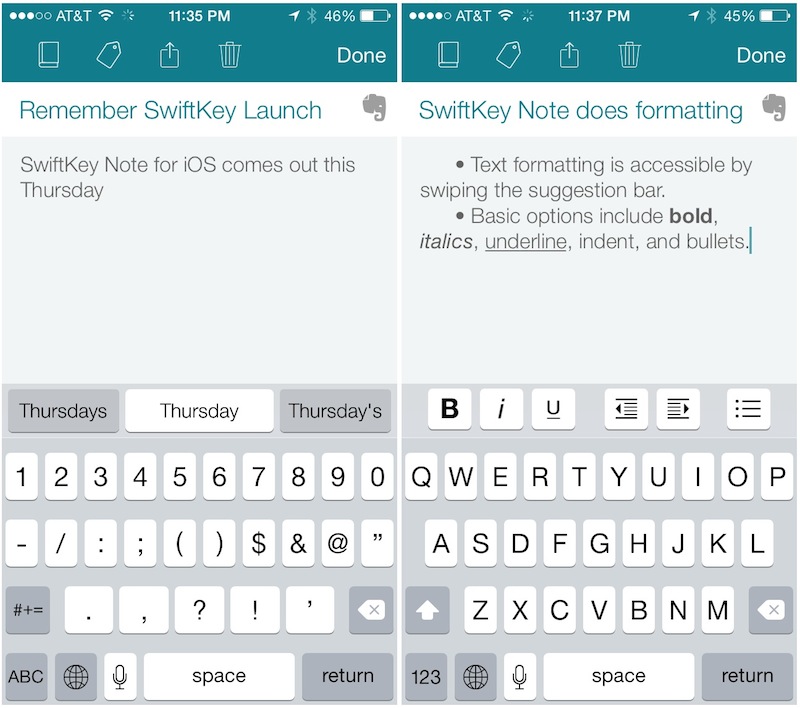 Apple's prohibition of alternative systemwide keyboards has also contributed to SwiftKey's decision to not include support for the gesture-based typing found in its Android keyboard. For the time being, SwiftKey Note includes only the standard iOS keyboard to ensure familiarity for users, augmented with word suggestions appearing by default in a narrow bar above the keyboard, although the "tap to dismiss" interface familiar to iOS autocorrect users is also an option. Gesture input may, however, also be added in the future depending on user feedback.

One final key feature of SwiftKey Note is multilingual support, with the app able to offer contextual word suggestions in up to three languages simultaneously. Initial language support includes English (US and UK), German, Spanish (Spain and US), French (France and Canada), and Italian.

Unlike the SwiftKey Keyboard app for Android, SwiftKey Note for iOS arrives as a free app for iPhone, iPad, and iPod touch, giving the company the opportunity to test the waters of iOS with a useful but still lightweight app accessible to all users. The app requires a minimum of iOS 6, although text formatting is currently only supported on iOS 7. [Direct Link]

I've used these kinds of keyboards a couple of times before, but never seemed to get the hang of it. Is it really that much better?

That formatting bar makes so much sense; it truly puts Apples current system of tap + hold + cycle through contextual menus to shame!

This girl in the video is really beautiful!

Please just release this as a jailbreak app. I will pay you good money for it!
T

Replace stock with this via jailbrewak?
A

It's not really different than the standard iOS keyboard from a UX perspective, you're just getting some smart word suggestion/spelling corrections above the keyboard. The difference here is that the auto correct and word suggestions are learned (from Evernote in this case) and not only from a static dictionary, and they've made it one click. You'll need to be a heavy Evernote user in order to maximize the Swiftkey word database as it has no other sources to draw from.

However, the best parts about Swiftkey from Android are still missing here: gesture based typing, and ability to learn from a multitude of sources (your SMS app, Facebook, etc).
A

Apple needs to get their **** together and let us use this system wide.

The principle of "we know best, you don't need to change anything" doesn't really work when their solutions are dated and and kind of crappy.

I don't think so no, but a lot of people rave about Swiftkey. On the brief occasions where I use an Android device, it is my go to keyboard over stock but I get far better results and speed with the iOS keyboard.
T

just downloaded it and wrote down some thoughts. i gotta admit, its pretty awesome. (used it in german)

unfortunately i don't really use note-taking apps - don't know what for. except creating wordlists (e.g. grocery lists) and it doesn't really make any sense to use SwiftKey just for that kind of lists...


i'd love to see a jailbreak tweak working with that keyboard, though. - i mean, if thats even possible.

i have swifty on my nexus 4 and i never got the hang of it. i even have autocorrection turned off on my iPhone. German and its different "slang" for words in every other town certainly doesnt help. id spent half the time correction words. simply typing them all out is a lot faster to me

My Android loving friend swears by it. But I swear by a physical keyboard on my phone so its all subjective to what you want I guess. Touchscreen typing will most likely never work out for me.
A

ahlsn said:
Apple needs to get their **** together and let us use this system wide.

The principle of "we know best, you don't need to change anything" doesn't really work when their solutions are dated and and kind of crappy.
Click to expand...

Or build it themselves. Is it THAT hard to go to from a manual static dictionary to an auto-updated dynamic dictionary? Apple wouldn't even have to work with other companies. Even just using the Mail app and the SMS app should be good enough sources to update the word prediction model. The user experience would tangibly be so much better every single day we use the device, and I can't imagine this being rocket science for their developers to implement.
D

This is the only thing which I really misses from my android experience. After months of use swiftkey learned my typing style in several languages and was absolutely amazing.
Apple should just buy the company and implement it

Can someone just make a keyboard like this for Cydia? That would be cool!

I think it's time apple steals this idea


Patriks7 said:
I've used these kinds of keyboards a couple of times before, but never seemed to get the hang of it. Is it really that much better?
Click to expand...

I loved swipe on android.... But hate android. It's much faster if your texting with one hand

Gesture typing has me typing maybe five times faster on my Note 2 than I ever could on any of my iPhones, and is one of the reasons why iPhones aren't currently an alternative for me anymore. So, seeing this gimped version of SwiftKey being released for iOS really feels just a little bit sad.

Given equal familiarity, yes. As an investor, I think Apple ought to buy SwiftKey already and be done with it. But that would mean the end of the Android version, which would suck.
T

In order for this to work for you, you need to have an open mind to try something new. I know it might be difficult to fathom, given that iOS has had the same keyboard on it since its inception. Once you use this, there should be no reason why you would ever want to go back to a single tap keyboard.

I use dictation for all my Texting, Messaging, and note taking. It's way faster than any swiftkey will ever be.

I just dictated this entry via my Macbook as well.
D

With Apple so far refusing to allow developers to create systemwide alternative keyboards for iOS,
Click to expand...

I don't care if they are system wide, I just want a better keyboard, even per app would be fine. I have seen so many better keyboard layouts, all of which make the one in iOS look like a BlackBerry. Apple needs to loosen the grip a bit.

I think it's time apple steals this idea
Click to expand...

How can you steal an idea that has been around for ages? The whole point of 'stealing' an idea is to use it before anybody else realises its potential. If Apple were to use a SwiftKey-esske keyboard for iOS, it would most certainly be copying.

Which would make them a good artist.

These kind of "prohibitions" are what makes me away from iOS. On Android, I simply reboot my phone with a zip file and I get system-wide access to all its features. It's not a perfect world, though. It would be best if it was fully open-source, but it's the best we have for the moment.

A decent keyboard (perhaps even better than Swype or SwiftKey) would make me think seriously about entering the iOS world.

That's how keyboard worked on Samsung Galaxies for quite a long time (modulo the rich-text formatting).

I just tried it out and I quite like it. But I will have to keep using it to see if it is actually better.

I do wonder though, if they are going to allow an SDK to implement SwiftKey into other apps how they plan on sharing the database...or if they can. Maybe they could use a URL scheme to allow other apps to add back to the original database, and on launch the apps would request the database from the main swift key app.