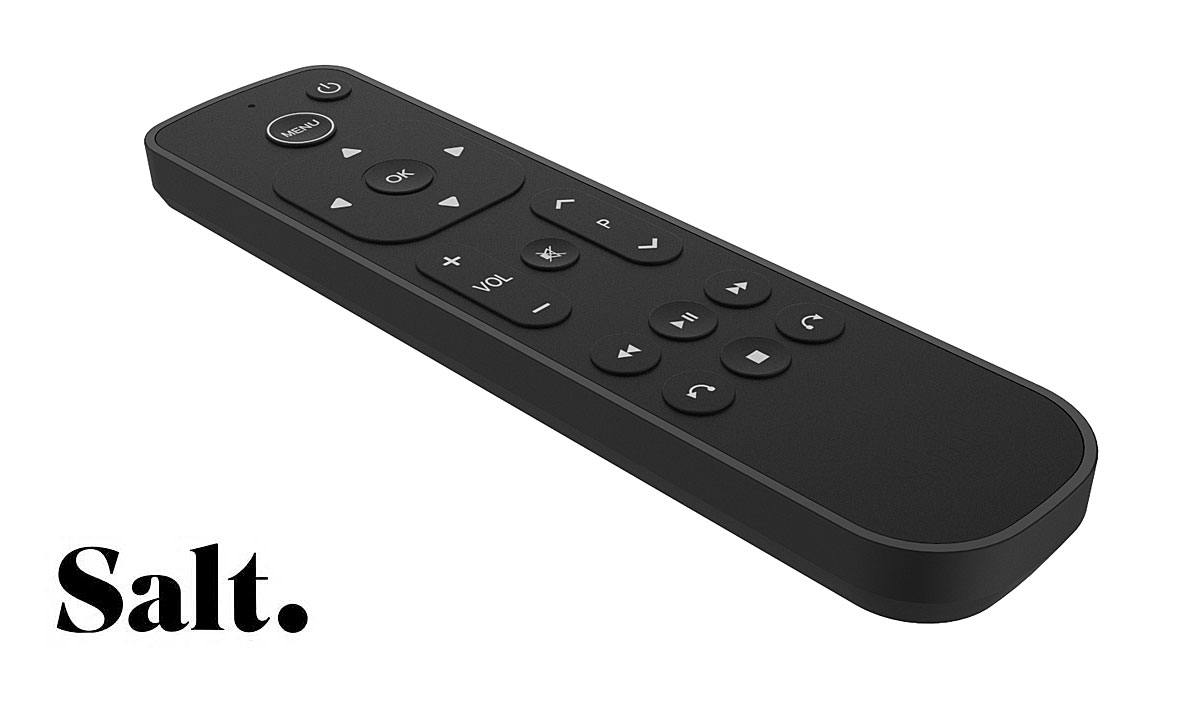 Costing just under 20 Swiss francs, the optional remote was reportedly developed in close collaboration with Apple, after a sizable section of Salt TV's customer base apparently complained about the poor usability of the Apple Remote that comes with every Apple TV 4K.

Thanks to Apple's input, the alternative remote doesn't require any pairing with Apple TV and works out of the box. It includes directional arrows in place of the Siri Remote's glass Touch surface, a power button in addition to a Menu button, along with separate volume and channel rockers and traditional media playback buttons.

There's no microphone button in evidence, presumably because Siri on Apple TV isn't officially available in Switzerland, and there's no numerical channel buttons because tvOS doesn't support the function. Otherwise, it resembles a standard TV remote that should be more amenable to Salt TV's users, who can also look forward to an updated Salt TV app interface on Apple TV.

It's unclear if this is a one-off Apple TV hardware collaboration between Apple and a regional third-party, although having said that, Apple recently made Microsoft and Sony controllers compatible with tvOS and iOS, so maybe this indicates a new trend.

Either way, Apple has obviously listened to feedback and decided its Siri Remote isn't the most optimal design for enjoying multi-channel TV navigation after all. The alternative remote control for Salt TV can be set up to work with almost all standard TV sets, and is available to order on the Salt online store.

I agree the standard remote isn’t awesome, but how much do you really need to use it? Once you start watching, the remote use is pretty limited.

I just use the remote on my iPhone anyway.
Reactions: martyjmclean, Rogifan, aylk and 1 other person
Comment
F

WANT! But I don’t see a way to order from the online store, it just directs you to a store locator in Switzerland. I’m in the USA. Can I not order this from the USA? Anyone else have any luck?
Reactions: Internet Enzyme, aylk, oneMadRssn and 2 others
Comment
N

frozen220 said:
WANT! But I don’t see a way to order from the online store, it just directs you to a store locator in Switzerland. I’m in the USA. Can I not order this from the USA? Anyone else have any luck?
Click to expand...

I dislike the current ATV remote quite a bit. Too small, the multifunction glass touch pad is a PITA. The entire remote needs backlit buttons. At least with the last update they changed how the ATV turns on. The default now is that you have to press the menu button. Before I was always turning on the TV inadvertently just by picking up the remote.
Reactions: canterro, class77, iPhilPHX and 7 others
Comment
B

The interface, and the remote need re-done. The Apple TV is the most un-Apple-like product that is made by Apple.
Reactions: _Refurbished_, ignatius345, goobot and 6 others
Comment

I don't get the hate for the apple remote. With normal buttons you don't get that more movement playfulness you get with a touch screen. Icons don't just move left right they kind of have a bounce. So animation on a dedicated button won't have this. It will just plop to the next icon without animation like on an devices with a button keypad.
I like using my phone for the controller anyway you don't really have to look at it with the layout they have, even hitting the buttons I don't have to look at my phone.
The touch pad on the normal apple remote is decent id like them to make a touch screen haptic touchpad like they do the Macs trackpad. I mean they sell a separate trackpad that feels exactly like the MacBook's trackpad so they could. The control on that is much better and the clicks would feel much better than the hard click on the appletv remote.
I still prefer the apple remote over any shield remote or fire stick I've played with that's for sure.
Reactions: ZZ9pluralZalpha, star-affinity, FuzzMunky and 1 other person
Comment
A

Sign me up. I would be. The trackpad navigation is frustrating and slower than buttons.
Reactions: ignatius345, gridlocked, DotCom2 and 5 others
Comment
J

Given the lack of need to pair, and no microphone, I'm going to assume it's an IR remote, and not a bluetooth remote, so I'd have no interest in it.
Reactions: tonyr6, aylk, Jimmy James and 2 others
Comment
A

Based on the interest mentioned in above comments, I guess I should just buy a ton of their remotes and re-sell them to people living outside of Switzerland for a 30% markup
Reactions: Ulenspiegel, ignatius345, nburwell and 10 others
Comment
S

I find the stock remote a pain. I use it, but I find it so slippery and I seem to lose grip on it with it ending up in the cushion crevice of my chair. Also, whenever I pick it up, I usually end up picking the wrong end as it doesn’t really have an indication by feel alone.
Reactions: nt5672, aylk and decypher44
Comment

seadragon said:
I find the stock remote a pain. I use it, but I find it so slippery and I seem to lose grip on it with it ending up in the cushion crevice of my chair. Also, whenever I pick it up, I usually end up picking the wrong end as it doesn’t really have an indication by feel alone.
Click to expand...

Ever since I put those silicone cases on my remotes, I have zero issues with them. I get the white cases so they are easier to see. Other than being slick and easy to lose, I don't understand the hatred of the remote. It is incredibly slick and versatile. If you want single tap arrow buttons, the touch pad allows you to operate it that way. You never have to readjust your grip because it's the perfect size. The battery lasts ages and gives you warnings when it is low. I'll admit it takes a little getting used to, but I love it now and would never want to go back to a traditional remote like this.
Reactions: star-affinity, FuzzMunky and neander
Comment

Baymowe335 said:
I agree the standard remote isn’t awesome, but how much do you really need to use it? Once you start watching, the remote use is pretty limited.

I just use the remote on my iPhone anyway.
Click to expand...

This is why the average joe shouldn't be allowed anywhere near the design and development of hardware or software. Did you really just suggest that finding your iPhone, Swiping on it, Tapping on the remote app/widget, is easier than a dedicated dumb piece of hardware that is always next to the couch?

Shut up and take my money.
Reactions: decypher44
Comment
F

I too dislike the stock Apple TV remote. Makes me wonder if the remote’s designers actually used it for any length of time.
Reactions: tookitogo, nt5672, aylk and 1 other person
Comment

I like my Apple TV remote, it’s way more functional and very easy to learn. I think these people either don’t want to learn or don’t have access to Siri to help them. But hey, nothing wrong with giving consumers the option.
Reactions: FuzzMunky and neander
Comment
F

arnoz said:
Based on the interest mentioned in above comments, I guess I should just buy a ton of their remotes and re-sell them to people living outside of Switzerland for a 30% markup
Click to expand...

You will make money. Do it before this remote is offered outside of Switzerland.
Comment

The ATV touch remote is the single worst remote among all of my OTT devices of any generation. Adding the ring around the Menu button did help slightly.

I still use the aluminum ATV remote with the ATV in our house and normally keep my iPad / iPhone handy and use the remote app with my three ATVs that I use for work (testing, demos).
Reactions: aylk, coolfactor and decypher44
Comment

Hmm, I don't have a problem with the standard ATV remote but when my Mom visited me she just could not get the hang of the touch pad part. Might be handy for guests and come to think of it some functions don't work very well on the touch part.
Reactions: Kkspire and ikir
Comment

Instant buy if they ship to Canada, and if it’s Bluetooth.

The Apple remote is good for swiping through content when reviewing the previous episode, for example. Other than that, it’s basically trash. One of those remote covers from Amazon keeps it from sliding into the couch. But I paired an old cable box remote to get actual buttons.
Comment

arnoz said:
Based on the interest mentioned in above comments, I guess I should just buy a ton of their remotes and re-sell them to people living outside of Switzerland for a 30% markup
Click to expand...

30% ?? Hell you could probably charge $40 + shipping and only lose a couple sales. Sure there might be a few who actually even like it (rather than just tolerate it) but even some of us rabid Apple fans hate that damn remote lol.
Reactions: decafjava
Comment

I strongly dislike my ATV remote and would pick this up in a second if it was available outside of Switzerland.
Reactions: aylk and jim.arrows
Comment

I use one of these with a Tile track wedged in between, so not only do I get a decent grip on my  TV remote, I can also find it when it disappears.

 Solution: Make a heftier remote with a “Find My” tracker built in.