iPhone owners in the United States spent an average of $40 on premium apps and in-app purchases on each of their devices in 2016, according to new data shared by analytics company Sensor Tower. That's up from an average of $35 in 2015.

Unsurprisingly, most iPhone users are spending their money on games. 80 percent of U.S. App Store revenue in 2016 was generated by games, and on average, iPhone users spent $27 on game-related content. 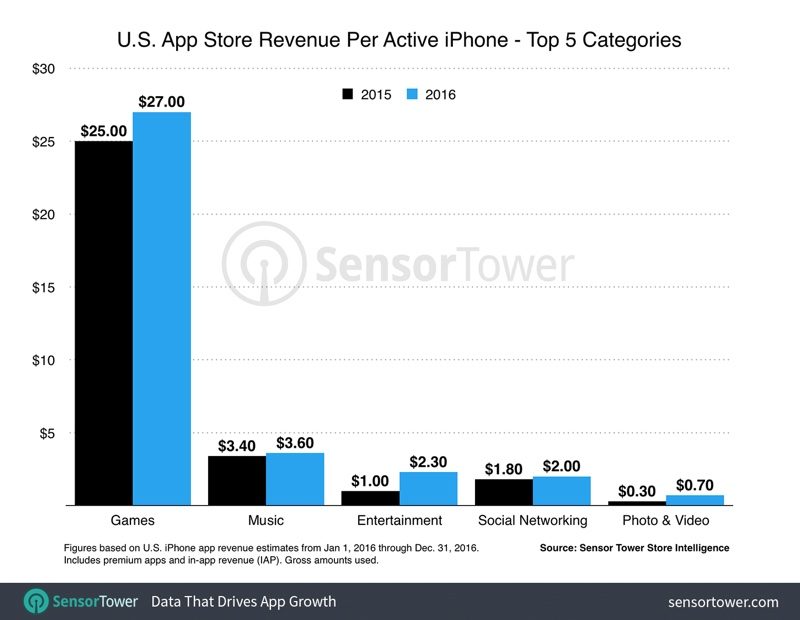 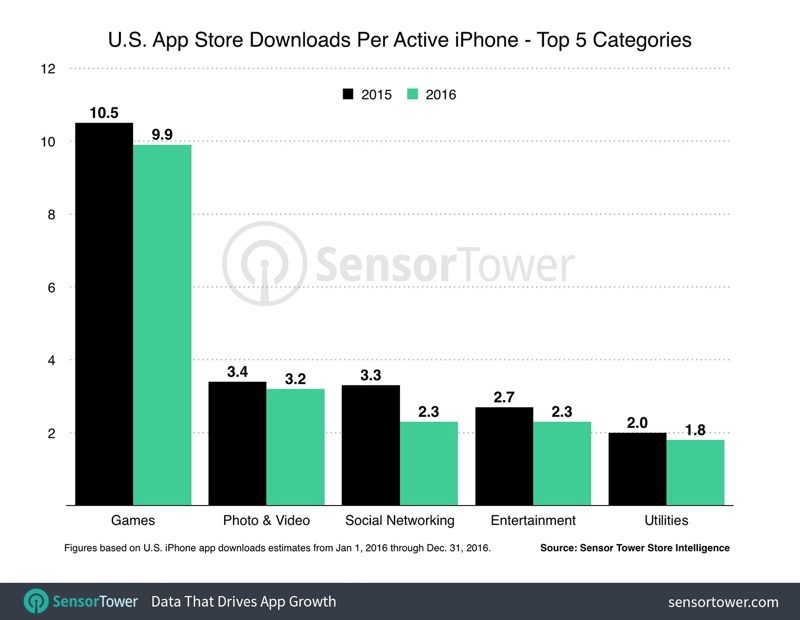 According to Sensor Tower, its estimates are based on data pulled from 132 million active iPhones in the United States during the 2016 calendar year (January 1 to December 31). The numbers use estimates from Consumer Intelligence Research Partners and the company's own Store Intelligence platform.

All revenue estimates included in the report are gross amounts spent by consumers before deducting Apple's 30 percent revenue cut.

Seeing as iPhones are now devices parents shove in front of their kids faces so they don't "bother them"....I'm not surprised.
Reactions: Speedy Dingo and Cameroncafe10a
Comment

Hmmmmm.. and I have 229 apps currently installed on my iPhone. After I deleted a few a week ago
Comment

I only bought Procreate for my iPad/Pencil. I'd like to buy more but I'm into legacy software and iOS isn't a platform for that.
Reactions: Cameroncafe10a
Comment
N

the most expensive app i ever bought was a game for 1.99$ a year ago and then i realized them US prices dont include tax and got mad at myself lol
Comment

I bought super MARIO run and that was the first paid app in years.
Comment

You have to know that every sale was not a "stupid game", right?

Never mind, I missed that sentence somehow. You are right, that is sad
Comment

Or in other words, people bought slightly less apps in 2016 (vs 2015), but paid slightly more overall.

That's not good news, from a consumer standpoint.
Comment

It is incredible how much money some people spend in freemium games. I've never ever been tempted to spend any real money in a freemium game. Ever. I've only purchased a few apps like Lapse It, Pixelmator, and a couple non-freemium games. And sometimes I pay to remove ads.
Reactions: Oblivious.Robot and max2
Comment

Can't remember the last time I bought an app.
Comment
B

I don't get it. Would you rather not have games on the app store? Is Apple doing a disservice to to its users by giving them the largest mobile game catalog? Users seem to enjoy playing the games offered at the app store. That seems decently enriching.
Comment
J

As much as I think of iPhone as becoming boring for my taste. But their apps are the most polished one. After all we are spending most of our time on those apps than the OS itself. This is the only reason why developers are spending their time improving their apps because this is where the money flows. Whoever pays your job that's where you spend you resources.
Comment

Never spent money on games. That's worse than playing the lottery.
The last app I purchased was Plane Finder because I needed to track a flight from Denver to Washington. Other than that I pay for LQ Netflix, NFL Mobile and did the trial of SlingTV but they would blackout games which was a deal breaker.
Comment

Same, if I spend money on an App Store thing, it's rare

Some things I have spent money on I'm not saying I never spend money, but nothing more than $5 total on things in a year

I used to buy power up mega boost 5000x, but I realize games that do that stuff are douchebags that don't deserve my money, and I also don't need to buy it in the first place
Comment
U

Why do you develop for iOS?

Meanwhile, I do not know a single person that spent that kind of money in the Google Play Store last year.
But hey, developers don't need to pay rent and eat, right?
Comment

I used to buy apps all the time. Now I just don't have time to try out everything, and I feel like advancements in UI design have really stalled. Combine that with the fact that stock iOS does so much more than it used to, and there's less reason to go looking. When it comes to games, I really stopped caring once most games went Freemium. I'm looking forward to my Nintendo Switch arriving next week and playing better games during my lunch break and when I travel. I think I'm gonna need a slightly bigger work bag, but my bag is already pretty small so it's not that bad. I'll be switching to a mirrorless camera this summer, so I'm gonna need something a little bigger to lug around my gear anyway. I just hope I don't get mugged: Apple Watch, iPhone, iPad, Sony A7III with mid to upper-range glass, Nintendo Switch. Yikes!
Comment

GoodWheaties said:
It is incredible how much money some people spend in freemium games. I've never ever been tempted to spend any real money in a freemium game. Ever. I've only purchased a few apps like Lapse It, Pixelmator, and a couple non-freemium games. And sometimes I pay to remove ads.
Click to expand...

Yeah pretty rare for me to pay for a freemium games. If games are not playable without paying micro-transactions I generally delete.
Comment

I've bought one app that keeps track of your vehicle maintenance and a few in app purchases. After having lost access to what I consider the best Craiglist app, because Apple chose to delete it from the app store I will never purchase another app.
Comment
You must log in or register to reply here.
Share:
Facebook Twitter Reddit Email Share Link
Register on MacRumors! This sidebar will go away, and you'll see fewer ads.
Sign Up
Top Bottom