As us new iPhone 3G users get our new phones, we are subject (to like any expensive product we buy) to analyze it, and if something is wrong, we lose sleep over it (yes that is the case for some people). Overtime, as you get used to the iPhone, all the little things will be forgotten about, or dimmered down compared to what they are now. Just something to keep in mind.

I currently have 3 iPhones in the house, 2 of them are the iPhone 3G. Due to all the poor battery comments, i decided to see how exactly the batterys last, and how it does compared to a 1st gen iPhone.

Now, since the majority of us who upgraded to the new iPhone had the first iPhone, the first gen iPhone battery life obviously doesn't keep it's charges as well as a new iPhone. The EDGE iPhone is not going to last as long because it constantly has to download from the network, at least 3G downloads it quicker, and the fact that the EDGE iPhone has been used for a while now.

The file is a music file hosted on my website. It's exactly 1 hour in length, and the file size is 54.3MB. I started the song loading right at the beginning of the timing. The iPhone 3G will have the song completed sooner because it starts playing right away, while the EDGE iPhone takes a little bit to load it first. For the record, the iPhone 3G loaded the song in about 1/2 - 2/3 quicker than the EDGE iPhone. This comparison is fair because even though the EDGE phone is downloading longer than the 3G iPhone, and the 3G iPhone is just playing the song while the EDGE iPhone is downloading this. If we were to be out and about using our iPhones, this would be the same amount of load time and use time. So keep that in mind.

(Note that the EDGE iPhone isn't displaying it's usage correctly because i just unlocked/activated it, which i believe is a bug)

Each picture has the 3G iPhone on top, GPS in middle (WITH WiFi TURNED ON), and EDGE on bottom. The point is to compare the battery icons. 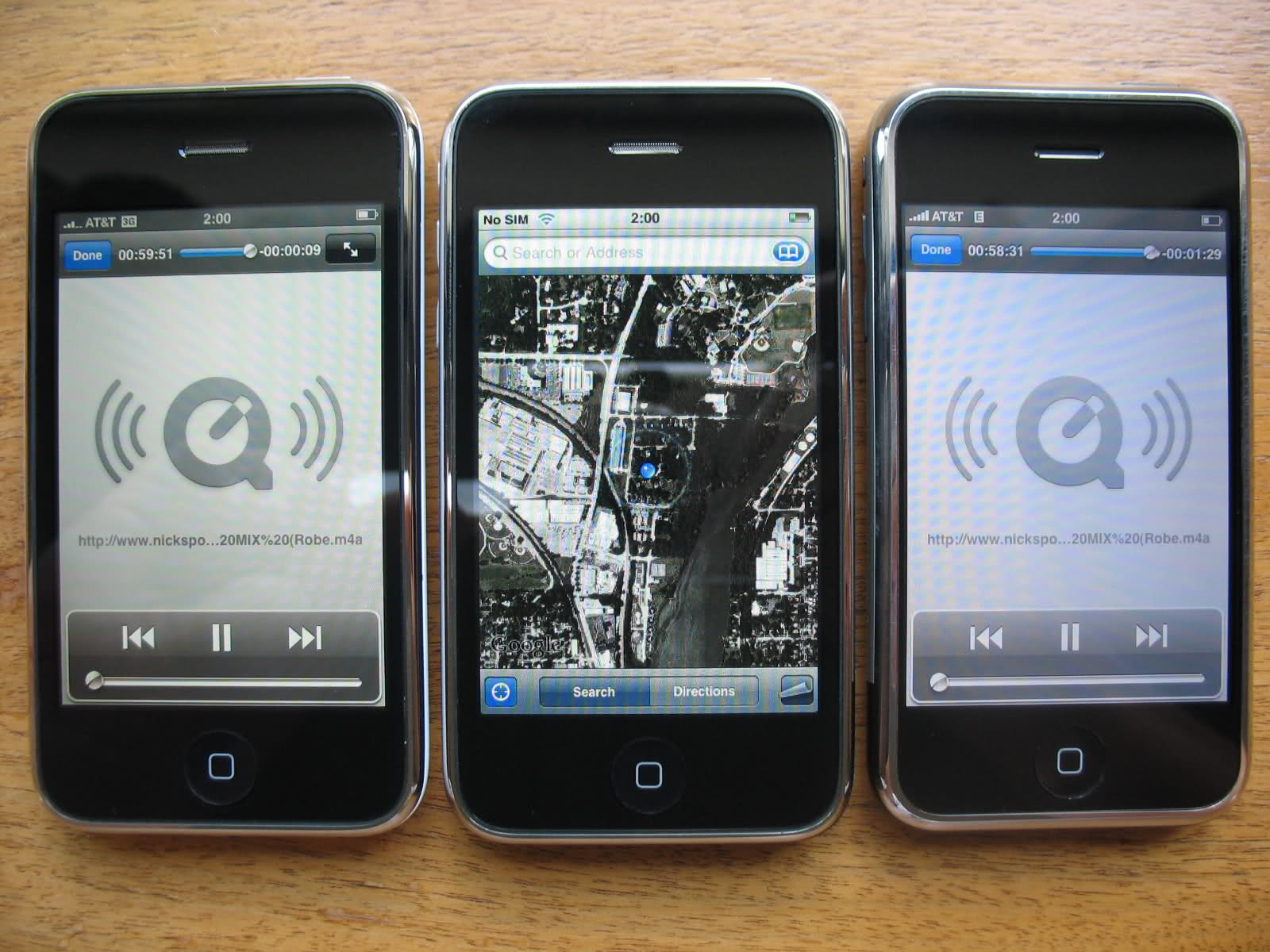 So in reality, what we get, is actually a better battery life because while using 3G we can be more productive. With our EDGE iPhones, it took longer to use Safari on the go, and since all the 1st gen iPhones are becoming older, they are losing charge.

i have no idea what those pictures are trying show, too jumbly.
Comment
0

I made some changes. The middle iPhone is with GPS constantly running, with WiFI on.
Comment

Wow, very informative. Basically what you've done though is prove that Apple's 5 hours of web-browsing on 3G figure is correct.

Thanks. I also tried to mainly compare the GPS longevity, and of course 3G to EDGE.
Comment
V

So with the phone with 3G iPhone GPS/wifi always on lasted the same amount of time as the 1st gen iPhone?
Comment

Van Wildonher said:
So with the phone with 3G iPhone GPS/wifi always on lasted the same amount of time as the 1st gen iPhone?
Click to expand...

Pretty much. It's pretty clear that the GPS is a battery drainer compared to 3G, but you can still get 3 hours of GPS.
Comment
A

In my experience, the GPS is the big battery killer in this device. With location services turned off, I can see a pretty good savings in battery power.
Comment

Yeah, i wonder if certain apps that use GPS cause some issues.
Comment

More i think about it, location services seems to be the real battery drainer.
Comment

that makes sense. This is the reason why wifi was recommended because you faster you data stream, then you can power down and use the buffer.
Comment
W

In google maps can the new 3G phone still triangulate your location or is it completly reliant on GPS now?
Comment

willcodejavafor said:
In google maps can the new 3G phone still triangulate your location or is it completly reliant on GPS now?
Click to expand...

It can do both. If there is GPS signal, it will rely on triangulation.
Comment

Dammit Cubs said:
that makes sense. This is the reason why wifi was recommended because you faster you data stream, then you can power down and use the buffer.
Click to expand...

Yep. When you are using 3G, you're loading the same web pages faster, getting more work done (browsing), and get get a slight increase in battery life.


willcodejavafor said:
In google maps can the new 3G phone still triangulate your location or is it completly reliant on GPS now?
Click to expand...

It's all GPS. ALTHOUGH i've had some instances when im indoors where it just keeps me in a blue circle, and no blue pin point. So even though there is no control, sometimes it can only rely on the locate me, but that is rare.
Comment

I think if you have time, you need to run one more test with a Sim, No 3g and Wifi on.

Use the wifi to stream the music. "No Sim" actually drains the battery faster, as my 1st gen iphone was down to 50% in 5 hours of pretty much doing nothing. (i have 2.0 firmware on the my old phone as well).


..... This is starting to make me feel like the new 2.0 firmware could be the real culprit.
Comment

Nice and very informative. Thanks for that.
I havent come across any battery issues as of yet and I have been messing with it a ton since its my first iPhone.

I should probably drain the battery completely out and then charge it up since I havent done that yet.
Comment
P


We were all expecting a bigger battery, and I can't verify this, but this page references the part number on the battery and lists a capacity of 1150 mAh, not the 1400 mAh in the original.
Comment

Dammit Cubs said:
I think if you have time, you need to run one more test with a Sim, No 3g and Wifi on.

Use the wifi to stream the music. "No Sim" actually drains the battery faster, as my 1st gen iphone was down to 50% in 5 hours of pretty much doing nothing. (i have 2.0 firmware on the my old phone as well).


..... This is starting to make me feel like the new 2.0 firmware could be the real culprit.
Click to expand...

Alright i can do that, just remember i only have a limited amount of iPhones to test at once
Comment

Very informative.
I like this. You really did go above and beyond to prove to
us that the iPhone 3G gets better battery life than the original iPhone.
Thanks!
Comment

I am fairly sure that PUSH is the main culprit and it would be great if you could run tests to show this?

At the moment I am running overnight tests with my phone sleeping for about 9 hrs then using it sparingly throughout the day.
First time with PUSH on my phone it only just lasted the night and was nearly out of juice in the morning! This had wifi OFF bluetooth OFF and Location services OFF.

I am trying to find a good battery life by having the settings adjusted to something that I can work with.

I disabled PUSH and then switched on WIFI (Apple shows that you get better life with wifi than 3G so made sense if you were fetching data from your email box), FETCH was active on 30minutes and bluetooth was ON (although nothing connected). Looks like I have about 35 - 40% battery life still left this morning but need to carry on throughout the day....
Comment

I have a 3G iPhone and a first gen iPhone i can run the tests on tommorow.

I can turn the push off on the iPhone 3G, and do the internet test again like i did with the first gen iPhone.

That would be great thanks!

a quick question, how the hell did you end up with THREE iphones??
Comment