The Weeknd's new single "Call Out My Name" was streamed 6 million times in its first 24 hours of release on Apple Music last Friday, March 30. As a comparison, Apple Music's streams of the song nearly doubled Spotify's 3.5 million streams in the same 24-hour period.

As reported by The Verge today, Apple Music's numbers on the new song are impressive given the context of Spotify's advertising push for The Weeknd's new album "My Dear Melancholy." On Friday, Spotify debuted two exclusive videos from the album, one of which was for "Call Out My Name." The Weeknd also tagged Spotify in multiple Instagram posts focusing on the new videos after the album dropped. 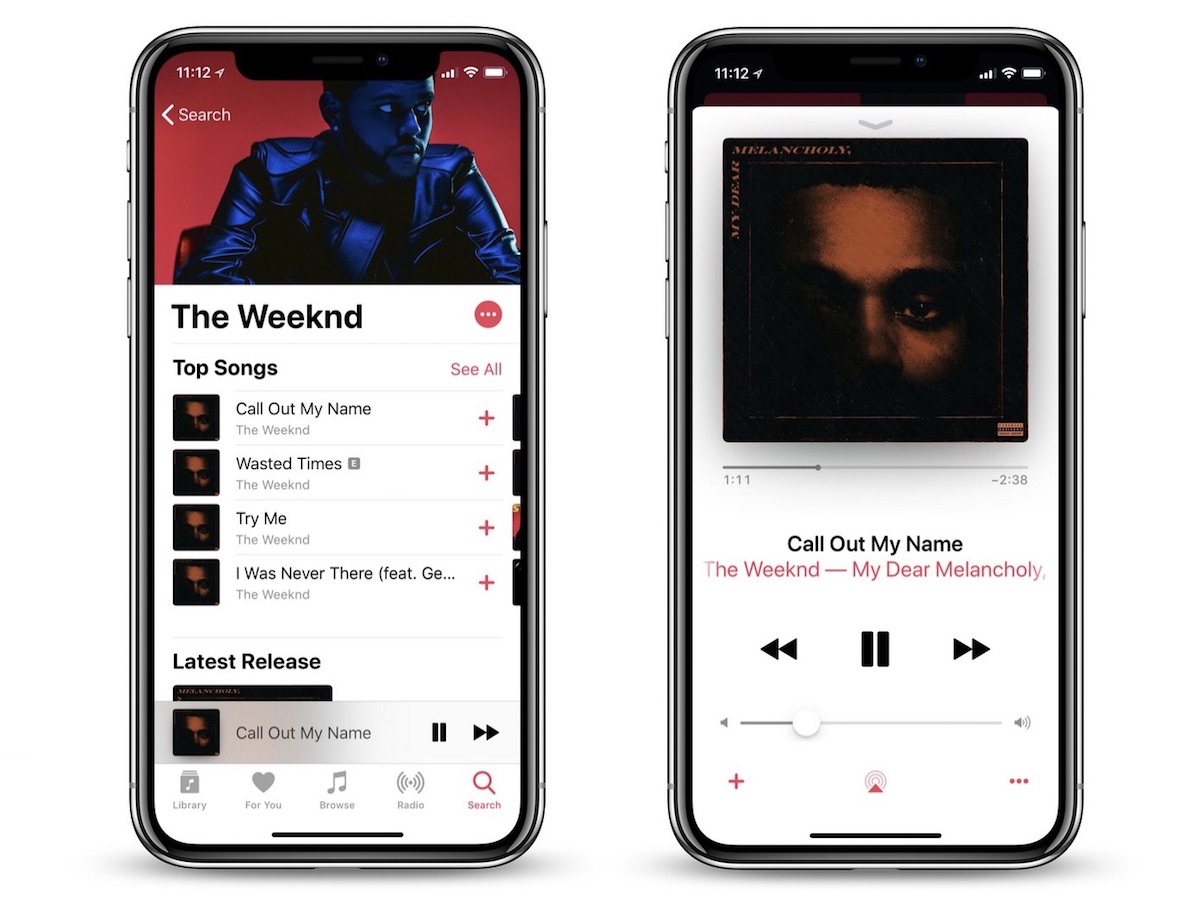 Still, Apple Music beat out Spotify for the single's streams on Friday, and in total Apple's service managed over 26 million streams for the full My Dear Melancholy album.

In March 2017, Drake's "More Life" album streamed 29 million more times on Apple Music than on Spotify in its first 24 hours of launch. Later in the fall, Post Malone dropped his single "Rockstar" and quickly broke Apple Music records with over 25 million streams in one week, grabbing 56 percent of the first week streams of the song in the United States.

At the time, Apple Music head of artist curation Carl Chery said that the company repeatedly wins the streaming game on songs like "Rockstar" because it's "ahead of the curve on them."

"A lot of times on those records where we outperform is because we're ahead of the curve on them, Chery says." Chery told me he heard "Rockstar" before it was released and knew immediately that it would be a hit, allowing Apple to move fast and add it to the relevant playlists in the first week. "And to a point, Apple Music becomes the destination where people want to hear that particular record," Chery said.
Click to expand...

In terms of paying subscribers, Apple Music had 38 million worldwide as of March 2018, and Spotify had 71 million as of February 2018. Spotify also has a free, ad-supported tier, giving it over 159 million listeners overall around the world.

The latest addition to Apple Music launched last week in the form of an overhauled music videos section, where subscribers can stream continuous video playlists, watch exclusive videos, and browse a deep back catalog of video content.

Update: Spotify now claims that streams of "Call Out My Name" reached 7.5 million in its first 24 hours of release, while the full "My Dear Melancholy" album was streamed 29 million times, surpassing Apple Music on both counts. The Verge asked The Weeknd's label, Republic Records, for the single's streaming numbers again, but instead of the previous 3.5 million number, the label said it was streamed 6.5 million times on Friday, which is still one million less than Spotify's claims. It remains unclear which number is accurate.

Apple Music's numbers on the new song are impressive given the context of Spotify's advertising push for The Weeknd's new album "My Dear Melancholy."
Click to expand...

Spotify's subscribers and users figures are fishy. In theory, Spotify has about as many subscribers as Apple in the US, or more, and many more abroad.

does this band know they spelled weekend wrong?
Reactions: japanime, omglolbbq, tennisproha and 8 others

Spotify's appeal comes out of its insane ability to give you obscure songs that have fewer than 1000 total plays worldwide that you love.
Reactions: japanime, Wide opeN, ZZ Bottom and 9 others

I get much better discovery on Spotify. Apple Music is so convoluted and it’s mostly the fault of iTunes being an app from the Byzantine empire.
Reactions: omglolbbq, Wide opeN, tennisproha and 3 others

Not surprising especially since each time I launch Apple Music on my iPhone they're always suggesting hip-hop/rap playlists on the "for you" section. Spotify on the other hand, they actually suggest playlists for music that more closely represent what I listen to on a daily basis (I do listen to hip-hop/rap, but not every single day).
Reactions: friedmud, Wide opeN, Watabou and 5 others
D

adamjackson said:
does this band know they spelled weekend wrong?
Click to expand...

ArtOfWarfare said:
Spotify's appeal comes out of its insane ability to give you obscure songs that have fewer than 1000 total plays worldwide that you love.
Click to expand...

Spotify's appeal comes out of its insane ability to give you obscure songs that have fewer than 1000 total plays worldwide that you love.
Click to expand...


Apart from that, the entire point of streaming services is to play any music you want when you want. Just because the radio plays the same songs doesn’t mean it serves the same purpose as a streaming service
Reactions: Paultmaine and TigerMSTR

Interesting and important given the value of those mainstream artists and songs. I don't think it speaks overall to Apple having more engagement or better delivery though, it's anecdotal but *could* be a sign of overall strength of their ecosystem.

I didn't see any disclaimer from the writer at The Verge whether he was long or short Spotify at their IPO pop.

I guess I'm in the minority, I tried Spotify and hated the layout and it was too dark. Apple Music is bright, with large album artwork. I've never had Rap/Hip-Hop in my "For You" suggestions, I always love songs I enjoy and it suggests more of the same style from other artists. I've discovered many new artists in the New Music Mix.
Reactions: ILikeAllOS, Paultmaine, RoobyRoobyRoo and 1 other person

I had been using Spotify before Apple Music came about, tried Apple Music for three months, saw what a mess it was just after launch, said “No, thanks!” and stayed with Spotify. Apart from the UI preferences, I see no single reason to switch, as Spotify does everything I need just fine.

The Weeknd is neither rap nor hip hop.
A

daduang said:
Not sure if serious but Abel Tesfaye chose to spell it as The Weeknd as to not be confused with an already existing Canadian band named The Weekend
Click to expand...

I guess the guy was dead set on the name. I figured they were just copying the startup trend of dropping vowels to be cool. i.e Rdio/Flickr.
Reactions: japanime

I really hope Spotify continues to thrive. Apple has been in the digital music business since 2001, and still their iTunes and Music apps suck. They just can’t move quickly enough.

It’s 2018 and I can’t add an MP3 of my own creation to my music library on my iPhone, and I can’t sync playlists of iTunes purchased music across devices without using iTunes on a computer? Ridiculous.

What is the purpose of this? Who cares? I've never heard of them. Is this supposed make Spotify users feel inferior and switch to Apple Music?

I liken this sort of "news" to the junk on Fox News. Pointless, yet still demeaning.
Reactions: Wide opeN
L

"Too much Hip-Hop/Rap on Apple Music and Beats 1"
"Spotify is SO much better! Discover recommendations FTW!"
"Who cares? What I want to know is when the new Macs are coming"
"Modern music sucks so much."

There, saved you guys time.
Reactions: Wide opeN, ILikeAllOS, Will.O.Bie and 4 others

Specifically fewer than 1000 listens? Might have to go back a few weeks to find the last time I specifically had that, but just this week it recommended "Earthspan" by Paul Mottram to me. Only 3703 total listens, and I'm probably 10+ of them.

djcerla said:
The Weeknd is neither rap nor hip hop.
Click to expand...

Actually, The Weeknd does classify under the hip hop genre (along with others):
https://en.wikipedia.org/wiki/The_Weeknd
Reactions: Darkwalker

This doesn't surprise me at all. I've never listened to Rap/Hip-Hop a day in my life but my "For You" section is almost 100% Pharrell Williams, Rhianna, Eminem, etc.

Apple likes to force whatever THEY think is popular/whoever paid them to be in the top spot for your "For You" section, not what you actually like to listen to. Something Spotify NEVER does to me.
Reactions: Wide opeN and Watabou
You must log in or register to reply here.
Share:
Facebook Twitter Reddit Email Share Link
Register on MacRumors! This sidebar will go away, and you'll see fewer ads.
Sign Up
Top Bottom