Thief Temporarily Makes Off With iPhone During GPS Tracking Demo 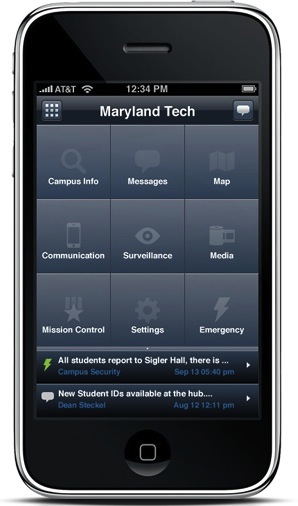 The San Francisco Chronicle relates the story of a thief who earlier this week briefly made off with an iPhone snatched right from a woman's hand in the city's South of Market neighborhood, not knowing that the phone was being used in a demonstration of real-time GPS tracking. The thief was apprehended about ten minutes later with the help of the location tracking.

Kahn said he had asked an assistant, Jordan Sturm, to take his phone out on the sidewalk so he could track her location on his laptop. Seconds after she left, though, a curious thing happened. She appeared -- according to Alert & Respond -- to be running at high speed down the street.

But Sturm no longer had the phone. After she hurried back into the office, she called police and the company relayed the phone's ever-changing location to officers.
Click to expand...

Alert & Respond is a product from Covia Labs designed for first responders such as law enforcement agencies to enable real-time location tracking and to permit officers to share various communication methods across mobile device platforms and agencies.

Thats what happens when you steal... sometimes.
W

these thieves need to familiarize themselves with the technology they're stealing if they want to be successful...good thing this one didn't bother.

Suuuure. The only record of this "Horatio Toure" is in a blog associated with the San Francisco Chronicle (to say that it's actually in the Chronicle is a bit disingenuous)

Sounds way too familiar. These stories surface every now and again, and are conveniently launched either before or immediately after the launch of a new iPhone. Criticism, please.
J

sounds set up by the security company to me
B

Seriously, how hard is it to turn off the damned thing?

Too bad the "Mission Impossible" iPhone 4 isn't real, imagine the look on that thieves face when the Li battery is ignited in his front pocket.

Sounds pretty staged to me

Saladinos said:
Sounds pretty staged to me
Click to expand...

I'm sure it's real. I've seen stupider things done by thieves and after hearing stories from my police friends it's even more plausible.

This is ironic and awesome....
W

I like how the screen shot implies there's a campus shooting going on.

But don't forget to pick up your new IDs on the way.
M

Unless the entire post is a fake and the quote from the police is made up entirely, I don't see how this could be a stunt--the guy posing as the thief would be risking (hell, practically guaranteed) jail time and a felony on his record. And if the police got word of the scheme, there'd probably be criminal charges against the company on top of it.

Not saying a company wouldn't try something like that--companies have done far dumber or sleazier things--but it certainly wouldn't be hard to believe. There are, after all, a lot of petty thieves in the world, and almost by definition they're not the sharpest tools in the shed--if they were, they'd be doing crimes that paid better or doing immoral but technically legal things like the smartest ones.

And assuming this is true, that's a rather hilariously unlucky dude.

Anything can "look" real if you want it to.

I wonder where Jason Chen was at this time?

We were in Florida and decided to walk next door to a grocery store after dinner. We arrived back at our hotel and soon realized that somehow between loading groceries into the car and strapping our son into his car seat, we forgot the diaper bag in the shopping cart which contained my new iPad 3G, our son's adoption papers and my hubby's wallet.

I sped back to the grocery store parking lot and there was the cart. It had been moved but it was now empty. I ran inside the grocery store and they told me nothing was turned in. I was frantic but I remembered that I could log into MobileMe from my iPhone and use "Find My iPhone". The little blue dot appeared and showed that my iPad was still in the parking lot. I drove around looking for another cart or maybe someone that grabbed it but was still in the parking lot. After an hour of searching and walking around in the Florida heat/humidity, my heart started to sink.

A security guard was walking by and I asked him if he could help me figure out the location. After a few minutes of getting his bearings, he led me over to the exact spot that the GPS was showing as the location. He said, "You know...this kind of makes sense. This is the car of a grocery store employee. Let me go back inside and put a little fear into them by letting them know you are tracking your bag with GPS." He came back out a few minutes later and said, "Let's see what happens."

Less than a minute later, the employee who owned the car comes out and says, "Oh hey! I found your bag!!" He opens his trunk and there was my bag! He tried to explain to me that he was going to bring it in after his shift was over and turn it in to lost and found. Of course, he was lying because he was the guy who brought in the carts and all the carts were inside except the cart that had our bag. I told him that he did not have to explain and that I was just so happy to have our bag back. (I didn't tell him that I was going to track my bag all night and call the cops as soon as I figured out where it settled in for the night!)

I am completely sold on the GPS on the iPad and iPhone because it tracked my iPad down to the EXACT parking spot where my bag was. I am so glad I had the Find My iPhone locator and I am so thankful to the security guard (who wanted only a compliment passed along to his supervisor).

Maybe so, but this sort of phone snatching is fairly common around here. I've had somebody try it on me a couple of times and fail. The "death grip" comes in handy for this.

Staged in that they invited the thief to do what thieves do... having an expensive cell phone snatched from someone's hand is not something you need to fake in SF.
V

Gelfin said:
Maybe so, but this sort of phone snatching is fairly common around here. I've had somebody try it on me a couple of times and fail. The "death grip" comes in handy for this.
Click to expand...

I just thought this was so funny. I instantly had the funniest mental images after reading it.