Following its March 9 media event where it introduced "Force Touch" trackpad technology for the new 13-inch Retina MacBook Pro and upcoming 12-inch MacBook, Apple opened up the feature to third-party developers by delivering developer APIs starting with the third beta of OS X 10.10.3. The APIs will allow developers to support the ability of Force Touch trackpads to sense multiple levels of pressure and perform different actions depending on how hard the trackpad is being pressed. 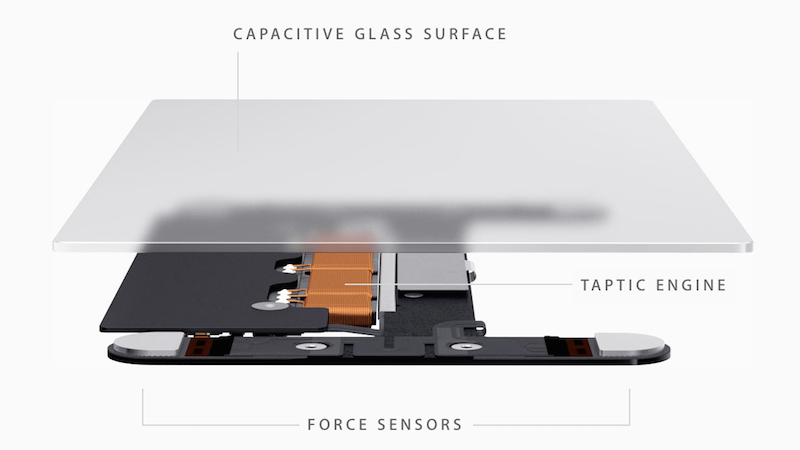 Apple has already taken steps to build Force Touch support into its own apps, as outlined in a support document. At the simplest level, the new Force Touch trackpads support a new "Force click" functionality, which allows a user to click on an item and then press a bit harder to activate a secondary function such as pulling up Dictionary or Wikipedia entires on selected text in Mail or Safari, a map preview when selecting an address, or Quick Look previews of files when selecting icons.

Beyond the single-level Force click, the new Force Touch trackpad also supports more advanced features through sensing multiple levels of pressure, allowing users to accelerate zooming in and out of maps or vary the speed of fast forward and rewind in QuickTime and iMovie. iMovie also supports "bumpy pixels" in which the trackpad gives subtle vibrational feedback during the editing process to let the user know when the end of a dragged clip has been reached or when cropped clips are in proper alignment.

While Force Touch is currently limited to the new 13-inch Retina MacBook Pro, the feature looks set to expand throughout Apple's product lineups, with the company's other notebooks gaining the technology as update cycles allow and the Apple Watch supporting it as a key interface mechanism at launch. Apple is also rumored to be bringing Force Touch to the iPhone later this year.

On the Mac side, Ten One Design today announced an update to Inklet, its popular third-party drawing software, that will bring "enhanced pressure control" to MacBooks with the new Force Touch trackpad. The company believes it is the first Mac developer to launch support for Force Touch.

Through Inklet's software, users have been able to draw and edit images within applications like Pixelmator and Photoshop for a while, by determining "stylus pressure" to differentiate between when to use thin and thick lines. Ten One Design notes that the introduction of the Force Touch trackpad makes its app not only more precise in designating pressure sensitivities, but more reliable as well. 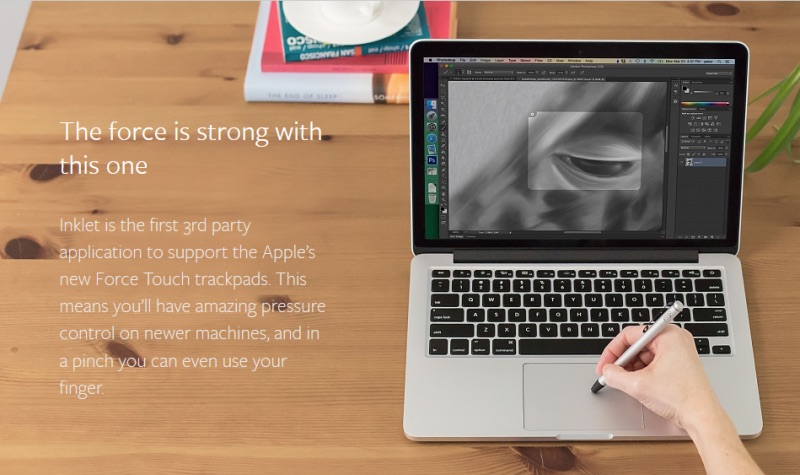 We think Inklet is the first 3rd party application to support the Apple's new Force Touch trackpads. This means you'll have amazing pressure control on newer machines, and in a pinch you can even use your finger.

Having a trackpad capable of measuring force is a big deal. Even though Inklet has always been capable of determining stylus pressure, this update makes measuring pressure simpler and more reliable. Kudos to the team at Apple who designed this precise and useful instrument.
Click to expand...

Beyond Force Touch support, Inklet's update also bring "improved pressure response" to MacBooks with the traditional multi-touch trackpad, along with the usual minor bug fixes. The company says Inklet will prompt users to update the app "sometime within the next three days", although users wanting to check out the new features sooner can hasten the process with the "Check for Updates" prompt in the Inklet menu.

Those yet to download the software can do so for $24.95 for the base app, or $34.90 for the app bundled with the company's Pogo stylus, from Inklet's official website.

"The Force is strong with this one".... guess I better get used to this joke
Comment
F

I guess the sensitivity and accuracy of these new trackpads is going to be incredible. Hopefully they'll release a new 14"/15" laptop with it soon.

I'm so excited by this. So many options with this.
Comment

I can hardly wait for the 15 inch Macbook Pro get updated.
Also it would be great if they update their standalone trackpad!!
Comment

terrible pun, and "the Apple's"

Would be nice they come out with a new bluetooth trackpad.
Comment
J

This should be extremely interesting for music apps and virtual instruments. With ForceTouch Apple just implemented the ribbon controllers that many synths and workstation have, right into the Mac trackpad. Pitch bend, oscillator frequency, filters, etc. can be controlled in many creative ways, ala Korg KaossPad.
Comment

Time to ditch my Wacom tablet?

Not yet for me, I love Wacom but Apple could open a new realm of possibilities here, especially when using the laptops on the road.
Comment

Trackpad with this tech would transform my iMac. Oh my...
Comment
T

I'd love to see how Apple can implement force touch in the iPhones and iPads given their extreme thinness and compact internals as well as how they can make iOS ever better with it and the amazing apps that will be developed. Some aspects of the world today are getting noticeably worse, but technology is so freaking amazing and, to quote Steve, magical!
Comment

For graphic designers, this could be huge. For the rest of the world though, I'm failing to see a use. For me, this could actually be more an annoyance than a blessing.
Comment

All those years of patents just suddenly added up to an under-the-radar shift in desktop computing.

It's exciting and unexpected to suddenly have something so new--and useful!--in "regular" computing.

(ForceTouch will be copied--badly--by every PC maker within 5 years. And some people will naturally think it's "the same" when it's a mere bullet point and not at all the same. Heck, PC makers still can't make an ordinary trackpad as good as Apple's.)


roadbloc said:
For graphic designers, this could be huge. For the rest of the world though, I'm failing to see a use. For me, this could actually be more an annoyance than a blessing.
Click to expand...

By default it feels exactly like an old-style mechanical pad--except clicking at the top isn't difficult anymore.

And you can customize the feel from there!

I don't see how this could be a bad thing for anyone.

As for the good, ForceTouch isn't just about pressure-sensitive drawing. It allows all kinds of things, some we haven't even thought of yet:

- Multi-level controls (like the "gas pedal" fast-forwarding) with custom feel.

- Haptic feedback while dragging: feel when you hit the end of a scrolling page or list, or when something you're dragging gets over a target. ANY user can benefit from that kind of added feedback. (But it will take time for developers to get used to what works best vs. what's a gimmick.)

- And, yes, pressure-sensitive drawing (as you say, a niche--at least, when doing it on a trackpad).
Comment

We think Inklet is the first 3rd party application to support the Apples new Force Touch trackpads.
Click to expand...

Wow!! They released their software with support for Force Touch even before the OS update and the Macbook itself!

I guess companies will keep making bonus claims like this as long as sites like MR credulously lap it up. But this sure makes Ten One Design look sleazy and MR look foolish.
Comment

hopefully this means better bluetooth stylus. yes there are drawing tablets, but having something integrated would be nice for portability.
Comment

I have been using a stylus on the trackpad since 2011, the downside has been that you need to have the trackpad pressed down all the time to do brushstrokes.

But this will solve that and gives pressure sensitivity.

To those who haven't had an opportunity to test out the new Force Touch trackpads: they're good. Really, really, really good.
Comment

ZMacintosh said:
i just wish there was a way to use the Apple iPad as a cintiq/wacom connected to your Mac as I dont see using a trackpad to use as a drawing tablet (novel) but the other ones out there do it better and precise
Click to expand...

There is.
http://astropad.com
"BUILT BY EX-APPLE ENGINEERS"

What happens if the user rests their hand on the trackpad at the same time as the stylus?

That picture shows someone drawing and their hand is in an unnatural position.
Comment

iSee said:
Wow!! They released their software with support for Force Touch even before the OS update and the Macbook itself!

I guess companies will keep making bonus claims like this as long as sites like MR credulously lap it up. But this sure makes Ten One Design look sleazy and MR look foolish.
Click to expand...

Not yet for me, I love Wacom but Apple could open a new realm of possibilities here, especially when using the laptops on the road.
Click to expand...

A 13" iPad with Force Touch could be a viable replacement for a 13" Cintiq, though. Kind of depends on how many levels of pressure sensitivity this has. Does anyone know? Even just 256 would be decent.


dZp said:
There is.
http://astropad.com
"BUILT BY EX-APPLE ENGINEERS"

I'm still surprised MR has never written about it.
Click to expand...

Without more bandwidth to pump video (because of lag or delay or whatever) and built-in pressure sensitivity, it's not ideal.

Force touch and USB-C (to Lightning connector, presumably) in a 13" iPad would do it.
Comment

nagromme said:
(ForceTouch will be copied--badly--by every PC maker within 5 years. And some people will naturally think it's "the same" when it's a mere bullet point and not at all the same. Heck, PC makers still can't make an ordinary trackpad as good as Apple's.)
Click to expand...

This is true. The trackpad is probably the one best thing Apple's done that no one else can even come close to touching. Hard as they try, no one else has been able to match them. I don't doubt we'll see some PC equivalents coming out in the near future.

But as for its usefulness for artists, photographers, or really anyone who wants to use a stylus, the PC scene has been going in an entirely different, more intuitive direction... 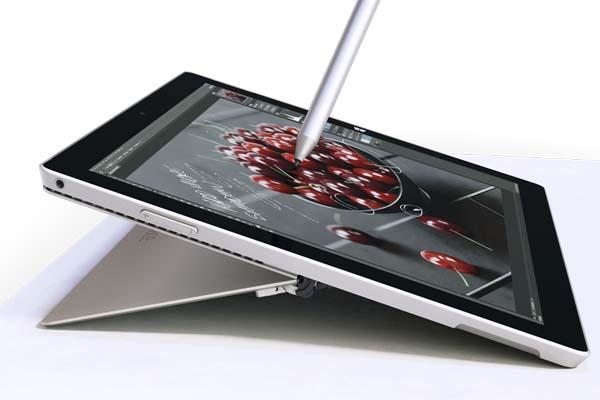 keysofanxiety said:
To those who haven't had an opportunity to test out the new Force Touch trackpads: they're good. Really, really, really good.
Click to expand...

jonnyb said:
What happens if the user rests their hand on the trackpad at the same time as the stylus?
Click to expand...

This is an incredible use for force touch. Your hand can now rest on the trackpad, while the stylus puts more pressure on the trackpad, thus your hand response is not recognized. Much better for artists!
Comment
You must log in or register to reply here.
Share:
Facebook Twitter Reddit Email Share Link
Register on MacRumors! This sidebar will go away, and you'll see fewer ads.
Sign Up
Top Bottom