Apple CEO Tim Cook has traveled to Germany this week to visit local Apple employees and App Store developers, and he even took a moment to celebrate the annual Oktoberfest beer festival in Munich. 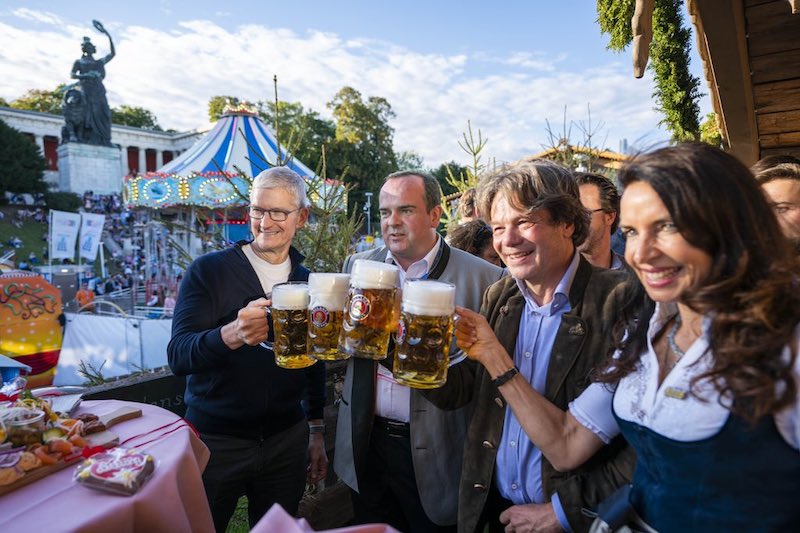 Cook has so far met with Algoriddim, makers of the popular DJ and mixing app djay, as well as one of Apple's design teams. Continuing his tour, he later met with developers of the Blinkist reading app in Berlin.

In an interview with German publication Bild, Cook said iPhone 11 sales are off to a "very strong start" and he also confirmed interest in offering the Apple Card anywhere possible, including Germany, although this will take time due to various regulations in countries around the world.

On Tuesday, Cook made various stops in France.

Cook routinely travels to countries around the world for meet and greets, having visited Canada, China, France, Ireland, Italy, the United Kingdom, and many other countries during his eight-year tenure as Apple CEO.

From an Apple intern to a developer success story! Wonderful to see how Karim Morsy and @Algoriddim are making DJing accessible to everyone. Thanks for a great visit! &#x1f3b6; &#x1f1e9;&#x1f1ea; pic.twitter.com/eUCBdjWrJO - Tim Cook (@tim_cook) September 29, 2019
Click to expand...

Among the many things our Bavarian Design Center team works on are the silicon chips that improve battery life. Thanks to our teams here in Munich for their superb engineering and attention to detail. Macht weiter so mit Euer großartigen Arbeit! &#x1f1e9;&#x1f1ea; pic.twitter.com/JZT0vVCdTb - Tim Cook (@tim_cook) September 30, 2019
Click to expand...

Impressed with the growing and talented team at @Blinkist. Helping everyone understand and experience some of the best non-fiction books is a great example of how a single idea from college can evolve into a solution for a problem we all share -- too little time! pic.twitter.com/8rRrms7BMY - Tim Cook (@tim_cook) September 30, 2019
Click to expand...

Visited with students and professors at Polytech Montpellier -- they're doing impressive things with Everyone Can Code. It's always exciting to see how Swift opens up new opportunities for students around the world. Merci d'avoir partagé vos projets !&#x1f1eb;&#x1f1f7; pic.twitter.com/d8Vk3Q2QXe - Tim Cook (@tim_cook) October 1, 2019
Click to expand...

It's been a busy and exciting few weeks for our retail team around the world! Wonderful to meet our customers and teams at Apple Kurfürstendamm &#x1f1e9;&#x1f1ea; and Apple Odysseum &#x1f1eb;&#x1f1f7; pic.twitter.com/dt284UDfnD - Tim Cook (@tim_cook) October 1, 2019
Click to expand...

I would bet my house that Cook couldn't finish one mug that size with out collapsing.
Reactions: jamesrick80, Wowereit, TracesOfArsenic and 26 others
Comment
R

Thought Tim was more of a cider man.
Reactions: davester, The Mercurian, augustrushrox and 2 others
Comment

You underestimate him Lol.
Reactions: mech986, BuddyTronic and valleian
Comment

zombierunner said:
Thought Tim was more of a cider man.
Click to expand...

Rumor has it that after the photo op Tim had exclusive access to the secret underground Beerfest and took part in the Das Boot challenge.
Reactions: pipis2010, FoggyCloud and 123
Comment

Now I have a face to recall for when I'm at 30% battery life at the end of the day after heavy usage.
Comment

I know nothing about financial markets or regulatory stuff, but I think Goldman Sachs have a banking licence here in the U.K (they have an online/app driven savings account), so would it really be that hard to launch the Apple Card here?
Reactions: jimthing and peterh988
Comment

Fun fact: About ten years ago the prime minister of Bavaria claimed that one would still be able to drive a car after two of those.
Comment

Yodarkus said:
Fun fact: About ten years ago the prime minister of Bavaria claimed that one would still be able to drive a car after two of those.
Click to expand...

I feel like I could drive as well. It wouldn’t be particularly good driving and I might hit the odd curb but capable of it yes.
Reactions: tridley68
Comment

Sasparilla said:
Nice to see. Sweet $#@%^ those are huge mugs of ale.
Click to expand...

Where I'm from it's regular size.
Reactions: mech986 and diego
Comment

Man would I like to interview Tim Apple after he finishes off the stein of Kölsch.
Comment

Tim, come back and launch Apple Tags and the AR glasses!
Reactions: citysnaps and alexandr
Comment