Today marks the 11th anniversary of Apple co-founder Steve Jobs unveiling the original iPad at the Yerba Buena Center for the Arts in San Francisco. 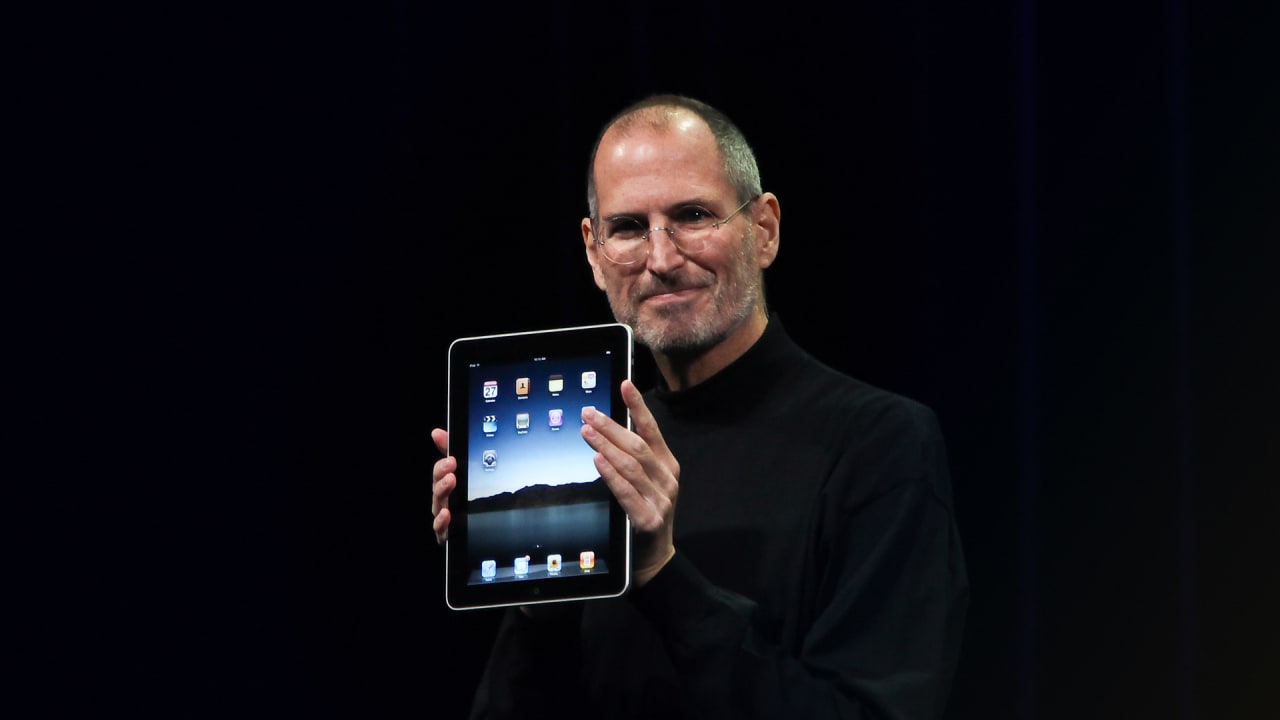 "iPad is our most advanced technology in a magical and revolutionary device at an unbelievable price," said Jobs, in a press release on January 27, 2010. "iPad creates and defines an entirely new category of devices that will connect users with their apps and content in a much more intimate, intuitive and fun way than ever before."

The original iPad featured a 9.7-inch display, a single-core Apple A4 chip, up to 64GB of storage, 256MB of RAM, up to 10 hours of battery life, a 30-pin dock connector, and a headphone jack. Notably, the original iPad did not have any cameras. Pricing started at $499 for the Wi-Fi model and $629 for the cellular model in the United States.

We've recapped some of the bigger milestones in iPad history below:Looking ahead, rumors suggest that Apple plans to release a new iPad Pro with a Mini-LED display, support for faster 5G networks, and a faster A14X chip in the first half of 2021. A larger 8.4-inch iPad mini and a new 10.2-inch iPad with slimmer bezels like the third-generation iPad Air are also rumored to launch this year.

I spent years trying to replace my MBPs with iPads; nowadays I seem to have stopped using iPads instead. ?

I just have one as a HomeKit hub; and occasional extra display (sidecar).
Reactions: mburkhard, macsound1, otternonsense and 5 others

I went out and bought one immediately! Thanks Steve! American hero!
Reactions: JimmyInFL, TechFann, ackmondual and 9 others

I snagged one on launch day. I’ve had different versions of the iPad ever since. Currently rocking the 2018 12.9” iPad Pro. Love it.
Reactions: JimmyInFL, BillyiPad95, Huck and 7 others

I am most productive with an iPad on the toilet. It's a total game changer.
Reactions: amartinez1660, chemenski, mburkhard and 27 others

Ah, yes, the unveiling of the so-called MaxiPad. ;-) I remember it well.
Reactions: J.J. Sefton, macsound1, BillyiPad95 and 3 others

MEMORIES! I loved the iPad when it launched. I had signed a contract that I would only carry Verizon but I saw so much potential in this device that I pre-ordered it for exclusive use at home. We played games for hours on it. I quickly realized I wished I could have it with me and when a big red version launched I grabbed one and gifted the original. That iPad 2 lasted me forever.

However, I do recall a little fiasco with the data pricing...
Reactions: AmazeSE, SBlue1 and Mike_Trivisonno
S

Can’t believe its been 11 years, I’m still banking on being able to fully code on an iPad instead of a MacBook one day. ?
Reactions: JimmyInFL, BillyiPad95, Big Ron and 3 others
S

The Samurai said:
I am most productive with an iPad on the toilet. It's a total game changer.
Click to expand...

It’s replaced the newspaper ?
Reactions: TechFann, BillyiPad95, Huck and 3 others
I

And 11 years later hitting "Download and Update" still means download and then finding out later you still need to hit "install" to actually update the iOS. lol
Reactions: J.J. Sefton, mburkhard, TechFann and 7 others
S

I had an iPad app in the store a week after the iPad was released. One of the first VNC apps available. Sold it for a $1 and made a couple of thousand by the time it tapped out. Which satisfied my goal: To make enough money to pay for the iPad I just put on my charge card.
Reactions: TechFann, Shifts, macsound1 and 13 others

11 years ago... Watching the keynote again, it's so weird to see an event on stage like that with the way the world has gone in the last year. I recall when the iPhone 4/WWDC 2010 hit 10 years old, I thought the same thing, 10 years later all is silent...

The iPad has really come a long way. I remember my iPad 2, where I could do little more than I could on an iPod touch with a few exceptions. Mostly made a nice YT player for the bedside for me. Now my iPP is a killer device that I can totally use exclusively for a week or so, forgoing my computer altogether. I can create, manage, consume media, and much more. Truly a product that came into its stride.
Reactions: BillyiPad95, lyngo, kltmom and 1 other person

And Phil from Modern family almost didn’t get his on day one. Come on, Claire get it together! It’s his birthday for crying out loud!
Reactions: ApeBot, bobob and Mike_Trivisonno

Bought a new studio app for my iPad Pro 2018 today, expanding its use to yet another major field in my life. This lovely machine keeps blowing my mind every day.
Reactions: TechFann, Madhava, BillyiPad95 and 1 other person

Have had three iPads in the last 11 years... now mainly use it for the Kindle app.
Reactions: Maconplasma, BillyiPad95 and Mike_Trivisonno

the first gen iPad design still holds up, even with the giant bezels
Reactions: TechFann, bobob, TheRoadRunner and 3 others

I bought the first that time online and asked my friend from London to ship it to Denmark as it wasn’t yet on sale here. That time iPad was commented as a bigger iPhone without calling option. Now got my third one using when don’t want sit at my desktop iMac.
Reactions: iGüey, centauratlas and Mike_Trivisonno
S

Wow time flies. I still remember when the news broke - the internet was not kind to the bezels or the name. Now 11 years later and the iPad is really the only successful tablet - Android tablets never really took off and Windows tablets are ok but feel more like laptops trying to be tablets.
Reactions: TechFann, BillyiPad95, Mike_Trivisonno and 2 others

March 2012: the moment I should have waited 7 months to purchase my first iPad ?
Last edited: Jan 27, 2021
Reactions: Mike_Trivisonno and Stridr69

Still using the iPad Air which I got 6 years ago. It still runs great and has support for almost all the apps I use. The battery has become bad but it still lasts a day of medium to heavy user.

The iPad is one of the greatest product Apple has ever created.
Reactions: TheYayAreaLiving 🎗, BillyiPad95, Mike_Trivisonno and 2 others
I

After having three different iPads till now, I’m really happy with my brand new iPad Air 4 in Sky Blue sporting 256GB! Have to say that truly is a quantum leap ahead from my old iPad 5.

I remember launch day vividly. I was aHUGE skeptic on the iPad until I walked into a Best Buy, messed around with it for 10 min and everything changed, it all made sense. The future in my hands. In 2015 I put my iMac in the closet, threw the computer desk in the dumpster and made iPad Pro my main computing device and never looked back.
Reactions: pianophile, BillyiPad95, Mike_Trivisonno and 2 others
1

I bought an iPad launch week, couldn't figure out what it was for and returned it a week later. Tried again with the 3rd gen and again later with the Air, both of which just collected dust and were resold within a year.

The OS has too many restrictions for integration in my workflow. I can't even stand using them for casual internet due to a lack of options for the browser (why no autoplay block or at least a true 3rd party browser???).

I really liked my Apple Newton 130 though.
Reactions: Madhava, Mike_Trivisonno, TheRoadRunner and 1 other person
M

And at initial launch this very forum trashed the iPad with several sanitary napkin and big iPod Touch jokes which were just rude AF. Glad that Apple showed the haters that the iPad has a big place in the tech industry and nearly every business uses them.
Reactions: TechFann, Madhava, BillyiPad95 and 2 others
You must log in or register to reply here.
Share:
Facebook Twitter Reddit Email Share Link
Register on MacRumors! This sidebar will go away, and you'll see fewer ads.
Sign Up
Top Bottom