The iPhone X launched today and the jury is still out in regard to what the device means for iOS gamers. It stands to reason that the new swipe gesture that replaces the home button is inevitably going to get in the way of some games which require either frantic or elaborate full-screen swipes, but in our experiences the few games that have been updated so far haven't had much of an issue accidentally triggering the home gesture. 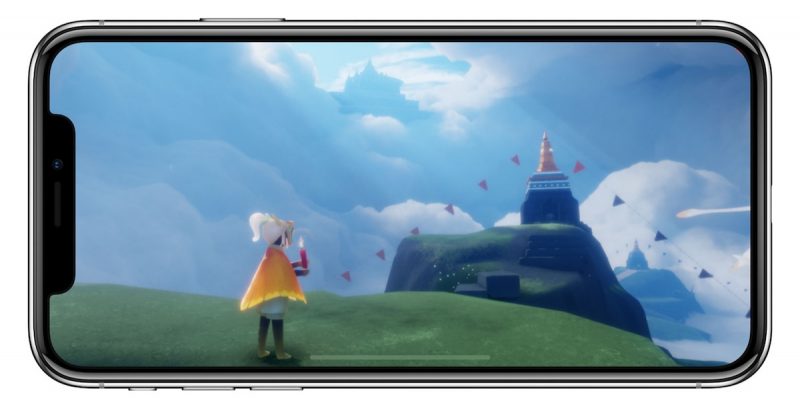 If you're looking for some new games to load up on your iPhone X, over at TouchArcade we've got a roundup of the best games for iPhone X. It bridges the gap between games that are fun on touch screens anyway, and titles that have been updated to support the full-screen resolution of the iPhone X. It's likely you own more than a few of these, as games getting zero day updates are typically all classic titles.


If you're looking for graphically impressive games to put the new GPU to the test, we've been posting roundups of the best iPhone games for that for years now. Whenever a new device is released we dig through the App Store and come up with the latest crop of 3D intensive games, and it seems like more than anything else the list just evolves instead of being totally fresh each time. The Infinity Blade games are still some of the best looking iOS games, but The Witness is a recent addition to our list of showstoppers.

We're spending tons of time testing all sorts of games on the iPhone X to continue to flesh out our best games for iPhone X article, which is no small undertaking given the enormity of the App Store catalog. Our community is also at work searching for great iPhone X games, but like most new hardware launches, apps and games that take advantage of everything on day one are few and far between.

Be sure to drop any particularly great iPhone X games that you've played in the comments, and in the meantime, follow along with us over on TouchArcade for all the latest news, reviews, and loads more covering every aspect of mobile gaming. We'll be back with a more traditional news roundup next week, and hopefully by then I'll have an even more exhaustive list of must-haves for the iPhone X.

What game is that in the image?
Reactions: augustrushrox, dan110 and FelixDerKater
Comment

Didn’t know “ios gamers” was a thing. They make it sound like an esport lol
Reactions: augustrushrox
Comment

nikster0029 said:
What game is that in the image?
Click to expand...

I believe it’s Thatgamecompany’s upcoming game ‘Sky’. Looks lovely eh? Though perhaps a slightly odd choice of a leading image for an article about what games to play if you just bought an iPhone (X or otherwise) because I don’t think er, that game(!) is out yet... but I think it’s due out soon anyway so I guess people can look forward to it.

The notch. Can’t unsee it. It is like those optical illusion that once you see it, it’s always there
Reactions: Regbial, cableguy84, augustrushrox and 6 others
Comment

They need to blacken the notch area and make that the home button area or something
Reactions: augustrushrox, Delgibbons, Avieshek and 2 others
Comment

Pac Man is gonna conflict with the gestures. It already has with iOS 10
Comment

I’m sorry, but that notch is hideous. I hope Apple comes up with a solution for it for its next iPhone. It so distracting
Reactions: Regbial, cableguy84, augustrushrox and 3 others
Comment
P

I have been using iPhone X for the past six hours and I have to say anyone who says the notch fades away after a while is full of sh*t! It sticks out like a sore thumb when playing games and watching video. And the persistent line at the bottom of the screen is obnoxious. After a few minutes of using the phone I get it... you need to swipe up from the bottom. There should be a way to turn it off. It gets in the way and is just as annoying as the notch when watching video. Overall the phone feels very high quality but the notch is bad design and the that line is as well.
Reactions: cableguy84, augustrushrox, dan110 and 9 others
Comment

jonnysods said:
They need to blacken the notch area and make that the home button area or something
Click to expand...

They are literally not allowed to do that. It’s against Apple‘s guidelines and would lead to a rejection on submission to the App Store.
Reactions: dan110 and Avieshek
Comment

Not one, but two obnoxious things floating on the screen. There’s no way this is immersive.
Reactions: cableguy84, dan110, tallscot and 2 others
Comment

This notch, is like an unresponsive button continuously distracting irritatingly to a gamer's paradise.
Reactions: cableguy84, tallscot, BruceEBonus and 1 other person
Comment

(I may have mentioned the notch once. But I think I got way with it)
Comment
P

I think they should allow it as an option IMO. Rounded corners and distracting screen elements put me off.
Comment
M

I stopped caring about mobile gaming years ago. Swiping and onscreen buttons just aren’t that appealing to me, and it results in a lot of unnecessary wear and tear on the device.
Comment
L

fel10 said:
I’m sorry, but that notch is hideous. I hope Apple comes up with a solution for it for its next iPhone. It so distracting
Click to expand...

I dunno....I guess I never gamed much on my phone. Even with the plus models...
Comment

Not having a tactile Home button is almost as dumb as a pro laptop only having Thunderbolt 3.

The notch is, by far, the dumbest thing Apple ever did, and I’m including the hockey puck mouse.
Comment
P

fel10 said:
I’m sorry, but that notch is hideous. I hope Apple comes up with a solution for it for its next iPhone. It so distracting
Click to expand...

I am not sure we can take your design comments, if that Avatar photo is you... is it 1997 Eminem?
Reactions: -BigMac-
Comment

I mean that should be apples solution
Reactions: -BigMac-
Comment

Lerxt said:
This post brought to you by the Samesung Army. “You say, we pay!”
Click to expand...

Lol, and yet if you look at my signature, all I own is Apple stuff. You fanboys are pathetic lol. Put down the cool aid bud.
[doublepost=1509813390][/doublepost]

prowlmedia said:
I am not sure we can take your design comments, if that Avatar photo is you... is it 1997 Eminem?
Click to expand...

No, just an attractive guy from Georgia. And how my design comments have anything to do with my pic? Lol the reach.
Comment
A

Slightly different UI design and of course there will be a step change. It’s down to developers to make the necessary changes.
Comment
G

Developers have options in regards to usable area for iPhone X. If you look at the actual guidelines, there's no Apple requirement for the live area to include the notch at all.