I haven't seen a thread on this, so I figured I'd start one. Hopefully we can get a lot of participation on this and it'll become a sticky.

So, what did Apple leave out of Leopard that was supposed to be in Leopard? i.e. demoed and touted by Steve.


Jobs mentioned "secret features". So where are they?

What else was left out?

** This list is mainly for tallying the features that were supposed to be in Leopard, but got dropped inexplicably. **

Didn't Steve Jobs say on the WWDC this year that you can switch between Windows and MacOS really fast? I always wondered how this could be possible without virtualization, but nothing like this is included in Leopard - except that Leopard boots and shuts down fast, but that doesn't count for Windows (XP or Vista), which booth need long to boot on my MacBook .. (especially XP needs much longer than on my old (!) PC).
Comment
J

No iPod Home
No "Fast" switching with Bootcamp

Oh and you can make your own stacks - just drag a folder to the dock and everything in that folder shows in the stack!
Comment
S

Hero i think it was called, looked pretty cool
Comment
I

joshysquashy said:
No iPod Home
No "Fast" switching with Bootcamp

Oh and you can make your own stacks - just drag a folder to the dock and everything in that folder shows in the stack!
Click to expand...

By iPod Home are you meaning Portable User accounts that can be stored on external drives such as the iPod. If so I don't remember it supposidly being intorduced in Leopard, however thre is a similar feature now avbailabe in Server

External Accounts is a new Portable Home Directory feature that allows you to store a users home directory on a portable FireWire or USB drive. The account can be fully managed using Workgroup Manager and protected using FileVault.
Click to expand...

Resolution Independence is in Leopard, change the screen scale factor to 2x or 3x and you can see that text and controls remain sharp.
Comment

An update re: portable user accounts. There is some stuff in the standard release that i just found (while looking for something completely different)

Time Machine Backups to a network device (ie. Disk hanging off of AEBS or an NAS device).

The forums are buzzing with work arounds. I'm a little surprised Apple pulled this...
Comment

Anyone else have any items that were planned for Leopard, talked about, and/or demoed that suddenly went "missing" (dropped) by Apple?
Comment
H

When I connected my external monitor to my laptop for the first time after upgrading, Leopard mirrored the displays and my laptop LCD ended up displaying at 1024x768. When I went to change this with System Preferences, the window took up the exact percentage of my screen as it did when at the native resolution of my LCD, 1440x900. In Tiger, all I'd see was a giant window that didn't fit on the screen. With Leopard, that giant window was scaled down and fit perfectly.
Comment

HD DVD support. I never saw screenshot proof but heard that earlier versions of DVD Player had partial support for them (preferences and logos, even though it couldn't play them).
Comment
M

Leopard definitely needs a FULL firewall with the ability to block outbound traffic.

DVD Player needs disc caching. You know, cache the disc to RAM and play the movie from there. Saves battery life, reduces heat, increases the overall live of the optical drive.

DVD Player also needs proper audio down-mixing and decoding. Windows DVD players basically fold the 5 channels into 2 with no audio tossed out, and they decode the .1 LFE (subwoofer) channel and throw that into the mix too. Watching a DVD on good headphones on a Windows machine will outperform any of those sub-$500 HTiB systems you get from Best Buy, Wal-Mart, etc. Why can't Apple do this? WinDVD, PowerDVD, etc. have all had proper decoding and down-mixing since the late 90s.

DTS decoding in DVD Player would be nice as well.
Comment

As far as I can tell, there is no AppleWorks plug-in for Quick Look.
Comment

I know it was never mentioned but i'd like the ability to save the workspace between log outs / power cycles. By this i basically mean a variant of safe sleep that is persistent over log outs.
Comment

Just an aside, I wish people would stop griping about the lack of secret features. Jobs said there were aspects of Leopard he wasn't ready to announce yet when Leopard was first demoed. He showed those "secret features" at WWDC. Sure they weren't mind blowing, just a shiny dock and stacks, but its not his fault that we got ourselves in a rumor frenzy.

I'm a little surprised at the lack of the hologram in iChat, seeing how it obviously worked. And the time machine AirDisk support.
Comment

xUKHCx said:
An update re: portable user accounts. There is some stuff in the standard release that i just found (while looking for something completely different)

that was in tiger too. something to do with server based sync. Like microsofts roaming profiles.
Comment
B

Today we want to give you a preview of Leopard. First I want to tell you there are some top secret features that we're keeping close to the chest."
Click to expand... 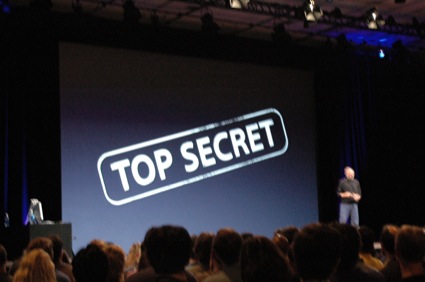 he then went on to list the "non-secret" parts of Leopard:

The secret features? Apparently making the finder look like iTunes, plus the most poorly executed idea ever (Stacks).

I wish they had kept that last one a little bit "closer" to the chest. In Steve's gall bladder, maybe?
Comment

pilotError said:
Time Machine Backups to a network device (ie. Disk hanging off of AEBS or an NAS device).

The forums are buzzing with work arounds. I'm a little surprised Apple pulled this...
Click to expand...

There seems to be problems with holding a wireless connection to the Airdisk. I'm sure Apple knew about this and that's why they pulled this feature. I think that once they have this issue resolved we'll see the implementation of Time Machine backups over network devices.
Comment

The Mona Lisa / Ballmer iChat / Photobooth effect...
And the upside down too!

brewno said:
The Mona Lisa / Ballmer iChat / Photobooth effect...
And the upside down too!