Digital Daily reports that the USB Implementers Forum (USB-IF) has responded to Apple and Palm regarding the two companies' ongoing spat over Palm's attempts to allow its Pre smartphone to sync media directly via iTunes. Despite Palm's apparent misuse of Apple USB Vendor ID codes, Palm reported Apple to the USB-IF for improper use of its own Vendor ID to shut out the Pre.

Palm had argued that Apple, by issuing an update to iTunes that used the USB Vendor ID number to prevent the software from automatically transferring content to any non-Apple USB device, had violated "the letter and spirit of the USB-IF Membership Agreement" which is "intended to facilitate interoperability between USB devices, not to regulate the content that flows between them."
Click to expand...

Today's response from the USB-IF not only dismissed Palm's complaint against Apple, but also turned the tables on Palm by requesting an explanation of the company's apparent violation of USB policies in using Apple's USB Vendor ID. From the USB-IF's letter:

I attach for your information the USB-IF's adopted and published policy regarding Vendor Identification Numbers (VIDs). Under the Policy, Palm may only use the single Vendor ID issued to Palm for Palm's usage. Usage of any other company's Vendor ID is specifically precluded. Palm's expressed intent to use Apple's VID appears to violate the attached policy.

Please clarify Palm's intent and respond to this potential violation within seven days.
Click to expand...

With several moves having been made by each side in the cat-and-mouse game over Palm Pre media syncing with iTunes, Apple currently holds the upper hand, having disabled Pre syncing yet again with the release of iTunes 9 earlier this month.

Looks like Palm has their foot stuck in their mouth

This report is kind of funny considering the compliance organization told Engadget they wouldnt comment publicly. It looks like someone leaked the letter to D!.

Everyone saw this one coming. Palm the next MSFT? Create your own stuff.
Comment
M

Bummer sucks to be palm. I think they had the right idea, but they pushed it in the wrong way.
Comment

shneady said:
Looks like Palm has their foot stuck in their mouth

And one ex-Apple employee's head in a different location.
Comment
T

Someone at Palm listened to the string of logic they wanted to hear. Namely, a minute violation in the letter of the USB standard would allow them to piggybank off of Apple's ecosystem, even if it meant they could in the process violate DRM agreements. It would have been a huge can of worms had the opinion/ruling gone the other way. Palm's argument defies common sense, but because the listened to what they wanted to hear, i.e. there is a loophole that entitles Palm to a shortcut, Palm instead ended up getting spanked.
Comment

Good, they can burn to the ground for all i care. Make your on software Palm
Comment
X

page 2, who cares? i am sure "atta go apples" will drop from the sky and some how safari will be snappier
Comment

Ha HA! Take that Palm... What were they thinking?
Comment
O

Good the cards got turned.
Stop leeching off Apple.
You too, M$
Comment
S

*LTD* said:
Really now, was there ever any doubt?
Click to expand...

Seriously... I was surprise that Palm even tried to push this pathway given they clearly violated an explicit aspect of the agreement for VIDs while attempting to argue something not really addressed by the agreement.
Comment

That's the right decision in this situation. Palm shouldn't use this means to achieve their end. If they are truly acting in the public's best interest they should file a suit against Apple. I suspect, though, that this will be quietly settled in the background.
Comment

ZOMG HOW DARE YOU .. YOU EVIL PALM COMPANY! HOW DARE YOU! EVERYONE NEEDS TO.. not compete with the iphone!
Comment

To be fair, it's not about the contracts and the letter of the law, it's about what's right in the eye of the consumer.

Still, I side with Apple. Their software, they decide.
Comment

tofagerl said:
To be fair, it's not about the contracts and the letter of the law, it's about what's right in the eye of the consumer.

Still, I side with Apple. Their software, they decide.
Click to expand...

You do realize if there weren't a compliance standard the whole USB standard would be royally screwed up don't you?
Comment

nwcs said:
That's the right decision in this situation. Palm shouldn't use this means to achieve their end. If they are truly acting in the public's best interest they should file a suit against Apple. I suspect, though, that this will be quietly settled in the background.
Click to expand...

File a suit against Apple for what exactly ?

If Palm is truly acting in their user's best interest, they should just write some syncing software already.
Comment
H

Score one for corporate greed...

And less interoperability for consumers. That blows.

haunebu said:
And less interoperability for consumers. That blows.

Yeah, screw that, iTunes should be apple to sync with my printer! After all, it's a USB device. And what about the USB humping dog : 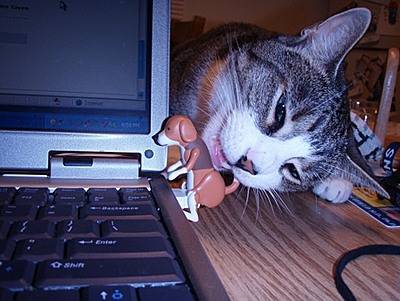 iTunes should sync with that also, it's USB too!

Face it. USB interoperability doesn't say anything about particular software interfacing with particular hardware. It just says how a device should present itself to software so that the programmer can decide if it's something that's supported or not. I don't see why Apple would have to invest years into iTunes and then just let some other company profit from it.

haunebu said:
And less interoperability for consumers. That blows.

What did you expect, that the USB-IF was going to force open Apple's own software??
Comment

I wonder how much Apple paid the USF-IF.....
Comment

RIM has long had Blackberries syncing with iTunes via Apple's more official method (the XML database) for supporting 3rd-party access to your music library.

Palm can do the same. Instead they cut corners and made their customers be the guinea pigs in a (technologically clever) experiment they knew from the start was likely to fail.

All of which is fairly harmless in the end especially if you're not a Palm user. But it's a very weird choice for them to have made.


haunebu said:
And less interoperability for consumers. That blows.

Then just ask Palm to do what RIM did, and enjoy syncing your iTunes library to your Palm hardware The method Palm used (pretending to be an Apple device) is simply the wrong method. A clever concept, but not smart.

It avoided Palm having to write any companion software of their own, but that's what they need to do. Then that software CAN talk to your iTunes library (see also Blackberry) and you can enjoy both iTunes and your Palm Pre together.