What do you think of San Francisco?

I was comparing Helvetica with San Francisco, and I think San Francisco is much more legible. I thought it was narrow than Helvetica, but it actually takes up the same horizontal space, it's just the the letters are narrower and there's more space between characters for the default tracking. SF is not as pretty as Helvetica, but I think that hurts helvetica's legibility. The consistent curves and wide letters look nice, but are harder to differentiate. San Francisco looks much more utilitarian. 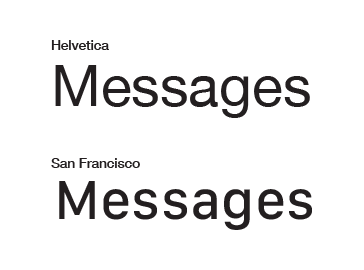 Helvetica is trying to sell me something

I find San Francisco to be slow and deliberate, as in 'You Are Being Told
That You Must Do This, Because Government... '

and Helvetica is (by comparison) a little too sassy, and is basically trying to sell you something. Something sophisticated. (at least to the teeming masses)

I use Helvetica, of course.. when Dom Casual is unavailable

San Francisco is a hardware font. It's the new font for the upcoming keyboards too (such as the new MacBook.) I think it's meant to convey a sort of engraved/stamped sense to the Helvetica style and I like it as long as it's not used in places where I have to interpret the text dynamically.

For example, the font choice for a watch face complication is fine. There are a very small number of things that will ever show up there, like a day name or month name or whatever. But as a font for a message, that's less awesome, as I can't so easily predict what it will say. For a keyboard? Sure, no problem.

And with the glyphs as they are, it blends better in design terms with the common shapes on Apple products than Helvetica does. Plus, I don't think Helvetica seems serious enough for a "permanent" label in the same metaphorical range as stamped text.

So yeah, I think it's a good font for its intended use.

The font is clearly more legible when read while it is moving. Seeing this on my iPhone and shaking the screen around the SF font was far easier to read. Perfect choice for the Apple Watch

Not trying to be snarky - I'm genuinely curious. What does this question have to do with the Apple Watch?
Reactions: Newtons Apple
J

Caliber26 said:
Not trying to be snarky - I'm genuinely curious. What does this question have to do with the Apple Watch?
Click to expand...

You can't tell from the context of the thread that the San Francisco text font is used on the Apple Watch?

Cayden said:
The font is clearly more legible when read while it is moving. Seeing this on my iPhone and shaking the screen around the SF font was far easier to read. Perfect choice for the Apple Watch
Click to expand...

It's a new font for Apple Watch. It looks stellar too.
M

I think the idea with sanfrancisco is that each character "block" takes up the same amount of space but it's not quite a fixed-width font. I personally find san francisco easier to read than helvetica but generally speaking they're both nice fonts and beat times new roman, calibri and Tahoma by a long shot

Be sure to wear flowers in your hair.

Honestly, I don't care what font they use. If it's legible, it's cool with me.
Reactions: Newtons Apple
F

I think it looks great here...

hemolyzer said:
I'm not autistic so I don't really see a difference.
Click to expand...

So you have to be autistic to be a designer or interested in typography?

I think it looks great, especially on the new MacBook keyboard. Hopefully it makes it's way to all of the other keyboards soon as well.
T

I think it's fantastic. I certainly hope it comes the system default in OSX 10.11 and iOS 9.

Totally agree. Wish my MacBook had that new keyboard for many reasons including the San Francisco font.

By the way.. Does anyone have the font to download?

It certainly does, but I doubt that the hinge will allow the display to swing back far enough, out of sight against the desk, enough for the user to enjoy the stylish uppercase keyboard in lieu of a display.

I have tried to download it several times as I really like it. Apparently problems appear when it is scaled up so Apple is not allowing it to be used except on the

Tom G. said:
problems appear when it is scaled up
Click to expand...

Please, can you provide a link?